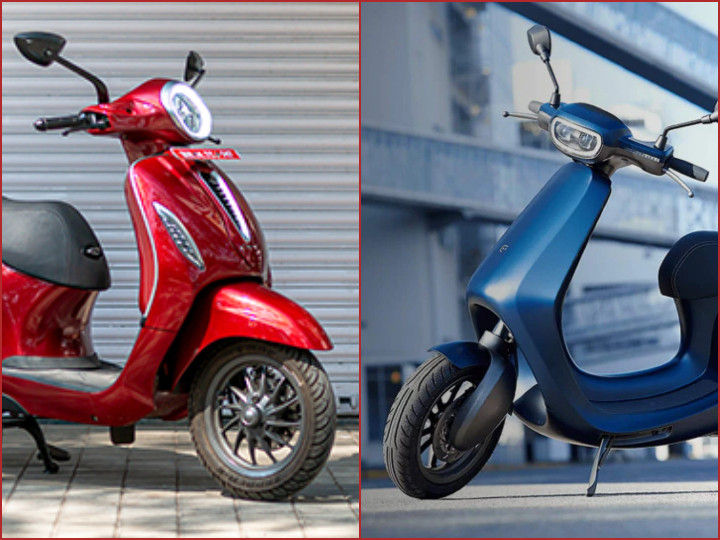 Ola Electric has dropped the big news that it will be launching its newly acquired Etergo AppScooter in India soon. This retro-futuristic scooter will compete against other homegrown electric scooters here, more specifically the retro-styled Bajaj Chetak. Here’s how the two scooters stack up against each other on paper:

The Chetak electric scooter gets a fixed battery pack and can be charged via a 5amp household socket. While 85km might not seem much, it is enough for a day’s worth of commute. Etergo gets swappable banana-shaped modules, three of which can be fit into the AppScooter. At 8.5kg each, these packs are lightweight and get a sling attachment to carry around. You can use a single battery pack that claims to offer a range of 80km or you can put in three battery packs and extend the range (claimed) close to 240km. That’s almost as much as a conventional scooter. The claimed 240kmph range though is based on a riding speed of 20kmph. In the real world, we would expect a range of around 150km to 180km.

The AppScooter gets a larger capacity AC brushless motor that is tuned to offer max torque from 0rpm all the way to its 45kmph to speed. This flat torque band means instant acceleration at any speeds below 45kmph which should make it a hoot to ride in the city. Due to certain regulations, the AppScooter's top speed is limited to 45kmph in Europe. The India-sped model will have a top speed of around 80kmph. The Chetak can easily cross 60kmph. In our tests, we saw the scooter reach 69kmph with ease.

While the Chetak gets an old-school trailing link front suspension, Bajaj has tuned it so well that it works as efficiently as a telescopic fork. The AppScooter gets a unique single-sided front fork with a shock absorber mounted in the headstock. Its horizontally mounted shock absorber should make more space for efficiently mounting the electric motor and battery pack. The efficient packing also allows the AppScooter to have a large 50-litre underseat storage bin. The Dutch scooter also gets better braking and fatter wheels. Both scooters get regenerative braking.

The retro-styled Chetak gets all-LED lighting with rear Audi-esque sequential turn indicators, keyless ignition, and a retro-looking round digital instrument console that shows speed, range, battery level, and even controls for music playback via the left-hand switchgear. It also gets Bluetooth connectivity and IoT connectivity that shows vehicle location, geo-fencing, and vehicle status on the dedicated Chetak app.

True to its name, the AppScooter gets a tablet-sized instrument console that can be accessed via buttons on the left and right switchgear. The Android OS has a smartphone-style layout and shows navigation, music controls, and notifications. The idea here is that you do not have to take your hands off the handlebars to answer a call on your smartphone or change music.

The Bajaj Chetak is currently available in Bengaluru and Pune. Bajaj’s plans to launch the Chetak in other cities has been delayed by 4 to 5 months due to the COVID-19 lockdown. With Ola Electric taking over the Dutch brand Etergo, the AppScooter will come to India. It will be launched in European countries though so an India-launch can be expected next year.