There’s a lot that’s new and different in the 2020 Hyundai i20, most of which will be explored in the first drive review. Here’s exactly what you need to know. 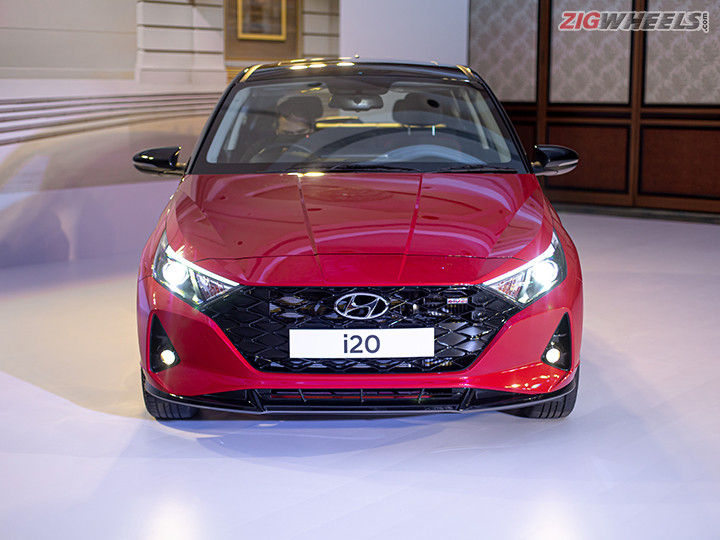 The new i20 still looks European but while the old car’s design was more subdued, this one’s more daring. There’s dollops of cuts, creases and character lines that make it look nice and aggressive. The word ‘sporty’ is often overused when it comes to describing car design but here it genuinely feels appropriate.

What stands out the most is the new car’s stance. There’s a 10mm increase in the length and wheelbase, the height’s unchanged and it’s 41mm wider now. In fact, it sits lower in height vs the Baleno/Jazz/Altroz but is wider than all of them. This low and wide stance lends the car a hot hatch-like character which shines especially in this red colour.

The 16-inch wheels look sharp, if a bit overstyled; the fuel cap blends in underneath the tail light seamlessly and the use of chrome is gentle. There are even two different designs for the black front grille: a diamond pattern for the turbo petrol and a more studded pattern (like in the new generation Tucson) for the other versions. A big talking point is the connected tail lamp design that looks like it tucks the car’s rear end inward.

But then there are some quirks as well. The lines from the tips of the headlights and tail lights don’t connect and the front and rear door handles aren’t aligned with each other. The strangest touch is the thick chrome garnish that runs across the rear and into the tail lamps. This isn’t something seen in the Euro spec i20 and it makes it look like the car has braces at the rear.

Hyundai hasn’t picked up where the outgoing i20 left off. The new generation gets a completely different interior, one that isn’t as subdued. Hyundai’s traditional beige/black combination has been skipped and it’s now all black in every variant, which is in keeping with the new model’s sportier intent. This is complemented well by the Creta-derived steering wheel.

Running down the middle of the dashboard is a continuous AC vent design underlined by a very smoothly finished plastic panel in the centre console. Now, while the cabin design is unique to the i20, it still is ergonomically sound and easy to get used to whether you’re coming from another Hyundai or another brand altogether.

Fun fact: While Hyundai has used different prefixes/suffixes for its car names (Grand i10 Nios, Santro Xing, Sonata Embera and even Elite i20), this new car is just called the Hyundai i20

A big expectation from the i20 is quality, given how it was a big selling point for the Elite. In the new car, the fit and finish quality is appreciable. It does feel well built and premium but there are more textures at play than in say, the Venue. What we would’ve liked to see is some soft touch plastics on the dashboard, a smoother finish for the door panels and some leatherette padding on the door armrests to uplift the experience.

Smaller Hyundais have engaged in a trend of outdoing their bigger, more expensive siblings on the features front. The Creta has features the Tucson doesn’t and the Venue introduced tech the Creta didn’t have. Additionally, premium hatchbacks haven’t upped the tech game as extensively as sub compact SUVs have, so there was a gap to be filled. And fill this gap the i20 does, with a package that includes goodies not even seen in the Verna.

When it comes to cabin space, the experience sees an improvement especially in the back seat. Hyundai says rear seat shoulder room and legroom have been increased and while the black interior may fool you into thinking otherwise, it actually works well as a 5-seater.

Is the space grand? Well, no, but three average-sized passengers can sit comfortably in the rear seat. The roof liner at the rear has been scooped out as well, so even someone over 6ft tall will have headroom to spare.

What you won’t get is the same sense of space as you would in say, a Honda Jazz because the view ahead doesn’t feel as airy. And that’s one of the only real hiccups in the new i20 - its front row headroom. This won’t be an issue for shorter users but for those around 6ft tall, headroom is lacking even with the seat height at its lowest point.  However, this is an observation made based on our experience in a sunroof-equipped variant so we’ll need to see if this is an issue in the lower grades as well.

It’s Going To Be Confusing

The BS6 era has proven to be an era of choice with Hyundai cars and the new i20 continues the trend. Take a look at the range of engines & transmissions.

One big change with this i20 is that the petrol engine can now go from a settling point to a selling point. Since the i20 name was introduced in India back in 2008, its petrol engine has always been underwhelming. The 1.2 litre petrol, which is still an option, has always been a great commuter but nothing more.

Given how the 1.0 litre turbo petrol has proven to be a strong performer, it’s a welcome addition to the i20. The Hyundai i20 is also the only diesel-powered option in the segment aside from the Tata Altroz.

Hyundai is also offering its wide range of transmission options, including two manuals, two automatic and one semi-automatic.

Of course, we’ll reserve our verdict for a proper drive review but the new i20 comes across as a very competent package. It gives existing Elite i20 owners enough reasons to want to upgrade and is a strong proposition for first time car buyers too. So any excitement for this car seems justified.