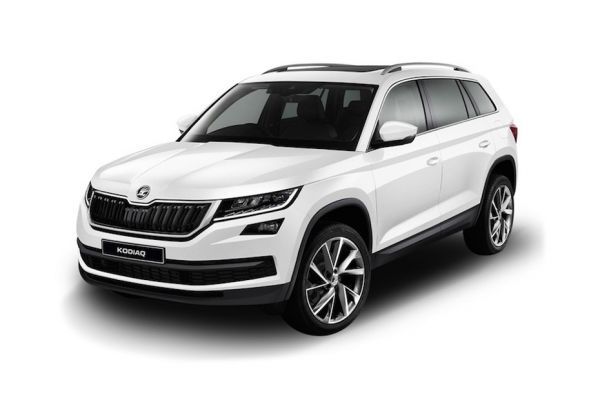 Priced at Rs 34.5 lakh (ex-showroom, Delhi) Skoda Kodiaq is a full-fledged 7-seater SUV available in the single Style variant in Indian market. The Kodiaq comes with the sophisticated car-like interiors married with a butch and rugged stance of an SUV. The nose of the Kodiaq is typically Skoda and thanks to the long wheelbase, the overall turn out commands the attention. Skoda has equipped Kodiaq with all the bells and whistles including nine airbags, cruise control, reverse parking system, sunroof, three-zone automatic climate control, 8.0-inch touchscreen infotainment system, 630-litre of boot space, and large 63-litre fuel tank. Under the Hood, Skoda Kodiaq is powered by 2.0-liter turbocharged diesel engine maximum power of 148 BHP, mated to 7-speed DSG automatic transmission sending power via all-wheel drive system. In Indian market, the Skoda Kodiaq is up against the likes of Volkswagen Tiguan, Hyundai Tucson, Toyota Fortuner, and Ford Endeavour among others.
Read More

Skoda will be introducing a petrol-powered version of the Kodiaq in the near future. The existing 2.0-litre diesel engine is most likely to be discontinued come April 2020. The petrol engine in question will be the 2.0-litre TSI. It is expected to be showcased at the upcoming Auto Expo 2020.

Skoda has given the Kodiaq SUV a rugged variant called the ‘Scout’ at a starting price of Rs 34 lakh (ex-showroom). The ‘Scout’ tag, which first made its way into India in the form of the Fabia Scout, is generally reserved for the carmaker’s more off-road focussed variant.

Enhancements in the Scout include an enhanced all-wheel drive system and full underbody protection. Itslots in between the Style and the L&K variants and is essentially an off-road ready package with all the creature comforts of the top-spec trim.The Kodiaq Scout’s price tag is a premium of Rs 1 lakh over the Style variant. Its rivals include the Ford Endeavour and Toyota Fortuner in the country.

Q. How does the Kodiaq compare with the Innova automatic, particularly the leg space and cabin space?
Q. Does it has 3 AC vents in last row seats - Kodiaq?
Q. What about the resale value of Skoda Kodiaq?
Q. Which one would be the best SUV in this price segment G4, Endeavour, Tiguan or Kodiaq?
Q. Is Skoda Kodiaq is 5 seater?
Q. Should I wait for the Skoda Karoq to be launched or is there any other best options under a budget of 30 lakhs?
View More Questions
Q. Which is better Skoda Kodiaq or Toyota Fortuner? View All Answers
Q. I am confused between two cars Skoda Kodiaq or BMW X1 or should I wait for Skoda Karoq. I am a civil contractor and My current car is Skoda Yeti and my daily traveling is approx 100 to 150 km on highways and village roads. In our areas both road conditions is not good and I have self drive my car and run alone. So Please suggest me which will be the best car for me. View All Answers
Q. Hello, I am stuck in between Kodiaq & Fortuner (2.8 4WD AT). I know I will be shelling out a couple of lacs more for Kodiaq. I need your expert advice to choose between the two of them. I already have a Brio for in-city driving and I have had the first generation Octavia for 6-7 years. The car I need now is for out of city travel with my family (two kids). Also, should I wait for the Honda CRV or is that a 'no comparison'?? Thanks for expert inputs.
Q. Toyota fortuner or Skoda Kodiaq which one to buy please suggest? View All Answers
Q. I am looking forward to buy a new SUV in the price range of 60-70 Lakh. The car will be used mostly on hilly areas(Uttrakhand). I need a car with huge service network. I have shortlisted range rover Evoque HSE and Skoda Kodiaq. I also liked the Volvo XC60 but there isn't many service stations please suggest me a car?
Q. How does the Kodiaq compare with the Innova automatic, particularly the leg space and cabin space?
View More Questions
All Kodiaq Questions and Answers

The Kodiaq is already an SUV that delivers a great balance of features, practicality and luxury. So what does the Scout bring to the table that the Style & L&K didn't already?

The Kodiaq RS has racked up quite a lot of feathers in its cap. It's the first Skoda SUV to wear the vRS badge and can clock 100kmph in 7 seconds. Is it as impressive in person as the numbers suggest?