Ask your question from RC 125 owners and experts
Your Question should contain at least 5 characters Submit Cancel
Available EMI Options
Rs. 4,683 per month @ 9.45% Apply for Loan

KTM has given a steep price revision for the RC 125. It now costs just as much as bikes twice its displacement and twice as powerful, like the Suzuki Gixxer 250. Head here for more details on the RC 125’s price revisions.

The KTM RC 125 BS6 makes the same amount of power and torque as before -- 14.5PS at 9,250 rpm and 12Nm at 8000 rpm -- despite meeting the stricter BS6 emission norms. Though there are no visible changes, the ECU maps have been revised and there have likely been changes to the exhaust system too. The 125cc DOHC liquid-cooled motor is mated to a 6-speed transmission. The RC125 is held together by a single-piece steel trellis frame suspended on a WP upside-down fork and preload-adjustable monoshock. Braking duties are handled by a 300mm/230mm disc brake combo along with single-channel ABS. These are the most sophisticated underpinnings on any 125cc bike in India.

The KTM RC design language was a bit polarising when first introduced in 2014, but it has grown on us, and the now-familiar appearance is the same on the RC 125 as well. The fascia is characterised by the twin-projector headlights. The RC looks like a pukka sportsbike, especially thanks to its steeply rising and sharp tail section.

The KTM RC 125 competes with the Yamaha R15 v3. Both are excellent beginner’s bikes for those looking to get into track riding.

If you’ve only recently turned 18 and are freshly licenced, you couldn’t have timed coming into this world better. Not that you could have had a say in it anyway, but never mind. I say this because the 18-year-old of today has such incredible options to pick from as their first bike. From the crop of 150s and even low-price 200s to a new breed of low-displacement, high-focus machines such as the KTM 125 Duke and, of course, the Yamaha R15 V3. Having tasted success (unexpectedly, by its own admission) in the 125cc segment, KTM now believes what the world really needs is a faired version of the 125 Duke which is - no prizes for guessing - the RC 125 you see here. 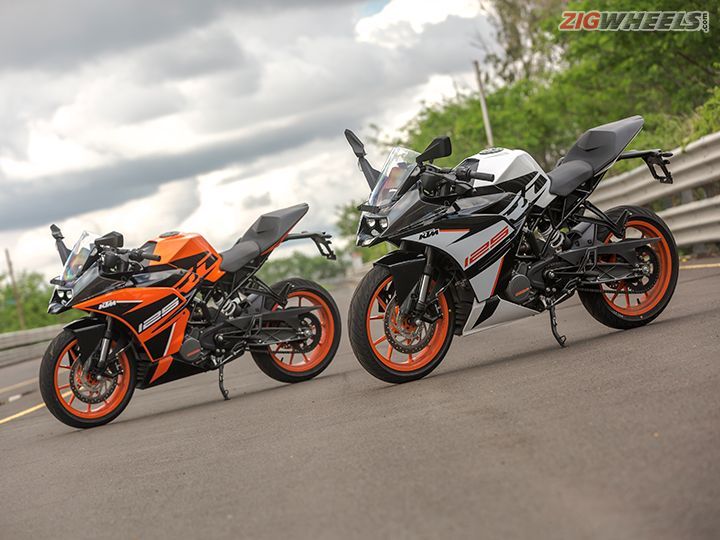 Nice of KTM to put an ear to the street but the catch is, it’s priced at a not-so-tempting Rs 1.47 lakh (ex-showroom Delhi). Just to arrange things for the benefit of perspective, the KTM 125 Duke, which happens to be exactly as powerful and 13kg lighter is Rs 17,000 cheaper and, speaking of faired bikes, the R15 V3, which offers 5PS more is still Rs 8,000 cheaper than the RC. When you consider that buying a motorcycle in this league involves endless rounds of arguments with your parents, foot stomping and threatening to skip meals (the last one usually does the trick), the RC 125 is on shaky ground with that sort of asking price. And then there’s the big question that overshadows even your ability to buy it - is the RC 125 truly a ‘Ready to Race’ motorcycle? 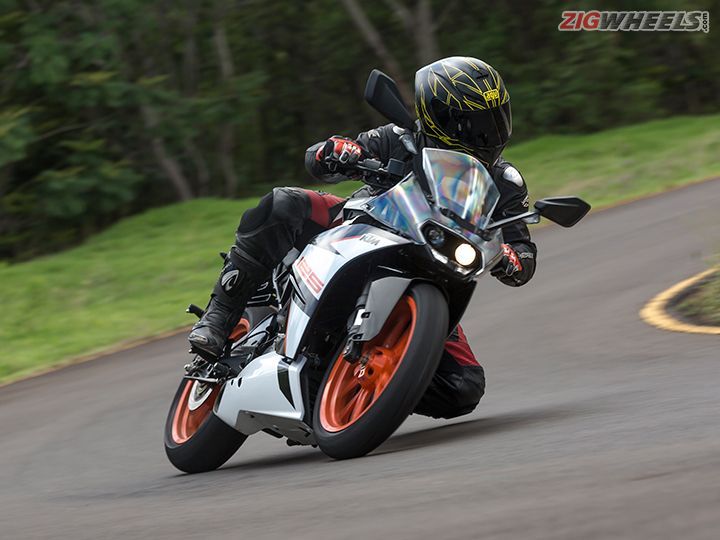 That’s a tall order for something powered by a 124.7cc, 14.5PS single-cylinder motor. Sure, it’s fuel-injected and liquid-cooled and has four valves at its disposal, but with a 154kg dry weight, these numbers have a steep incline to ascend. Viewed against this backdrop, the 12Nm of peak torque that kicks in at 8000rpm or even the 6-speed transmission seems inadequate to really help the RC 125 shine. What was KTM thinking, then? Tell you what. In the last six months alone, KTM India sold nearly as many 125 Dukes as it did all of its other motorcycles put together. That’s 14,000 125s by the way, and it’s no surprise KTM is tempted to play another 125cc card. 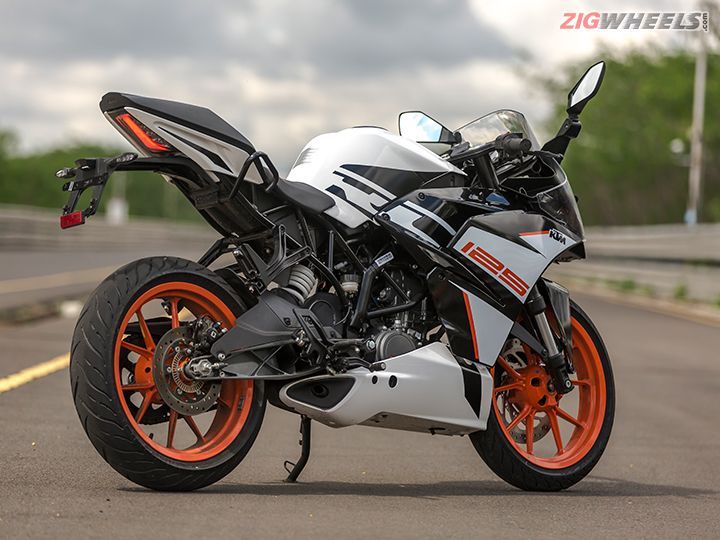 The formula is exactly as in the other Duke/RC pairings; the powertrain is identical and the mechanicals are exactly as on the respective bigger machines. This means that the RC 125 gets the same level of equipment (very high, that is) which includes the 43mm upside-down fork, a 10-step adjustable monoshock, that energetic trellis frame (painted orange, of course), alloys in the same hue, a 300mm disc up front, a 220mm disc at the rear (with a single-channel ABS) and, like on all other KTMs except the 390s, a 110/70 R17 front tyre and a 150/60 R17 rear tyre courtesy of MRF. That’s some serious bit of kit you get for your (equally serious) money, which definitely tightens the RC 125’s case. 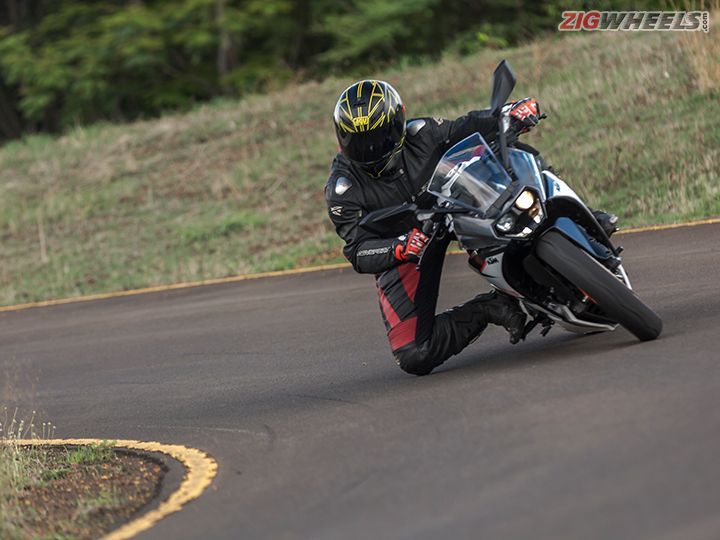 It’s how this equipment-rich package translates to the riding experience that really underlines the significance of having a strong foundation. You see, the RC 125 has the determination of a man with a point to prove every single time it goes around a corner. Here, the aggressive riding stance becomes a precision instrument in helping you focus on your lines. All of its components, and the greater whole of their sum, come together to provide you with a cornering package that’s very fulfilling. Turn-in isn’t as razor sharp as on the R15 - the RC definitely feels like a motorcycle designed for larger-displacement motors - but what it lacks in terms of the Yamaha’s enthusiastic agility, it makes up for by being poised and confidence inspiring. If only I’d had a machine like this to hone my riding skills on when I was 18!

Around the Bajaj/KTM test track at Chakan on the outskirts of Pune, the RC 125 flows from corner to corner with a degree of maturity that’s definitely a first for a 125 and not even under the most aggressive of inputs does it do anything untoward. That will be music to your parents ears, at the very least. The single-channel ABS also secures the hard-riding experience further, although the lack of rear ABS still lets you have a little bit of fun - we didn’t tell you that, okay? 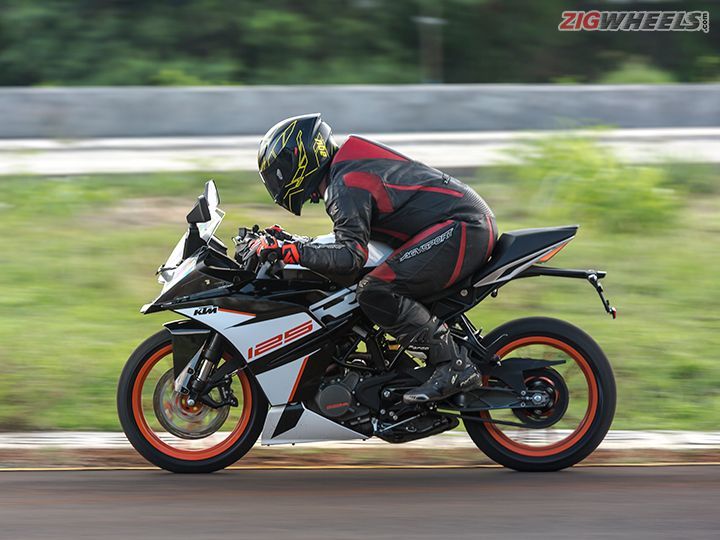 It’s what happens when the road straightens out that demands easing off superlative terms. With the sort of output figures the RC 125 boasts, that it isn’t a splendid performer shouldn’t come as news, but the RC suffers more than the Duke in this regard. Foreseeing what its performance will translate to in the real world (full of interruptions and traffic bottlenecks unlike on this flowing test track), the RC is underwhelming in terms of acceleration. While it retains the crispness and energy of the bigger KTMs, in terms of outright punch, the RC 125 is like a censored version of an RC 200. I suppose KTM would do well to sell it with a PG18 sticker, because your parents will definitely love the sound of a motorcycle that struggles to get past 120kmph on most generous straights.

It’s not a complete slouch either - with the right gears and revs, you can get it up to 90 kmph or so without effort - but it certainly isn’t a bike you’re going to enjoy out on the highway. An R15 V3 is a much better bet in that setting. However, the flip side is the fuel-efficiency you can expect from it. With the 125 Duke returning 47kmpl (city) and 48 kmpl (highway), it wouldn’t be far-fetched to expect similar numbers from the RC 125, give or take a minor difference owing to its heavier weight but also its more efficient aerodynamics. This means you can save most of your pocket money for things other than petrol - we didn’t tell you that either, okay? 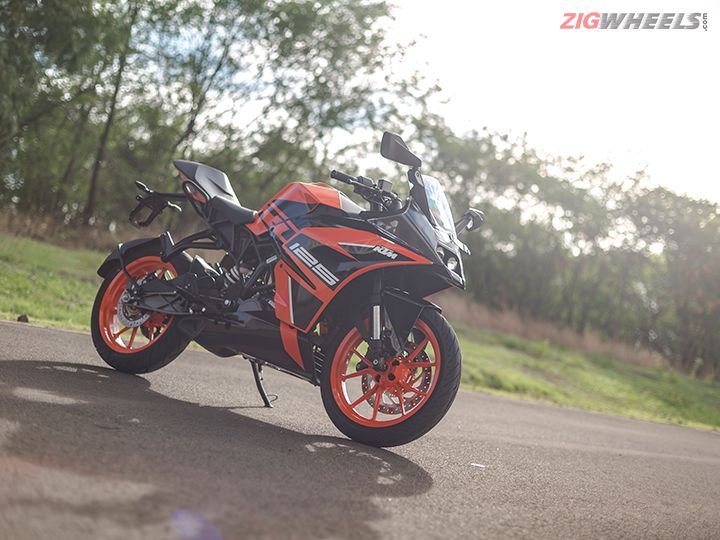 So, back to the big question. Does the RC 125 live up to its ‘Ready to Race’ tagline? It does, as long as you can live with the lack of outright, bone-chilling speed. At Rs 1.47 lakh, it is certainly overpriced. An R15, or even the crop of 200s such as the TVS Apache RTR 200 4V or the Bajaj Pulsar NS200, are far more rewarding from an engine-performance perspective. However, if evolving into a clinically precise rider is something you aspire to be, and if you really badly want a KTM but know fully well that a 200 or a 390 is simply beyond your reach, one way or another, then the RC 125 is undoubtedly a prayer answered. Timed it just right, you!

What are the colours available in KTM RC 125?