The new Yamaha Fascino is the most premium scooter from the Japanese motorcycle company. Here's a detailed look at the new 113cc scooter from Yamaha India 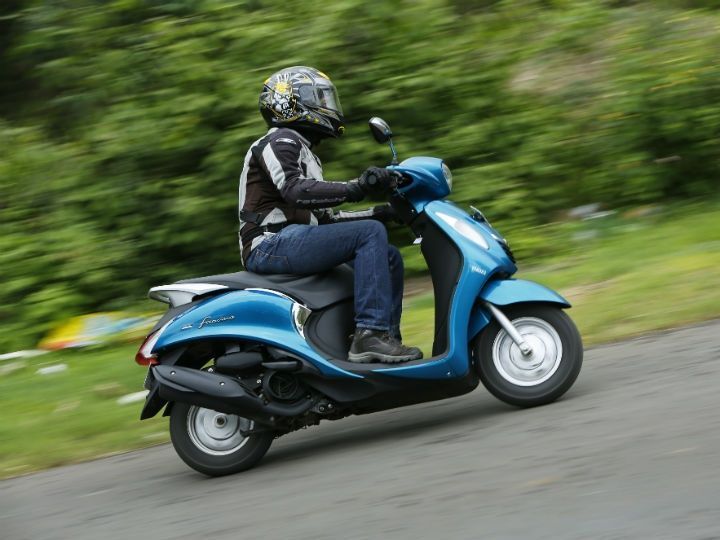 As scooters gain larger market share with every passing day, they have begun to play a vital role for most two-wheeler manufacturers product planning and line-up. And that's the reason, for the last couple of years Yamaha has been focusing mainly on their scooter models. The bike maker positioned the Yamaha Ray as a scooter for girls, Ray-Z was targeted for young men and the Yamaha Alpha for the family man.

Now the only thing missing was the slightly more stylish model which could lure scooter buyers with more disposable income, looking for unique design and top class quality. Hence, in came the Yamaha Fascino.

This is a niche segment and the limited competition includes the attractive Italian styled Vespa scooter range and to a certain extent the Honda Activa 125. Keeping that in mind, the Yamaha Fascino has been given a retro design treatment with smooth flowing line, chrome highlights and the usual quality that Yamaha products are associated with.

It's quite an elegant looking scooter with an attractive front design. It gets a distinct chrome front grille and old school rear view mirrors also in chrome. But, what makes the Yamaha Fascino stand apart is its unique triangular headlight.

Once on the seat, the retro analogue instrument console grabs your attention, which has the usual speedometer and fuel gauge. The switch gear feel and finish is of good quality, but isn't exceptional as expected on a premium scooter.

In profile, the sharp tear shaped tailpiece along with the sleek and long exhaust reminds of the Batmobile which is one of the most attractive aspects of the scooter.

At the back, there is a mix of matte black plastic and glass bits on the backlight and indicators and in between sits the chrome highlight with a small Yamaha tuning fork 3D logo. However, in comparison the matte black bits at the back don't live up to the overall drama created by the rest of the scooter. And then there’s a nice and effective rear tyre hugger, which helps prevent water splashes.

The new Yamaha scooter offers pretty much everything that its competitors do, but nothing out of the ordinary. So, there's a small cubbyhole near the key fob which can be used to store mobile phones or things like a small water bottle.

The soft and large seat is 7mm thinner around the edges to help the rider's feet reach the ground with ease. Also, there's a slight step on the seat to give the rider a snug fit. Pillion has enough room, propped foldable foot rest and useable grabrails.

The 21-litre under seat storage is one of the largest in the segment, but unlike Yamaha's claim a proper full face helmet does not fit in. Also, the 5.2-litre fuel tank is on par with the competition.

At 103kg, the new Yamaha Fascino is the lightest of all the Yamaha scooters, and in the segment. Yamaha has also carved out a fairly large 380mm wide and 220mm long footboard, which makes for decent leg room.

In terms of cycle parts, the Yamaha Fascino, like its siblings, is based on the same platform with telescopic front forks and single rear shock absorber mounted on the left.

It's a fairly long scooter with a wheelbase of 1,270mm, but the 128mm ground clearance definitely isn't the best in the segment. Currently, the Yamaha Fascino runs on basic 10-inch wheels with MRF Zapper tyres, but for such a stylish scooter we expected it to feature larger 12-inch wheels and alloy and disc brake should have been offered, at least as an option. Also missing is a brake lock, which is useful to while parking on a slope and maybe a digital clock in the instrument cluster.

Yamaha has employed the tried and tested 113cc air-cooled, 4 stroke, single-cylinder Blue Core engine as seen on the other Yamaha scooters available in India. This engine develops a reasonable 7.1PS of maximum power and 8.1Nm of peak torque.

The Fascino has one of the most refined engines in the scooter segment of India, though it's also one of the least powerful. On flat and straight roads, it's not the quickest to reach 40kmph, but gallops fast enough to 60kmph thanks to strong mid-range. From there on, the sprint to 80kmph is pretty impressive and we could manage a top speed of 90kmph on the speedo with the engine visibly strained.

The reason for this laid back low-end power delivery seems to be the fact that the Yamaha Fascino is being marketed as the most fuel efficient scooter in the segment, claiming an astronomical 66kmpl!

Apart from the light weight, Yamaha uses a range of fuel saving techniques such as a high-ignitability nickel spark plug, and its Blue Core technology which reduces engine friction.

Not the most powerful, but pretty frugal. So, you win some... and some you don't.

Yamaha Fascino comes with several plastic-resin parts which along with other weight reducing design measures has helped the scooter become light and agile. This is specially highlighted while riding within the city.

It's long wheelbase and weight makes it nimble and easy to use. The telescopic front forks and rear shock absorber are tuned on the firmer side, but it's not bouncy like the Yamaha Alpha. The MRF Zapper tyres hold on to the tarmac firmly and along with the well engineered balance, it's easy to carry higher speeds through a corner.

The telescopic suspension can also take way more beating and bad roads without unsettling the Fascino, as compared to usual link-arm setup seen on scooters like the Activa. The only disappointment in this department are the drum brakes which do not offer enough bite and on a long ride could start to fade away. A scooter of this stature needs a disc brake in front.

The Yamaha Fascino comes in a range of attractive colours including the blue you see here. This with the retro meets modern design approach making it an interesting proposition for those looking for something unique in the segment. Unlike the Vespa which also offers similar styling, the Yamaha Fascino is priced quite attractively around Rs 62,000 on road Pune - making it a lot more affordable, efficient and dependable proposition.