We get our hands on the brand new Volvo S90 sedan in Spain. Here is what we think about it.... 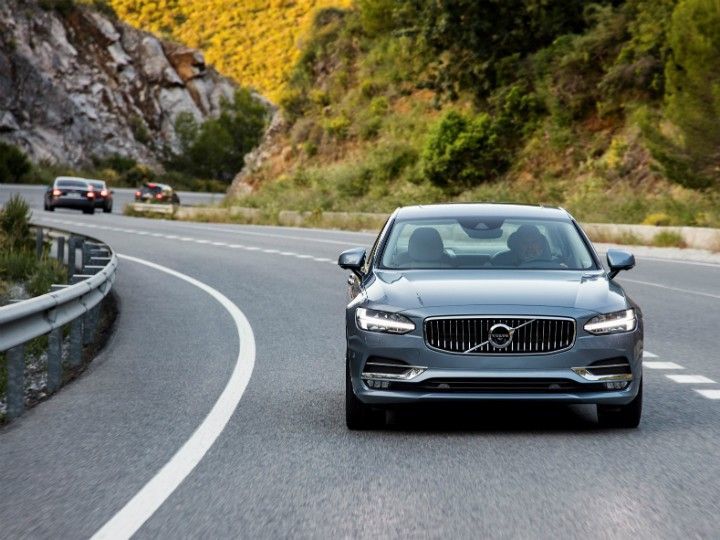 “How was your flight? Slept well?” asked Sudeep, Corp com head for Volvo India as we landed at the Malaga airport. “I barely slept a wink. Just couldn’t sleep from the excitement” I said and he understood and told me that we would be going out for the drive of the new Volvo S90 within an hour of reaching our hotel. This did get me a bit worried. Though, most of our way here I felt like an easily excitable little girl who had discovered candyland exists and she was going there. But as we neared the hotel, my excitement was giving way for a bit of dread for not having had enough rest. As we pulled into the porch of our hotel, there it was, gleaming in the Spanish afternoon sun, bathed in sunlight looking absolutely beautiful. Gone was my fatigue and the excitable little girl was back.

While everyone went on to get changed quickly I hung back to admire the car a little more. The design and proportions of the car are nothing short of majestic. It is designed on the company's SPA or the scalable platform architecture which also underpins the XC90. The Thor’s hammer LED DRLs sit on either side of the concave waterfall grille inspired from the P1800 of the seventies with the company's iron mark sitting right in the middle of the grille. The design isn't radical or aggressive but confident and tasteful.  The shoulder line runs the length of the car ending at the tail lamps.  The tail of the car features an edgy design with twin stepped wraparound tail lamps lifted again directly from the Concept coupe. The design of the S90 is simple and clean yet futuristic. To put it simply it looks like nothing else on the road, not by a long shot. Compared to the S80 it is set to replace, it features a shorter overhang by 150mm in the front and a slightly higher roofline.  The car sits low to the ground on 20-inch wheels shod with Pirelli PZero tyres. But the 20-inch wheels coming to India is a bit doubtful we will probably have to make do with 18-inch ones.

By the time I was done admiring the proportions of the car, I was told to hurry up and get ready as we were just about to leave for the drive. There was no moment to lose and I’m pretty sure a couple of records for time taken to get ready were broken for I was the first one down, ready and raring to go. But first I wanted to see what the S90 had to offer on the inside and what we saw was well, in a word, brilliant.

The Volvo probably has the best interior ever designed for a sedan. The simplicity of design and attention to detail has been carried over from the exterior to the cabin as well. Yes, it shares a lot with the cabin of the XC90 but has its own character. The dash looks like it’s made from a single piece and an aluminium accented line runs the length of the dash. There are ample wood inserts in the cabin that give an already exquisite cabin a richer feel. Even the stitching on the upholstery is of the highest quality and immediately grabs attention. The front seats are the same slim seats as on the XC90 and so is the 9-inch touchscreen infotainment system which can even be used with the gloves on. Then there is the technology and not just cutting edge safety tech but comfort features as well.

The S90 comes with the same slim seats that grace the cabin of the XC90 and are fully adjustable. There is a small lever attached to the lumbar support knob that lets you access the seat settings on the infotainment system. It allows you to set the wing support, squab length and lumbar according to your preferences. The driver’s perch itself is extremely comfortable with great visibility all round. The flat bonnet up front doesn’t interfere with the vision despite you sitting quite low in the car. After you’re done fiddling with your seat you can get on with the HUD or the heads up display which also comes with a number of settings and you can choose what you would prefer it to display for you. In our case I went for map directions and of course speed.

When you start the car, it stirs from its slumber in the most dignified way possible. Standing outside it is easy to determine that the engine is a diesel unit albeit an extremely refined one but inside the cabin you’ll be hard pressed to hear the engine tick over. The gear lever though could’ve been made slightly more effortless to operate but it is still not cumbersome. Pulling away from a standstill is too a breeze and is done almost with confidence. Volvo has fitted its 2.0-litre D5 engine with the PowerPulse technology to help negate turbo-lag. It basically employs a small cylinder of compressed air which sends fresh air into the turbo in a bid to make it spool up much faster despite the low amount of exhaust gas pressure. So has it worked? In a word, yes and quite brilliantly. There is practically no turbo-lag and as soon as you prod the throttle even with your little toe, the response is almost instantaneous. The S90 has one of the most linear power curves in any luxury car.

It isn’t what you’d call aggressive despite having a healthy dollop of 235PS of peak power and it lives up to its tag of relaxed confidence quite well. There’s no sudden surge of power that pushes your head against the headrest rather a linear, never ending flow of power which helps the car accelerate quickly yet gradually. The 8-speed gearbox too has a relaxed nature and even in dynamic mode the shifts are far from aggressive. When you turn off the highway you can take the car out of the ultra-soft comfort mode and push it into dynamic as you approach a smooth and winding ribbon of tarmac like we did on the back roads of Malaga. Now, when you turn on the dynamic mode there is a noticeable difference in its nature. The steering weighs up, the throttle response is sharper and the suspension stiffens up as well but don’t expect the car to turn into a corner carver for even in dynamic mode, the ride is nothing short of sublime and the focus is clearly on comfort rather than spirited driving unlike the BMW 5-series and the Jaguar XF. And the lack of paddle shifters are evidence enough. The S90 is clearly built for people who prefer to be chauffer driven and prefer driving themselves only on Sundays for fun.

The IntelliSafe system too works rather well as it now uses radar guided technology and the pilot assist system works constantly and uses corrective steering inputs to keep the car veering from the lane. It isn’t the most refined system as it tries to correct itself which can be a bit unnerving. The adaptive cruise control and the city safety feature are a great help when the situation gets hairy and it also comes with large animal detection as well. In addition, Volvo plans to equip the cars it sells in India with its IntelliSafe system as standard.

The Volvo S90 is a car with a very clear focus and spirited driving isn’t one of them. It stands for elegance and comfort and stands strong and true to its claim. It offers every creature comfort one can imagine and most of the ones mentioned above are standard fitments except the 20-inch wheels which will be optional extras, the Indian car will come with 18inch wheels as standard. Everything else like the ventilated seats, Bowers and Wilkins 19 speaker sound system, IntellISafe system with pilot assist and the fully adjustable front seats with massage function are all part of the standard equipment which means all the costs are covered in the pricing itself which is expected to be around Rs 55 to Rs 60lakh. That makes it a phenomenal value for money package. And when launched in India late this year it will compete with the likes of the BMW 5-series,  the Mercedes-Benz E-Class, Jaguar XF and the Audi A6.  Yes, it’s not a tarmac scorcher but then it isn’t built to be and neither does it try to be. What it is, is an extremely comfortable city car that one would love to be driven in and will equally enjoy it on the open roads because contrary to popular belief a good driving experience doesn’t necessarily mean hitting the apex on every corner.