The latest refresh to the Wego sees an addition of a front disc brake, added features and new colours? But do they still make it relevant today? 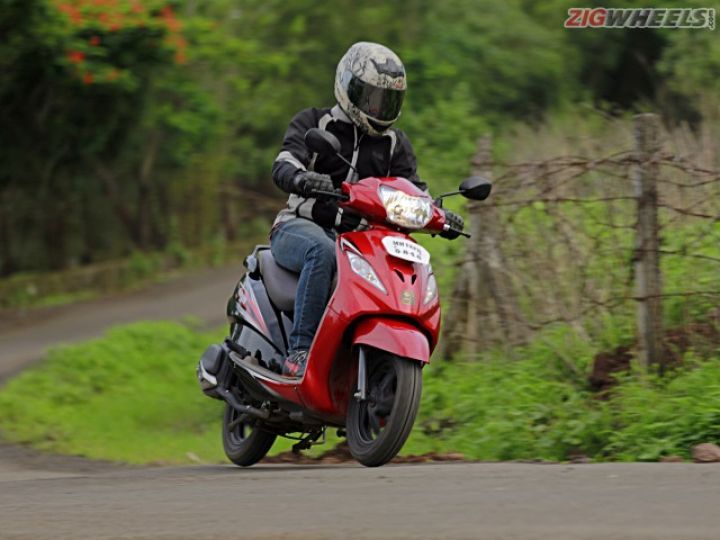 When launched in 2010, the Wego came with the mechanicals of a larger 110cc scooter in a compact package that made it accessible to both sexes. It’s been seven long years now and the Wego has been getting minor updates along the way to keep it fresh and relevant. The latest update includes new color schemes, added features and SYNC braking in drum brake-equipped versions. Seven years is a long time, so the question is, should you consider the Wego in today's times where the competition has evolved and become more competitive? We find out.

Design and features:
The Wego had a sharp angular design which has remained unchanged over the years. It does, however, get new vibrant colours, which seem to alleviate monotony and manage to make the Wego look younger. The two new colours are metallic orange and metallic grey. The bike also gets beige body panels unlike black, on the earlier one for a touch of premiumness. The seat gets a two-tone cover as well. Personally, I liked the black body panels as they added a hint of sportiness to the design. The five-spoke alloys look sporty and complement the lines of the bike. While the Jupiter plays it safe in terms of design, the Wego is flashy enough to attract a younger audience.

The scooter already came with a host of features like a fully-digital instrument console, a dual-tone paint scheme, telescopic front forks, tubeless tyres, external fuel filler cap, pass light switch, reserve fuel warning light and illuminated ignition lock among others. The underseat storage is good enough to hold a half face helmet. It is hard to read the fully-digital instrument console on the move and a numeric speedometer would have served the purpose better than the bar display currently on the scooter. The 2017 update also gets it an under seat USB phone charger and the mandatory auto headlamp on (AHO) feature. The feature list does make for a good reason to plonk in for the Wego.

Engine and Performance:
The TVS Wego is powered by the same 109.7cc air-cooled single that also does duty on the Jupiter and the Scooty Zest 110. The motor delivers 8PS of power at 7500rpm and 8.4Nm of torque at 5500rpm. Though all the three scooters have the same engine, different weights and wheel sizes make them perform differently.

The Wego’s motor has a strong and linear pull from idle and does not feel stressed when pushed to perform. It pulls strongly till 60kmph after which it mellows down and takes a bit of time to reach its 81.22kmph top speed. Under acceleration tests, the Wego did the 0-60kmph run in 8.81 seconds, which is good for a 110cc scooter.

Ride and handling:
The Wego was among the first scooters from TVS to come with symmetrical body weight distribution. What this means is that the weight was equally distributed on the left and right portions of the scooter. This balance makes manoeuvring the scooter in tight spaces in low speeds, a breeze. The scooter gets front forks and a single rear hydraulic damper. Though the ride is on the stiffer side, the suspension soaks up most road imperfections without transmitting them to the rider. The suspension only gets caught out by big craters. The ride isn't as plush as the Jupiter but that's the only price you pay for better dynamics.

Handling is quite good and the Wego feels effortless and surefooted around corners. The scooter is extremely stable at speeds above 60kmph. Grip from the 90/90 R12 front and the rear tubeless tyres is also quite good. In terms of dynamics, the Wego is more agile and surefooted than the Jupiter.

The upright riding position earns the scooter more brownie points. The dual-tone seat’s cushioning is a bit on the softer side, but not to the point of being uncomfortable while riding in the city. The drum brake-equipped Wego now comes with Sync braking, where when the rear brake is applied, brake pressure is distributed across both wheels, similar to Honda’s combi-braking system. What we have here, though, is the disc brake-equipped version.

This one gets a 220mm disc brake upfront and a 130mm rear disc brake. These impart a strong and progressive bite that gives the rider more confidence. Our braking tests saw the disc brake-equipped Wego do the 60-0kmph test in 2.78 seconds covering a distance of 22.56 metres. This is an excellent time for a scooter.

Verdict:
The Wego is priced at Rs 50,165 for the standard variant (with SYNC braking) and Rs 53,083 for the Disc edition (ex-showroom, Delhi). Its competition, the Honda Dio, Suzuki Let's and the Yamaha Ray Z retail for Rs 49,239, Rs 48,193 and Rs 55,898 respectively. The Dio undercuts the Wego in pricing but misses out on telescopic forks, alloy wheels, and combi braking/ optional disc brake. The Let’s, though, gets telescopic forks. The Ray ZR gets disc brakes, alloys and telescopic forks but is Rs 1,800 more expensive.

Among the competition, the TVS Wego still offers the most number of features and better value for money. In terms of design, the Wego still looks better than most of the competition and refinement, ride and handling is of top order. Despite having been in the market for seven years, the Wego does make sense as it still remains a balanced all-round package.