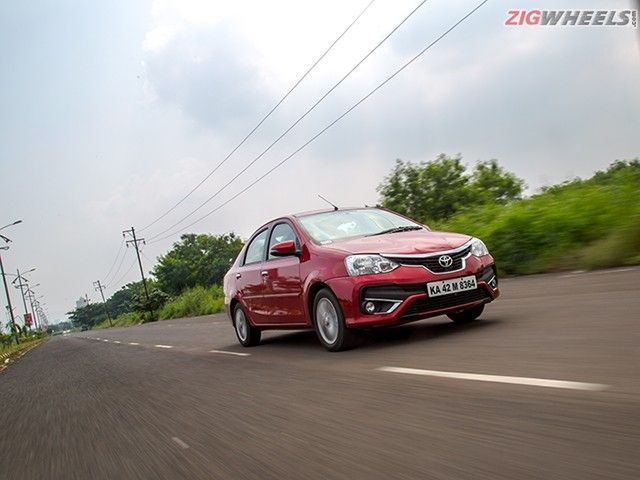 We've all been in an Etios at some point or the other. Its popularity in the cabbie market is overwhelming, to the point that one driver claimed that it was the Innova among sedans. That is definitely high praise because its MPV sibling is considered to be the epitome of reliability and no-nonsense motoring (or should I say commuting?) in the country.

Our test car wore a nice shade of maroon, which I think brings out the changes really well. Of course, it is available in the standard subdued shades that include multiple silvers and greys, but in case you want your Etios to have a bit of flair, this shade is the way to go. Updates include a new bumper and grille that try to give the Etios a hint of sportiness. I like how Toyota hasn't gone overboard with chrome appliques, and the use of carbon-fibre texture on the front bumper looks really cool. The rear bumper is new too, and so is the thick slab of chrome that ties the tail lamps together. Updates are minimal, but the big news is that the Platinum is reserved for private buyers only; so you won't see one with a yellow plate anytime soon.

But then, it is easy to see why it is so popular with the yellow-plate masses. The insides feel like they will survive the apocalypse and is a proper, proper five-seater. Legroom is easily among the best for cars available under Rs 10 lakhs, second to only the Nissan Sunny/Renault Scala. In case you aren't ferrying the fifth passenger around, there's a new fat central armrest too. The new black-ivory colour theme does a good job of driving home the sense of space. The windows are extra large and the beige upholstery makes the cabin look bigger than it actually is. Other new goodies include the updated instrument cluster, and electrically foldable mirrors.

While the fit and finish are commendable, we do wish Toyota had upped the quality a notch. The scratchy plastic, especially in the lower half of the dash, seems out of place on a near 10 lakh rupee sedan. Also, features such as automatic climate control, rear AC vents and a multi-information display are missing on the top-spec variant. Not done!

The Etios isn't a low-slung sedan and ingress-egress is a strong point. It doesn't take long to settle into a comfortable driving position either, courtesy the height-adjust for the seat and the rake-adjust on the steering wheel. The steering is slightly heavy, but not will-hurt-the-forearm-in-traffic kind. I personally prefer a weighted wheel, so I had no issues adapting to this one. In typical Toyota fashion, the clutch is light but the travel is long. Moreover, there's no automatic option to choose from; so your left leg will be subjected to a little workout in traffic.

What's particularly impressive about the Platinum Etios is the improvement in NVH levels. The thick insulation under the bonnet keeps the noise at bay, but the vibrations do tend to seep in a little through the clutch pedal and the gear lever. The motor is as tractable as ever, and has a tremendous amount of shove low down the rev range. I like how it behaves practically like an automatic in second gear, letting you take off from a standstill to highway speeds effortlessly. Output remains unchanged at 68PS and 170Nm, which seems just about adequate for the saloon.

It is happy chugging along at triple-digit speeds all day long too, and the ride is flat enough to let you do it as well. Toyota claims to have worked on the shock absorbers, but the ride didn't feel too different compared to the old one. It can be called comfortable, nonetheless. It is evidently tuned to be softer, so you can expect a little lean into corners.

Having clocked close to 300kms (in a shade less than a quarter tank, no less), I have no doubts about the Etios being a comfortable family road-tripper. Quick maths will give you a figure that's well over the claimed 23.59kmpl – it definitely knows how to keep the wallet happy. The accommodating 592-litre boot is the largest in its class and will swallow in a family's weekend luggage with ease. In case you aren't travelling full house but  have a lot of stuff to haul, the rear seats fold down now, giving you more room.

While the updates do make the Etios a more compelling package, the biggest talking point this time round is safety. Dual airbags and anti-lock brakes are now standard across the Etios range, which is a welcome move. It also gets ISOFIX mounts on the rear bench for the child seat. Toyota has gone a step ahead and reinforced the chassis; so it will fare better in a crash too. Geeks will be quick to point out that the Etios twins scored a four-star rating in a crash test conducted by the Global NCAP.

Yes, there's a lot missing on the feature list when you compare it to, say, an equivalently priced compact sedan. But, in exchange, you get a full-sized saloon that can accommodate five and their luggage, an efficient motor, and the backing of Toyota's fabled reliability.

Prices for the diesel Etios start at Rs 7.56 lakh, which places it squarely in the Sunny-Scala territory. And that price point makes it among the most affordable cars for folks who prefer being chauffeur driven. Also, that explains why the steward at a swanky five-star hotel lunged to open the rear left door, only to find I was all alone in the car. Or does it?