Mercedes-Benz has just launched its first station wagon/estate in India - the new E-Class All-Terrain. Does it bring enough to the table to stay afloat? 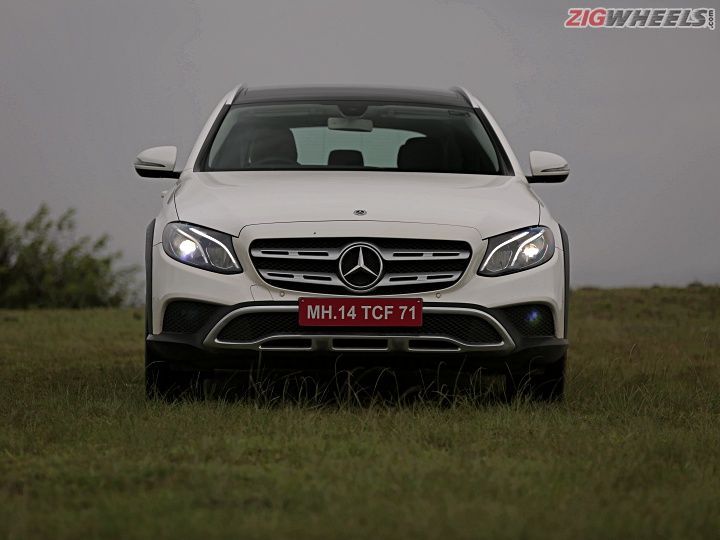 Let’s first lay some facts on the table - station wagons or estates have famously failed to capture the imagination of cars buyers in India. For a country obsessed with bang for your buck and space for large families, this aversion for station wagons seems counterintuitive and has stumped both pundits and the few automakers who dared to try and sell them in India. A lot of theories seem to point at the assumption that a sedan is both aspirational and classy while a station wagon is more utilitarian.

Mercedes-Benz was one of the first luxury marques to set up shop in India with the E-Class. So it will be quite interesting to see how the forerunner of ‘class’ in the subcontinent manages to portray the latest addition to the E-Class family. Can the Mercedes-Benz E-Class All-Terrain buck the trend by not calling it a station wagon, estate, combi or weekender, etc.?

What is it?
In a nutshell, the All-Terrain is an E-Class estate equipped with the GLE’s 4MATIC all-wheel drive system. This give the estate a much wider range of operation or, if you’re adventurous, a bigger playground. The All-Terrain also features the new OW 654 series 2.0-litre, 4-cylinder, BSVI-compliant diesel engine and 9G-Tronic automatic transmission.

Styling is practically the same as the sedan except for the roof that stretches all the way to the rear in a clean curve, terminating in a hatch. It also gets black plastic cladding that runs along the wheel arches and the rear bumper to protect the bodywork from scuffs and dents when it’s taken off the beaten path. In the flesh, the All-Terrain looks longer than it actually is and dimensionally, it’s actually just 10mm longer than the long wheelbase E-Class sedan that’s sold here. However, it gets a 140mm shorter wheelbase when compared to the sedan, while the height and width too are just a couple of millimeters off. This means you’re effectively left with the same footprint as the E 220 d and the E 350 d sedans, even though it doesn’t feel so.

However, the estate body shape allows for an enormous 670-litre boot, which can be expanded to 1820 litres by folding the second row of seats. That’s enough for a six-footer to comfortably lie down on the completely flat surface with his legs fully stretched out. Believe us we tried! There are a plenty of cleverly thought out options for configuring the boot and managing luggage, letting you pack everything including the kitchen sink. This makes the All-Terrain a perfect weekend car, one that will hold a whole road trip worth of luggage as well as have the ability to continue travelling even after the tarmac ends.

Still luxury?
Go anywhere ability and tons of space are not exactly the headlines you’d think of when you think of the E-Class is it? Convention dictates that an E-Class should exude luxury and it does have some key features in place - cushy (faux) leather everywhere, ambient interior lighting, dual-zone climate control, heated front seats, Nappa leather-wrapped steering wheel with touch controls, large 12.3-inch touchscreen, an AMG Sports pedal cluster and All-Terrain badging on the floor mats.

The E-Class sedan sold in India is the long wheelbase variant, so the passenger seats are much better specced with 37 degrees of incline, a memory function and a comfort headrest - features that are missing in the All-Terrain. You will also miss passive keyless entry and the sweet-sounding Burmester sound system that’s available in the less expensive E 350 d.

For a car that sits at the very top of the E-Class lineup in India, needing to unlock the car with the key fob and the unbranded Harman Kardon speakers that only look like the Burmester ones may be hard pills to swallow for some. But who needs city slicker comforts when you can go where no other E-Class can, right?

The All-Terrain rides quite comfortably even if it’s not as soft and cushiony as the E-Class sedan. City speeds in Comfort mode keeps everything flat and quiet in the cabin. However, it does get a little bumpy as speeds increase. With the increase in stiffness, the handling has also improved a tad and the All-Terrain never feels floaty, one of our biggest complaints with the sedan.

All-wheel drive huh. So, what can it do?
The core of this All-terrain is the 4MATIC all-wheel drive system from the GLE which has been paired to the E 220 d’s 194PS 2.0-litre diesel motor It’s also equipped with Mercedes-Benz’s active air suspension but with a stiffer setting which is exclusive to the All-Terrain. The stiffer setup allows the All-Terrain to clear everything that the E-Class would scrape on and the larger 19-inch rims add 14mm more ground clearance over the 17-inch units that the sedan ride on. Additionally, when you shift into off-road mode, the All-Terrain-specific air suspension raises the car up by 20mm (laden ground clearance is 156mm) and it will stay this way for speeds up to 35kmph. This meant we didn’t have to pussyfoot it over speed bumps and even the infernal sharp-edged table top ‘car destroyers’ that Pune is famous for.

Splashing around in the mud in a Mercedes-Benz, now that’s the kind of taboo car porn that I could really get into. There’s really no need to get a Mercedes-Benz all mucked up like we did on our test. But the best part of all this silliness was that it didn't bother the All-Terrain one bit. We waded through one particular trail that was more of a river of slush than it was a road. And even though I was on edge the whole time, wondering if we’d get stuck or bottom out, the All-Terrain managed it without batting an eyelid.

As far as performance is concerned, the All-Terrain is just a tad slower than the E 220 d. With a 0-100kmph time of 8.84s, it’s just 0.82s slower than rear-wheel drive sedan. The quarter mile times are similarly slower. Sadly, the heavens opened up for the second part of our test, which meant we couldn’t collect comparative braking figures. However, we expect similar differences in braking performance as well.

Should you buy one?
That’s a tough one to answer. Priced at Rs 75 lakh, the All-Terrain sits above all but the coupe version in the Mercedes-Benz E-Class range, including the more powerful E 350 d. At that ex-showroom price, it’s over Rs 15.36 lakh dearer than the E 220 d that it shares an engine with. So effectively, that’s the price that you’re paying for the all-wheel drive system and the extra convenience of the estate body shape. You’re also going to be left with a shorter features and creature comforts list than the sedan. The bigger problem, however, is the fact that you can have a V90 Cross Country that offers a similar set of abilities and a bucket load more features for Rs 10 lakh less!

This makes recommending the E-Class All-Terrain quite hard, especially when you’re looking at picking something from the E-Class range. But then again it’s abilities are not quite conventional either. However, if you’re not quite the conventional character and like cars that can take things rough but are soft on the inside, then the All-Terrain could be worth a look.