Properly green and even more luxurious - that’s the promise the spanking new straight-six diesel engine in Mercedes-Benz’s refreshed-for-2018 S-Class makes. We find out how it delivers. 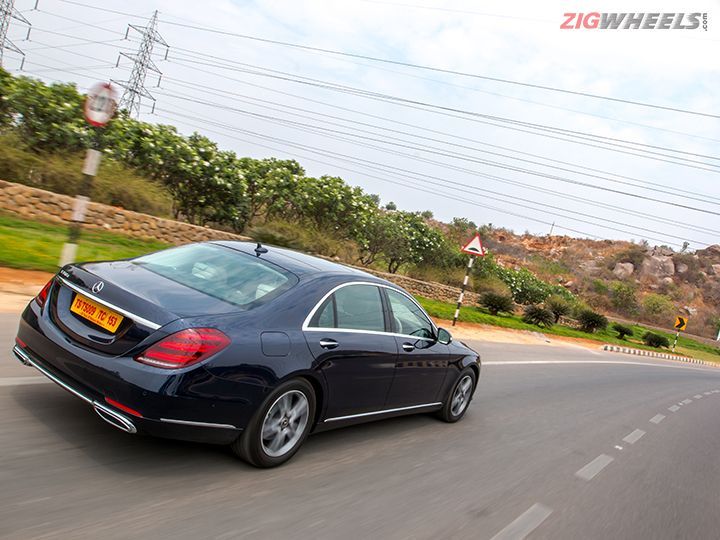 The two exhaust vents on the rear bumper of the Mercedes-Benz S-Class S350d are fake. I say this with certainty because I went sniffing for diesel fumes and looking for sooty exhaust. A closer inspection revealed that the single exhaust was tucked away on the left, behind the bumper. There were no tell-tale signs to have spotted it without having poked my head underneath. The S350d is a big statement from Mercedes as it packs the first diesel engine in India capable of meeting BSVI emission norms while being compatible with BSIV fuel.

With the image of diesel taking a pummeling, the car touted as the best car in the world has decided to throw in its weight and clean things up. For this Mercedes-Benz India has been quietly testing a new cutting-edge diesel engine that can almost meet BSVI norms while running on BSIV fuel. That’s not all - the new engine promises to take the luxury quotient on the S up another notch. Mercedes-Benz has also introduced a new BS4-compliant petrol engine in the S-Class, but our focus stays on the diesel for now. So, what is the S-Class facelift all about? Let’s find out.

Only slightly has the S-Class altered its physical persona. From the front it looks a bit more imposing now. All of this is thanks to changes to the headlamps, an all-new bumper that makes it look wider, and the chrome lined three-slat grille, which was formerly reserved for Maybach editions. The black plastic panel at the centre of the grille has been added to hide the advanced radar system and the pop-out camera for the 360-degree view.

If the LED headlamps look a bit different, it’s because they are. The triple torch refers to the three DRL LED bars that sit in the upper part of the headlamp. These distinguish the Mercedes models at a glance as the E-Class has two, while the C-Class has one. The main LED beams have also been uprated to offer an even longer throw that now stretches upto 650 metres.

The sheet metal is the same and so when viewed in profile the S looks as stately and graceful as before. There is an added dash of youthfulness and practicality by way of the new sleek 5-spoke alloy wheels; these are 18-inch in diameter now, down from 19-inch earlier, and that makes them better suited for our roads. At the rear the tail lamps have a bit more sparkle and the faux exhaust tips stand out prominently.

On the inside, too, the changes are discreet. The driver’s instrument cluster and the central display are now fused together as one unit. The display is also an LED unit that offers more richness in colour. The system also offer Apple CarPlay and Android Auto functionality now. The driver’s cluster also gets different layouts depending on the drive mode you are in. You also get 64 colours to choose from for the ambient lighting and you can now choose different colours for different parts of the cabin. Also new are Qi-compatible wireless charging pads for compatible mobile devices.

As before the Rear Seat Comfort package allows you to really kick back and stretch out. The backrest reclines by 43.5 degrees, and the Chauffeur package pushes the front seat forward to open up 77mm of kneeroom.

Let’s get it clear - the S-Class also has a petrol version too, the S450. This is the familiar 3-litre V6 petrol engine that now makes more power and torque than the outgoing S400 petrol. However, we drove only the diesel on this drive.

As before, the new diesel engine is the new OM656 2.9 litre six-cylinder unit, but instead of a vee it is an inline design. So what about the traditional shortcomings of this layout? Asked how much longer the engine is in this layout, a palm width was thrust ahead. Also, new-generation cars are being designed to meet pedestrian protection norms despite having a taller engine when compared to the vee.

But the benefits are many, the engine is slimmer, simpler, more efficient and smoother. The silence and creaminess of this engine practically is almost unbelievable. At more than a few occasions, while at standstill, we thumbed the engine start-stop button only to realise the engine was already running, only to switch it off. The light rumble of the engine was only apparent when standing near the engine bay area. It was only when accelerating that some of that diesel murmur could be heard in the front seats. Driven with a light foot it was the sound of wind rushing over the A-pillar or the coarseness of the tarmac underneath the tyres that felt obvious.

To drive too, the S350d is sublime. This is the most powerful diesel offered by Mercedes in India, with bump up in power to 285PS and torque to 600Nm. Unlike most diesels, there is no sluggishness at low revs, or a sudden burst at any particular revs, and neither does the performance die at higher revs. It’s just usable everywhere. Part of the credit for this goes to the multi-stage turbo, which houses one fixed blade turbine for low speed responsiveness, while the other is a variable geometry turbine for better punch when the engine is revved up. For the record, the S350d can dash to 100kph from standstill in a claimed 6 seconds -- that is a second faster than the outgoing car. In Dynamic mode the gearbox is suitably more aggressive for a luxury limo, and keeps the going from getting ragged. It feels all the more effortless and easy to drive as the 9-speed gearbox is very well trained to be quick and smooth when shifting cogs.

When it comes to emissions, Mercedes claims that the S350d, even when running on BSIV fuel, will be almost as clean as it would be when running on BSVI fuel. The use of a diesel particulate filter, a selective catalytic reduction convertor and AdBlue can counter the high sulphur content of BSIV fuel. AdBlue is a liquid additive that has urea in it, which when sprayed into the exhaust converts nitrogen oxides into water vapour and nitrogen. While these are some of the hero talking points, the hidden heroes like the piston design, the variable valve timing and turbocharger help burn fuel better.

The only area where we feel the S-Class could do better is the ride quality. A hard to miss up-and-down bobbing movement can be felt on all but the smoothest of stretches. Annoyingly, this sensation is all too pronounced in the second row. One easy workaround is to drive in Dynamic mode, which restrains this tendency significantly while still being pliant enough for most city roads.The new rims and tyres with taller sidewalls no doubt help it out here. The chassis and air suspension have not been tweaked and so the setup is carried over as is.

So the W222 has updated hardware and software for Advanced Driver Assistance systems. The Distronic system can not only adapt speed while following a vehicle, it can steer too. There is the usual blindspot assistance and autonomous braking to reduce chances of a collision. The Park Assist system feels more complete now. The update system, apart from steering into an available parking spot, can even changes gears to switch between forward and reverse all on its own, making it truly autonomous now.

All of this is delivered at a marginally higher price than before. So, the absence of Mercedes’ Magic Body Control is missed but can’t be lamented about. However, the absence of memory functions for the front seats or touch support for the rear entertainment screens is a bit disappointing. But none of that can take away from the brilliance of the new diesel engine-equipped S-Class. An engine that not only meets the S’ lofty standards, but raises them to a new high. Quite simply, the S350d has elevated the game yet again.