Has Maruti-Suzuki come up with yet another benchmark in the entry-level segment with the S-Presso? 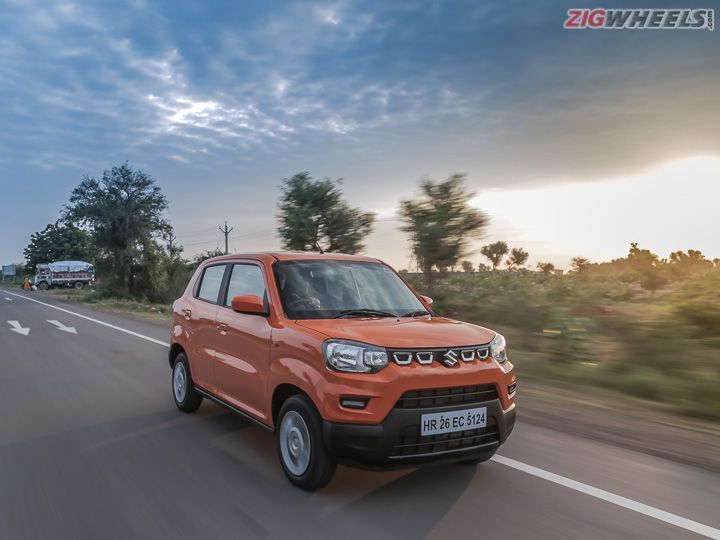 There is always a buzz around any upcoming Maruti car and when the car in question is going to be an affordable one, the one that follows in the footsteps of the Alto and the legendary 800, the expectations are sky high. Meet the S-Presso, which as the name suggests is trying to offer a solid punch in a tiny footprint. So has Maruti delivered yet another ideal affordable hatch? Read on to find the answer.

Quirky but not attractive

Every car has at least that one angle from where it looks attractive. Unfortunately with the S-presso, most will find it hard to find one. Upfront it does have some attractive elements, like the headlamps and the Vitara Brezza-inspired grille which gives it an in-your-face look. But underneath the grille, the large black bumper section looks a bit empty. You don’t get fog lamps, no contrasting colour highlighting and even the not so fancy LED DRLs are optional extras for which Maruti charges Rs 10,000!

Moving on to the side, the squared off dimensions makes the S-Presso look like a mini SUV. But it looks a bit flat as even the wheel arches aren’t flared enough and it does lack a bit of muscle that you expect.  But it is from the rear where the S-Presso looks most appealing. The bulging boot-lid and the well designed tail lamps look nice. But like the front, the narrow width and tall body does make it look a bit odd.

The S-Presso is based on the Heartect-K platform which is different from the one found on the Wagon-R. In terms of dimensions, it is narrower and shorter than the Renault Kwid but is noticeably taller.

Like the exterior, the interior of the S-Presso is quirky, but the execution is much better. The dash design will remind you of a Mini Cooper as the round shaped centre console houses the instrumentation, a 7-inch touchscreen infotainment system and air-con controls. The centre two vents too get a unique placement as they are placed high up, which helps improve airflow in the tall cabin. The air conditioning system is strong and effective too and it had no trouble to cool the airy cabin even in hot Jodhpur.

Thanks to the wide opening doors and the tall seat height, ingress and egress is very easy. The quality of plastics as well as the fit and finish is appreciable for a budget hatch. The instrument cluster includes a digital speedometer and fuel gauge, but there’s no rev counter here. It looks sporty and is quite easy to read on the move. The S-Presso’s cabin is quite practical too. It gets a small glove box, a scooped out storage cavity above that, two cup holders below the centre console and big front door pockets that can accommodate a one litre bottle with ease.

Drivers will appreciate the good visibility out of the front windscreen thanks to the thin A-pillars and the high bonnet. The front seats are placed high up and despite not having steering or seat height adjust, most won't have a problem with the high driving position of the S-Presso. When it comes to comfort, the front seat cushioning on the S-Presso is a bit too soft. The buckets are comfortable enough for short drives, but anything more than that, you might have to stop for a break or two.

The rear seat space is where the S-Presso surprises the most. Despite being much smaller, the S-Presso offers much more room at the rear than the Renault Kwid. To put things in perspective, as compared to the Renault Kwid, the S-Presso has 100mm more knee room, 20mm more headroom and 5mm more shoulder room. Sadly, save for a small cubby hole on the floor console, there are no storage spaces at the rear.

The boot, at 270 litres, is spacious enough. That’s 93 litres more than the Alto, but 9 litre less than the updated Kwid. It is deep and well shaped; but the opening is a bit narrow, which means loading big suitcases won't be the easiest.

While the S-Presso is practical, it isn’t setting any benchmarks in terms of features. Highlights include the 7-inch touchscreen (with Android Auto and Apple CarPlay), manual air-conditioning, steering-mounted audio controls and front power windows. For the price, we think it could’ve done with daytime running lamps, rear power windows, an armrest for the rear seat and a parking camera — all of which the Renault Kwid offers.

In terms of safety, a driver’s airbag and ABS with EBD is offered as standard across all variants. The co-driver airbag, and seat belts with pretensioners and load limiter is standard only on the top end VXi+ variant, and a Rs 6000 optional extra on every other variant.

What’s more, the base variant of the S-Presso is too bare bones to even consider. It’s missing essentials like air-conditioning and power steering. The L variant adds these in, but is still lacklustre in what it’s offering. Between the VXi (O) and the VXi+ we’d opt for the latter considering it offers just about enough to be a modern day small hatchback.

The S-Presso is powered by the same 1.0-litre, 3-cylinder petrol motor found in the Alto K10 and the Wagon R. But crucially in the S-Presso, it is now BS6 compliant. Despite the upgrade, the engine is still a benchmark in the segment and hasn’t lost any of its pep.

Like before, the motor is responsive and has a linear tug from low engine speeds, making it great for in-city commutes. In fact, the motor’s drivability is so impressive that you can stay in third gear from as low as 20kmph without any judders or vibration from the motor. Out on the highway, the motor has no hiccups getting up to 80-100kmph, and staying there all day long. But ask more from the engine and it begins to feel strained and coarse. The engine gets noisy past 3500rpm and there is a lot of road noise seeping in the cabin too. Add that the sound insulation isn't particularly great, and it’s best you tackle highway commutes at sedate speeds.

The S-Presso’s 5-speed manual gearbox is crisp and snappy to use. The light and short throw allows you to execute a quick shift with ease, and this reduces the stress on the driver even further. We also sampled the AMT version of the S-Presso. Whether it be ambling along in the city or even cruising steadily on the highway, this gearbox works really well. Like with all AMTs, it does show its basic roots when you are in need of instant change of pace. The gearbox struggles to drop the gears quickly and there is a brief pause before the power is delivered. So, overtaking on a narrow two lane road needs to be planned and it’s best to gently feed in the power. You can also use the manual mode in which the gearbox holds on to gears. For everyday driving, the auto mode works great, and it’s only if you are in a real hurry or need more engine braking (while going downhill, for example), will you feel the need to swap cogs yourself.

Another aspect where the S-Presso really surprises you is the way it tackles our ever broken roads. At low speeds, you do feel the lightness of the chassis and the firmness of the suspension as it feels a bit skittish over a broken patch of road. But to our surprise, if you tackle the same patch at a higher speed, the S-Presso just glides over the imperfections. The suspension does well to soften the blows from potholes even on the highway. But being tall and narrow, it’s better to drive at a sensible pace, and not change lanes in a hurry either.

We hardly came across any serious corners, so it was difficult to assess its handling prowess. But first impressions are pretty positive. The steering, though a little vague at first, feels surprisingly direct as you add more lock. It also felt safe and predictable till about 90-100kmph. But once past that, it does feel a bit floaty and this car feels best when driven in a relaxed manner.

Clearly, the S-Presso has some flashes of brilliance but has its shortcomings too. Let's start with the positives first. Despite being a small car, there is a surprising amount of room on the inside, the K-series engine is still a benchmark and thanks to its easy to drive nature, the S-Presso is ideal for a first car buyer.

On the downside, the S-Presso doesn’t offer much for the price it commands. Second, it isn’t particularly attractive to look at either. It looks like a budget car from the outside, which will have you spend on accessories heavily. And in that case, the price strays into WagonR territory, which is simply a much bigger and better car in almost every way.