Maruti is trying many things in one stroke – entering the crossover segment, launching just diesel variants, introducing a new and more powerful diesel engine, and improving on every aspect of car building (which they know mighty well). All this with the launch of the new Maruti Suzuki S-Cross. 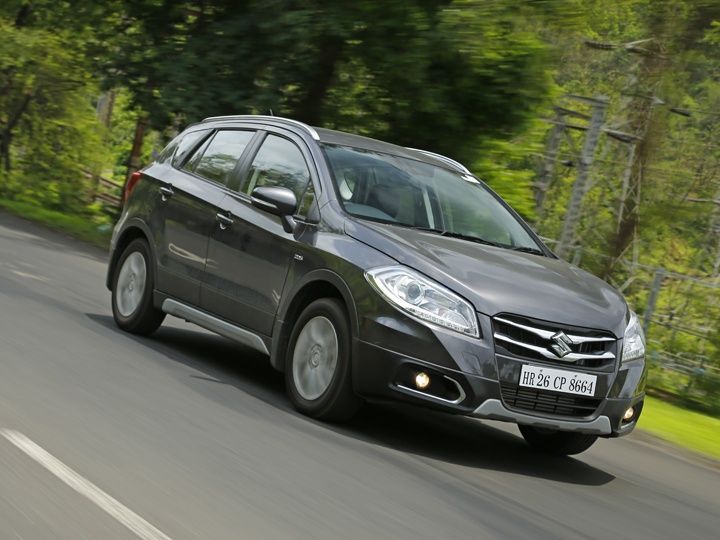 Termed as a premium crossover, the S-Cross has plenty more to offer than the usual run of the mill hatchbacks on stilts which are often positioned as a crossover. The new Maruti packed to the brim with features, has acres of cabin space and uses top-notch materials never seen on any Maruti hatchback till date.

Design being subjective, I have a mixed feeling about the Maruti S-Cross’ exterior design. For a premium crossover which promises to give best of both world – SUV and sedan, it feels a bit conservative. The front is wide and imposing, with strong character lines on the bonnet and large sweptback headlamps which give away its SX4 lineage. The stub nose and narrow twin-slat chrome grille give it a pure Suzuki appearance. While the curvaceous front bumper, chrome highlights around the circular foglamps and silver sump guard add to the SUV-ish masculine styling.

In profile it’s more hatchback-like than a SUV though the all-round black plastic cladding and silver roof rails do try to imitate one. It looks rather long, and at 4,300mm is clearly 300mm longer than most hatchbacks available in India currently. In terms of dimensions, the Maruti S-Cross has a width of 1,765mm; height with roofrails is 1,590mm and has a good ground clearance of 180mm. The prominent shoulder line from headlight to tail lamps give the Maruti S-Cross a solid, sturdy appearance.

But, Maruti Suzuki could have given a more attractive and larger alloy wheel design. Maybe a 17-inch wheel instead of the 16-inch wheels with 60 profile tyres; though the latter would ensure better ride quality on our roads. The wing rear view mirrors are also old school, but come with integrated indicators.

At the back the flared tail lamp is split, with one half overlapping on to the bootlid. The deep set registration plate and rear bumper with black cladding and silver scratch plates give it a sporty appearance. So, to me the front has more character and suits the “Premium Crossover” tag than the rest of the exterior design which, in proportion, doesn’t manage to keep up.

The Maruti S-Cross has a quite an upmarket cabin design and the quality is unlike any other hatchback, or sedan for that matter, that rolls out of the production line at Maruti Suzuki in India. The dashboard has a nice two-tone effect, with the extreme top and bottom part made up of harder plastic similar to the ones on Maruti Swift; while the middle section consists of good quality soft-touch plastic. In higher variants, the aircon vents and touchscreen for the Smart Play infotainment system come surrounded with a hexagonal silver highlight, which adds to the premium feel of the S-Cross.

Below it is the centre console, highlighted with silver accents, and with plenty of storage space and also houses controls for the air-conditioning. The door panels have large cavities and can comfortably hold 1-litre bottles, in addition to a couple of coffee cup holders next to the hand-brake.

The three-spoke, black steering wheel with silver highlights looks similar to other Maruti cars, but has some additional steering mounted telephone controls. Also, carried forward from other Maruti models is the driver’s information TFT display with trip metre and real time fuel consumption.

There are other bits in chrome finish too such as the AC knobs, door handles and the parking brake lever. Overall, the cabin looks pretty upmarket, especially in our top of the line variant which has leather on the seats and steering wheel, and PVC on the door panels. What is lacking though is rear AC vents and speed sensitive, door locking mechanism.

The seats for a car of this size isn’t too large, but supportive enough for city use. What’s impressive is its long 2,600mm wheelbase, which helps in carving out good space for the front and, more importantly in India, for the rear passengers. There more than adequate legroom at the back and ample of headroom, to make the all-black cabin feel airy. Another big advantage the S-Cross will have over other crossover hatchbacks is its large bootspace of 353-litre which can be expanded by folding the 60:40 split rear seat backrest to 810-litres.

As expected, Maruti has tweaked the international S-Cross to suit the Indian needs and price expectation. Apart from the tuned suspension, the crossover also gets better insulation of the cabin, dual horns, smaller 16-inch wheels with high profile JK tyres.

Maruti is not looking at positioning the S-Cross as just another crossover hatch, but is pushing for the premium tag and has packed the model with useful features. So push button start, ABS, front airbags, reverse parking with sensor, electric bootlid release and disc brake on all four wheels are standard across trims. While top variants get whole bunch of features such as automatic HID projector headlamps, steering mounted audio controls, keyless entry, all-round power windows with auto up/down feature, music system with AUX and USB connectivity positioned conveniently within the front centre arm rest.

And no that’s not it, there’s more... Rain sensing wipers, illuminated glovebox and bootspace,voice command, rear camera, reclining rear seats and cruise control. Also on the higher variants the Maruti S-Cross is equipped with a touchscreen infotainment system which, however, isn’t very intuitive.

The smart, only diesel powertrain move we were talking about earlier should payoff, considering the fact that petrol variants consist an insignificant 5-6 per cent in this segment. So, Maruti has brought a powerful new 120PS, 1.6-litre Fiat sourced oil-burner, named as “DDiS 320” in sync to its torque rating of 320Nm. It’s the most powerful engine available in the segment – making stronger power out than the Renault Duster and Hyundai i20 Active. Moreover, it is appropriately mated to a 6-speed manual transmission. Maruti feels that there is no need of an automatic transmission just yet, as the AT seekers are very few in the market. The DDiS 320 engine as of now has close 69 per cent localisation, which would clearly make it a more expensive proposition.

For more budget friendly option, Maruti Suzuki has the smaller, tried and tested 1.3-litre DDiS (Fiat multijet) which already powers plenty of other car models available in India. On the Maruti S-Cross, the “DDiS 200” as the name suggests produces 200Nm of peak torque at 1,750rpm and has maximum power of 90PS at 4,000rpm. As we’re pretty familiar with this engine we’ll talk about the new diesel motor here.

The peppy 1.6-litre diesel engine is what you need in a car of this stature. There’s ample pull pretty much from the word go, with just a mild lag under 1,500rpm till the turbo spools in. The 6-speed manual transmission has well sorted gearing, so that one doesn’t go throw the hassle of constant syhifts during busy city driving. Plus, the 320NM of torque surges in reasonably early to ensure that the Maruti S-Cross sails over speed breaker even in second gear.

On highways it feels like a bigger car, as the power delivery in any gear is enough to overtake pretty much everything plying on the road. The DDiS 320 can propel the Maruti S-Cross from 0-100kmph in an impressive 11.3 seconds, and has a claimed fuel-efficiency of over 22kmpl. The gear shifts, however, feels rubbery; and the clutch although soft, does not release as progressively. So, one has to be cautious when releasing the clutch, to avoid stalling.

Maruti has paid special attention on optimising the McPherson struts and torsion beam coil spring suspension so that it can be put to rest on Indian road conditions. And the high profile tyre comes to use here and cushion the ride further.

At city speeds the Maruti S-Cross rides with a certain poise and confidence which smaller Maruti's lack. It does manage to keep most road undulations at bay, but larger potholes still manage to make the suspension bottom out, unsettling the crossover. For most parts though, it offers a comfortable ride for passengers on the front and rear seats.

It's long wheelbase, wide stance and suspension setup give the Maruti Suzuki S-Cross very confident handling. If you like the way the Maruti Swift and DZire handle on the road, then you will love what the S-Cross has to offer. It's a larger car and weighs around 1,275kg, and so it is more grounded than its smaller siblings. And yet is extremely well balanced and remains flat around corners. Talking about handling, a lot of its character comes thanks to a precise steering wheel but it would have felt more confident has it weighed better. However, step on the pedal and you do feel a bit of torque steer on the wheel.

All four disc brakes offer very impressive bite, and even under hard breaking the S-Cross doesn't lose its poise, anchoring it pretty much a straight line.

To compliment the handling, the DDiS 320 has a hundred and twenty horse, which can bail you out from most tricky overtaking manoeuvres. But, a major dent in the thrilling dynamics is tyres, which screech at slightest provocation and aren't sure footed on wet roads.

Over the years Maruti Suzuki has gathered a reputation of making very efficient cars. This S-Cross with the 1.6-litre mill consistently returned 15kmpl while 17.2kmpl was the best we during our drive to Nashik, which we thought to be fairly decent.

Unlike many, Maruti as a brand doesn't create too much hype around their soon to be launched models. Though, there not much noise around the Maruti Suzuki S-Cross right now, when it is launched the next month and when the prices get announced, it'll create quite a buzz. As a car, it's the best hatchback Maruti has ever launched in India with premium interiors, ample cabin space and strong driving dynamics. But, the biggest concern remains whether Maruti would overcharge for the premium tag.

Recommended Variant : S Cross DDiS 200 Alpha
Was this article helpful Yes No
Sorry about that