Lexus’ flagship in India is the LX 450d, which is built on the hero-genes of Toyota’s Land Cruiser LC200. How does the Lexus badge transform this brute of an SUV? 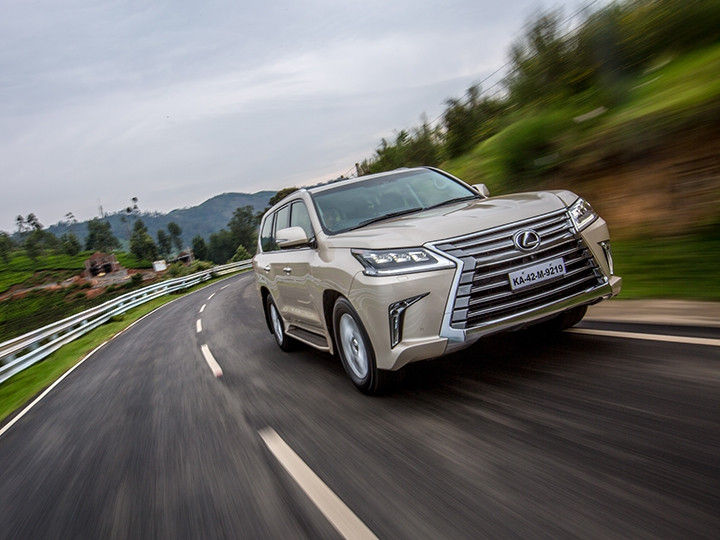 Lexus has chosen modern, luxurious and intelligent hybrid vehicles like the ES and RX as their calling card. But there is a fly in the ointment, a ginormous one, and it is called the LX 450d. Sitting right at the very top of Lexus’s India line-up is this properly old-school and gigantic SUV. It isn’t a hybrid, nor is it petrol. Underneath, it is built around a heavy duty body-on-frame chassis, and as such it isn’t a flag bearer for modern-day Lexus. So, why has Lexus brought it? This is because for many Indians the fascination with brand Lexus began with their introduction to the older LX, many of which were imported privately into India. So, what sparkle does the LX 450d bring to brand Lexus? Let’s hop in.

The visual impact the LX 450d makes is much like a meteor strike. It is packed with huge energy and plays its own apocalyptic theme music too. If it weren’t so intense and full of menace the LX would probably sneer at you. There’s a wickedness in those three LED-powered headlamps. The spindle grille stands out on all Lexus vehicles and in these XXXL proportions, it is all but blinding. From the front the LX is very much its own machine and shares no exterior panels with the Toyota LC200 on which it is based.

However, when you view it from the side the connection to the LC is obvious. Both share the same profile, but even here Lexus has tweaked the DLO (daylight opening, aka line surrounding the windows) with a kink at the D-pillar. All the sheet metal seems a bit sharper and crispier. The 18-inch wheels are also the same size as the LC. Despite the L-shaped tail lamps the rear isn’t striking to look at. But, when you open it up everything is forgiven.

No, it isn’t because it has a third row of seats. Actually, it doesn’t. Shocking, right? While the Land Cruiser offers the third row, the LX does away with it. Okay, the good bit? The split tail gate! It makes for the ultimate impromptu picnic bench. The lower section that folds downwards is said to be strong enough for two adults to sit on! And from there you can reach back into the suitably XL-sized boot to pull out your picnic hamper or kitchen sink, depending on whether you were looking to move house or just take a break from it all. As Lexus showed at the launch event, with all doors thrown open and the volume cranked up on the Mark Levinson music system, you really can have a party with the LX as the music system. How loud was it? Some guests in the hotel asked for it to be turned down. That loud. Or maybe they were grumpy that they weren’t invited. Anywho.

Recommended Read: Why does the LX 450d cost a crore more than the Land Cruiser?

Are we getting in?

Yes we are. And, remember to watch your step; you’ll have to haul yourself up from Mother Earth. The running board helps, and the low setting for the adjustable suspension does too. But even then, forget about “dropping in.” As is common in body-on-frame SUVs the dimensions on the outside don’t translate into as much space on the inside.

In the second row the knee-room is adequate, not luxuriant. And, as the seats sit low to the floor, the lack of under-thigh support is obvious. And galling. Nonetheless, the sense of width is absolutely incredible and sitting three abreast would be no problem either. The seats are wrapped in premium leather and have electric motors to slide back and forth and they tumble forward with just one tug.

It’s always the small details that give a vehicle its character and charm. As you grab the door handle to shut the front door, the light soft rubber texture on the inside seems very thoughtful. As the door thuds shut, the other striking bit is the silence. As you roll the three-layered window pane up, all the noise, even that of a person standing right outside talking to you, is silenced. We tried it, and were shocked by the results! Then when you add to that the large, sofa-like seats with many ways of power adjustment, the LX pampers you further. Discreet ambient lighting adds to the richness and the beautiful metal knobs for the music system felt good to the touch too.

Sitting atop the sturdy dashboard is the large 12.3-inch display, and the design feels acceptable till there. However, as your gaze sweeps down, the centre console design seems a bit muddled. The space around the gear lever is also littered with knobs and buttons. There’s the overly sensitive mouse-like controller for the onscreen menus, then there are the two dials for the 4-wheel drive system, two rocker switches for the ride-height control and the transfer case. Apart from these, there are even more switches here!

Yes, the LX packs a lot. There is a colour heads-up, four-zone climate control, 19-speaker Mark Levinson music system, and cooled seats at the front. There is also a wireless charger for the right phone. Then some things catch your eye, like the Climate Concierge button on the centre console. A press of this button makes use of sensors in the car to control air conditioning for the four zones depending on the requirements. For instance, if someone steps into the LX’s rear right passenger seat, the air con system will be able to read the higher body temperature of this occupant as compared to the others and adjust cooling for him accordingly!

Then there are the two 11-inch infotainment screens at the rear which are said to pack AI! That can be explained easily–sensors allow these screens to adjust brightness depending on the conditions outside. Clearly, the LX carries a lot more kit to pamper its occupants than its more mechanical sibling, the LC.

Mammoth on the move

I’d better tell you this first. The narrow roads of Ooty aren’t ideal to get to terms with something like the LX 450d. Also, time was in short supply. It was only when we had made it through the market outside the hotel that I bothered to look at anything but the road.

The sheer width of it made weaving past the rickshaws and bikes a bit nerve wracking. Once we were on open roads I peeked at the screen in the driver’s cluster and could see “Eco” written there. Was that to blame for the dull throttle responses? On a couple of occasions I had stepped on the gas hard to get the LX to move a bit faster than what it seemed inclined to do at first prod. The result was a sudden burst of torque, and the sigh of the massive LX hurtling forward frightened a few bystanders and me! Of the 5 modes on offer, we were in the middle ground, Normal. But, in this too, the system slipped into the Eco setting every now and then.

To overtake the vehicles ahead, and for a more prompt and enjoyable driving experience, I found the Sport mode to be the best. The change brought the 650Nm of torque from the mighty 4.5 litre V8 diesel to the fore. The 265PS of power is a footnote here. The 6-speed gearbox also changes its attitude for a greater sense of urgency, but even in the more relaxed Comfort or Normal mode the gearshifts feel sudden and sharp.

In the most aggressive Sport+ mode, the LX can get from 0-100kmph in 8.6 seconds! It is also said to be capable of hitting a top speed of 210kmph. Frankly, these numbers are a bit shocking when you take its mass into context.

Who is in charge?

I’d say, the LX. You try to hustle it, and in its Sport+ mode the LX will let you, but you learn to keep it within its well-marked boundaries. The steering is numb and that means the size should intimidate you. If it doesn’t, the heft should. Expecting a near-three tonne old-school, body-on-frame SUV to enjoy being hustled is a bit optimistic, or naive. Sure, after some time it starts to feel quite reasonable, but even in Sport+ mode, pirouetting through hairpins, I couldn’t help but think of the circus’ elephant act. It is fantastic and remarkable, but it is always keeping the size in context.

Ride quality and ground clearance are controlled by the adaptive hydraulic suspension. Adjustments to the damping help make the ditches seem shallower than expected, and the LX’s mass seems less obvious through tighter corners. But like a pair of bulky spectacles, the LX’s size never quite fades out of your world view. Quite simple, if you are looking for something more urban and spirited, the offerings that wear the Union Jack with pride would suit you better.

We didn’t. Couldn’t. Yes. Seriously. Despite the low ratios, the five off-road modes, the crawl control, the turn assist, the underbody protection and the 225mm of ground clearance we just didn’t go off the tarmac. We hope to find an opportunity to do so soon. While the LX will surely be uber capable in the rough stuff, it bears mentioning that its hardware is virtually identical to the LC200. The LC has also been updated with drive modes. It also has the better off-road genetics as it has better approach and departure angles than the LX (32, 25 and 24, 20). The only thing the LC misses out on is the adjustable suspension.

And, frankly the Range Rover can claim to do better in those regards too. The RR might not be dislodged as the Mumbai elites’ best friend as its 900mm water wading is 200mm more than the LX. But, where the LX will surely hold the psychological advantage is its legendary reputation for being virtually indestructible. And when doing this kind of pointless spec-sheet analysis, that should count too. More so, because who in their right minds is going to take one of these off-road.

With offerings like Toyota’s very own LC 200 and the Range Rover, the LX doesn’t seem like a very convincing package. It won’t be the most comfortable luxury SUV to be chauffeured around in, nor the most fun from behind the wheel, and while plenty capable off-road, you could do better for less. But, the LX 450d is swagger personified. The LX 450d is bling. And rugged. And, yes, at its Rs2.32 crore price it is a bit obtuse too. But, that price brings you a more luxurious and sophisticated machine and so the LX 450d will, like before, continue to be a statement like none other.