Lexus, Toyota's luxury arm, is looking to muscle onto the turf of the Europeans. But, what bait does the ES 300h sedan dangle to tempt the spoiled-for-choice car buyer away from the competition? We take a quick spin to figure that out. 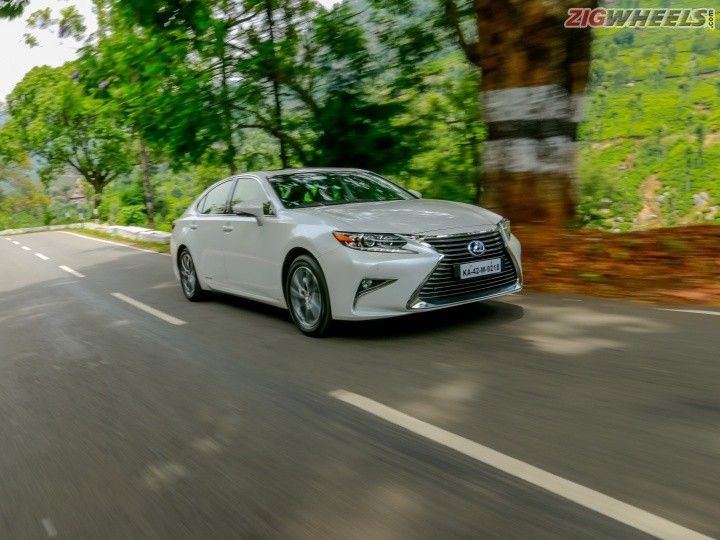 Right, so the ES is the second rung in Lexus' sedan line-up. It sits a rung below the GS, which is the direct competitor to the likes of BMW's 5 Series and Audi's A6. At the same time, it is too large to compete with the BMW 3 Series or Mercedes-Benz C-Class directly either. Interestingly, Lexus has a simple petrol engine variant of the ES, but they have chosen to introduce hybrids keeping global trends in mind. Just for your information, the Lexus lineup also has the IS range at the start and the LS right at the top. The all-new LS was showcased at Lexus' India debut in March and is expected to make its way here to compete with the likes of the Mercedes S-Class.

Yes, the ES 300h! It looks striking, doesn't it? It’s like a cat that’s taking a nice stretch. Long and low, but just a bit curvy. Looking at it from the side you wouldn't think it is related to the understated Toyota Camry Hybrid, but it is. A 45mm longer wheelbase and the lower, sportier stance set it apart sufficiently. From the front, the Lexus language shouts at you and it surely isn't subtle. The large spindle grille harks back to Toyota's origins as a handloom manufacturer; the thick chrome surround and the jagged edge of the bi-LED headlamps are common traits across the Lexus range. The fog lamps are LED units too. Jump to the rear and the way the tail lamps cut into the boot will remind you of the Camry. However, the large L-shaped light guides look distinctive and eye-catching.

How is it on the inside?

The ES' dashboard has a simple and somewhat understated design. The cabin uses top quality leather for the dash top with smart stitching. A band of wood underlined by a strip of satin splits the dashboard. While it all sounds good, somehow the combination misses the mark. The use of silver plastics on the centre console feels out of place in a vehicle that will cost near about Rs 70 lakh on-road. The large buttons also strike a more functional and tough tone rather than one of luxury.

Other contact points such as the knobs for the volume control feel plasticky and the switches for the power windows and ORVM adjustment are very plain Jane. But put that aside and you'll find that there is a good amount of equipment on offer. The front seats are cooled, and there's a superb 15-speaker, 5.1 channel Mark Levinson music system. Once you hear the audio quality, you won't forget the name. The steering is electrically adjustable and so are the sumptuous seats and the ES gets memory settings too. Since the ES is available in one variant only, all these features are standard. As is the sunroof and 10 airbags! The airbag count is one more than the Camry Hybrid.

Step into the rear and you'll find an enormous amount of knee-room on offer which will better most cars in this price range. Clearly, the 2820mm wheelbase shows its benefit here. The leather upholstery is a highlight once again, and even though you are seated a bit low, the seat offers good support. However, the sense of airiness is chipped away by the roofline which is some 30mm lower when compared to the Camry, and will ruffle hairdos of tall passengers. The ES will be best for two passengers, as the armrest would keep the middle occupant from sitting comfortably for longer distances.

In terms of equipment for the rear bench the ES is impressively kitted. It gets a powered sunblind for the rear windscreen and manual sunblinds for the windows. There's a three-zone climate control as well. The controls for the air-conditioning system and the infotainment system are housed in the armrest, which is very convenient, but sadly these have been lifted unembellished straight from the Camry. However, unlike the Camry, the ES misses out on the electrical seatback recline adjustment and the “boss-button” that lets you adjust the front passenger seat while sat in the back. Lexus say that the seat back angle is at just the right angle here to offer a comfortable experience, and we found it to our liking too. In terms of luggage carrying capacity, the ES offers a healthy 425 litres of storage, and that is despite the battery pack being stored in the boot and a full-size spare wheel.

With pleasure. And, what an experience it is. Driving between Ooty and Coonoor, we were climbing up and down through tea estates. As we coasted downhill, the generator would send electricity off to the batteries. And, at the next incline, the power was then sent to the front wheels to power us uphill in pure EV mode and in silence. The pleasure of silence is highly underrated. While Lexus won't say how exactly the ES differs from the Camry, they insist that the use of better sound deadening, more precise and closely watched manufacturing processes make a big difference in the overall experience.

On the move, there is a strong connect to the Camry Hybrid as the hybrid powertrain’s 205PS of power and 204-cell battery is the same as the Toyota. The Camry also claims to better the ES' 17.8kmpl fuel efficiency figure. Of course, when the occasion demanded it – for instance, to overtake another vehicle – the 2.5-litre Atkinson cycle-enabled petrol motor whirred to life. The distant thrum of the engine either signified that it was feeding power to the wheels, charging the battery, or both. The transitions were seamless, the cabin was calm, and after driving a hybrid like this one, it will be difficult to go back to a regular ICE motor. Also, the sense of efficiency, or the inefficiency, of an ICE motor, has been underlined rather effectively now. Apart from the EV mode, the ES packs three drive modes: Eco, Normal and Sport. The ES lunged forward even with light taps of the accelerator pedal when it was set to Sport mode. The electric motor seemed to kick in eagerly to get this sprightly feel.

The ES’ steering also feels a lot better weighted and more direct to use than in the Camry. The brake pedal, though, feels mushy at first as this uses the generator to slow the car down. The ES is unlikely to be the choice for enthusiastic driving, however, the suspension setup is well suited to be chauffeured around in. The ES gobbles bad patches of tarmac with ease, especially at the low speeds that we were doing.

It is difficult to justify the ES 300h's Rs 55.27 lakh price tag, and its close and obvious relationship to the Toyota Camry Hybrid makes the paper comparisons harder to digest. Its price also pits it against more established and bigger vehicles such as the BMW 5 Series, Mercedes-Benz E-Class and Audi’s A6. However, the space on offer is a high point. Most notable, of course, is Lexus’ hybrid powertrain which gives the ES an advantage that the others just can’t match.The ES 300h offers a more ecologically responsible and economical-to-run luxury sedan. That’s also because Lexus is offering the ES 300h with a 1-lakh km and 3-year warranty for the car along with a 1.5-lakh, 5-year warranty on the hybrid system. When you back that with maintenance costs that are virtually half of the competition’s, the Lexus ES 300h certainly makes a robust case for itself, albeit a pricey one.

View All
All Upcoming Lexus Cars