It has half as many cylinders compared to the range-topping variant. Is it half the car, then? 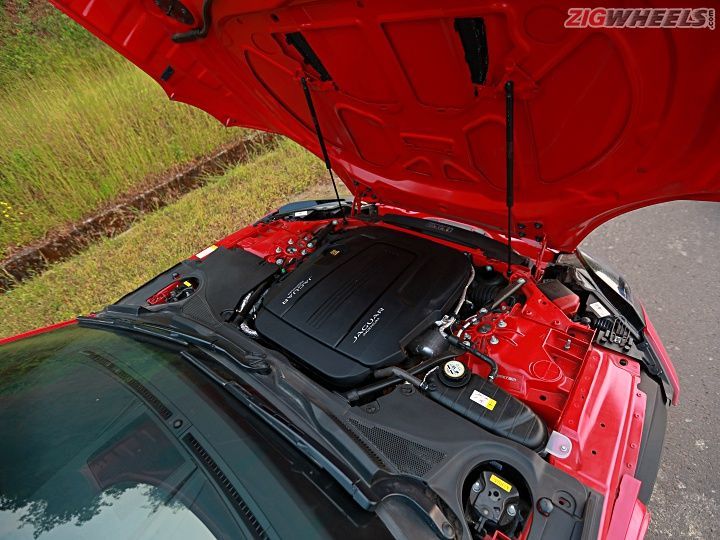 Downsizing ought to be bad. It has possibly ruined all that we love about the Jaguar F-Type. There’s not a chance in hell this is remotely as hair-raising as the V8 or grin-inducing as the V6. Or so we thought. Instead, what we stumbled upon is probably our favourite F-Type in the range.

There’s some glee in kicking the tail out in a car. That little slip from the rear wheels, that feeling of weight swinging from one side to the other, the snatch and ultimately, the catch as you make the F-Type point in the intended direction is so, so fluid. It’s easy too. You’d find yourself doing this a bit too often. The best bit - you don’t have to be an absolute driving legend to pull this off. No, it doesn’t have any fancy electronic aids to let you slide in style. But it’s got just enough power and more importantly, the right amount of feedback to let you know what’s going on. Naturally then, we spent a fair bit of our time sliding about on every wide corner we encountered.

If you plan on wearing your serious hat and wish to make a quick dash for the twisties, the little kitty will properly surprise you. Compare it to the V6, and you’ll find that there’s 52kg less weight on the nose. Naturally, the suspension has been altered to account for it. What you get is a cat that dives into corners like we haven’t seen before. Every small flick on the steering has a measurable impact on the front wheels. It’s a blipping joy to hustle through the switchbacks. The steering is just the right size, width and weight. Add the flat-bottom into the mix, and you’d find yourself giggling as you blitz through the chicanes and long bends.

It’s almost as if this particular version of the F-Type was meant to be a corner carver. The suspension setup shines through, especially when you’re gassing it through tight bends. You feel like you’re in total control, knowing what the car will do next. There are no nasty surprises here, you can dunk the F-Type hard into a corner and expect it to come out as intended at the end of it. Be slightly careful, though. When you’re braking hard before a turn, you’d feel the rear getting lighter and trying to play naughty. You have two options here - brake harder and take the good boy line or lock the steering and give it a bootful to make the kitty dance. We know what we’d do.

...you might ask. In isolation, the 2.0-litre turbo four-pot that produces 300PS and 400Nm may seem a bit blah. But put these numbers into context, and it suddenly starts making sense. The ‘entry-level’ V6 variant makes 340PS and 450Nm, which gives it about 215PS/ton. The smaller engine saves a lot of weight, which is why the power-to-weight is right up there at 197PS/ton. Jaguar claims the four-pot is good enough to hit 100kmph in 5.7 seconds, and clock a top speed of 250kmph. When we slapped our VBOX on, it managed a respectable 6.56 seconds to the ton with launch control. Stick the gearbox into Sport mode, left foot on the brake and bury the accelerator pedal into the mat. Let go off the brakes, and you’re hurling yourself towards the horizon at a frantic pace. Mind you, the time we managed was with regular fuel and on a super hot day. So, in ideal conditions and with high-octane fuel, ducking under the six-second mark seems entirely possible.

Unlike the V6 that needs to be revved into the meat of its rev range to really get some action, the four-pot has all the torque you need at the get-go. The Ingenium engine is pouring out all of that 400Nm from as low as 1500rpm, all the way up to 4500rpm. The upside to this, of course, is that you almost never have to force it to downshift to slingshot ahead of traffic. A gentle dab at the accelerator pedal works just fine. A smaller turbo-petrol engine also means there’s some (relative) saving in terms of fuel costs. As we babied the F-Type through our fuel runs, it returned the favour with 12.28kmpl out on the highway and 7.68kmpl inside the city.

What it most definitely lacks is the aural drama of the V8, or even the V6 for that matter. It doesn’t bellow, scream or shout at any point. Yes, it will crackle and pop if you’re pushing it really hard, but nothing more than that. Even with the ‘Active Exhaust’ switched on, the sound never becomes overbearing. For those who want their cars to sing and scream every time they touch the loud pedal, please invest in an aftermarket exhaust. But for those who like going fast without sounding fast, this F-Type should serve up the thrills amply.

And it never gets scary. It never feels unnerving, and it never makes you soil your pants. For anyone getting used to fast cars, the F-Type seems easy to drive, friendly even. If this is going to be your first sports car, you should feel right at home.

We have a love-hate relationship with the 8-speed, ZF-sourced automatic. When you’re belting it, it knows exactly what to do and drops gears within the blink of an eye. And if you’re in Dynamic mode, it will also hold on to the gears forever. But it does feel confused when you’re pottering about in the city. You sense that split-second of hesitation before it eventually gives you the gear you wanted. Also, there’s a prominent whine from the transmission you’d have to get used to.

What you’d also have to get used to is piloting the F-Type inside the city. You sit quite low, and the stiff suspension that made you giggle on the twisties begins to jiggle every part of your body. However, you get used to this pretty quickly. And for something that’s riding on 35-section 19-inch wheels, the ride quality is pretty darn nice. On Pune’s infamous ‘table top’ speed breakers, the F-Type hopped, skipped, and jumped over. No issues, and no discomfort. Nice.

You can also sneak in inter-city trips with this. On well-made highways, you shouldn’t have any issues munching miles. At 100kmph, the engine is ticking over at a lazy 1750rpm in eighth gear. You can do outlandish speeds too. Just keep a firm grip on the wheel, the front end tends to feel lighter and lighter as you stray over into sports car speeds.

And while you’re at it, make sure you brake gradually too. If you don’t, you’d notice some squirming and wiggling from the rear end as the weight shifts to the front. But you can breathe easy as the F-Type manages to shed speed quickly. You get good feedback from the pedal as the nose dips a bit while the speedo starts descending. From 80kmph, it took just 24.43 metres to come to a dead halt, and 38.75 metres from 100kmph. Mind you, our test car wasn’t equipped with the bigger (optional) 380mm front and 376mm rear discs. It had the standard 355mm front and 325mm rear setup. It’s safe to expect even better braking performance with the bigger brakes.

Finally, let’s speak about the elephant in the room. The ground clearance. Let’s just say you have to bear in mind that you will inevitably end up scraping it. It’s not the cars fault, our roads suck. But more often than not it’s the plastic deflector under the front splitter that takes the hit. So don’t feel all that bad about that horrible scraping noise.

And then, take a good look at the F-Type. We wouldn’t blame you if you had knots in your stomach. Because we don’t remember a single moment where we didn’t take the chance to ogle at it. Even when it was parked and we were busy stuffing food into our faces, we’d quickly sneak in a glance. I think they call this love.

What gives us joy is the fact that almost everyone from a 5-year-old kid to an 85-year-old grandmom appreciates the design. The number of ‘oohs’, ‘aahs’, and ‘wows’ we were subjected to over the few days we spent with the F-Type is a testimony to the fact that what you see on your screen is possibly the prettiest car of our era. This is automotive art, no less.

With the update, there’s a new set of bumpers, and the headlamps now get the LED treatment. They’ve improved a near perfect design. The single central exhaust pipe is one of the two ways you can tell there’s a four-pot under the hood; with the other being the obvious P300 badge.

Inside, there’s more drama with the design. You know the cabin is designed for the driver and the design underlines that plenty. But there are bits here that we’ve seen in more affordable Jags and also bits that have begun to show their age. For example, the instrument cluster looks a bit too 2014, and the quality of switches on the steering wheel and the stalks don’t feel all that great. Ditto with the door handles on the inside that feel plasticky.

Then there’s the fact that standard kit is a bit bare. You do get climate control, 6-way adjustable powered seats, a touchscreen and a Meridian sound system. But the dual-zone climate control, a parking camera, front parking sensors and memory seats are all optional extras. Of course, you wouldn’t mind paying for these when you’re spending big money. But for a car that costs as much, it’s slightly surprising you don’t get this as standard.

By all means. But do understand what you’re signing up for. For us, the F-Type 2.0 is a nice stepping stone into the world of sports cars. The power doesn’t intimidate, and there’s enough drama to keep you happy. It's also rounded off the F-Type range beautifully. The V8 is clearly the mad-hatter muscle car in the gang, the V6 is more of a GT, and this, this is the nimble sports car. We never imagined we’d say the least powerful variant is our favourite of the lot.

At around Rs 1.2 crore on-road, you do pay Porsche 718 money for this. Save for the want of better standard kit and a more special-feeling interior, we can’t really fault the F-Type 2.0. It’s a pukka sportscar that makes you and those around you smile. Isn’t that what cars are supposed to be?