Hyundai has made considerable changes to bring the Verna back into the game. How much can these improve an already hard to fault package? 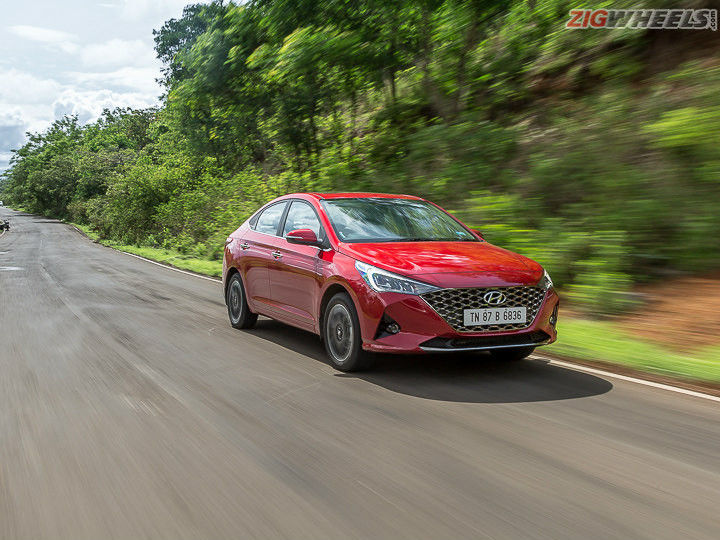 Hyundai has been on a launch spree of late, coming out with as many as five cars in just over a year's time. So when Hyundai announced the Verna facelift we at ZigWheels were a bit worried. Concerned because their recent launches like the Creta, Aura and the Elantra had Hyundai’s new ‘Sensuous Sportiness’ design language, that resulted in cars that were striking but also quite a bit over the top. But we are happy to report that Hyundai seems to have done a good job with the Verna facelift. Apart from the design changes the 2020 Verna also comes with new engine and gearbox options and the cabin is revamped too.

Hyundai’s new design language, called ‘Sensuous Sportiness,’ is bold but is also excessive in some cases. With the Verna, however, they seem to have hit the sweet spot. The biggest change is up front, where you get a bigger grille which is tastefully finished in a darker shade of chrome. You also get new LED headlamps which add to the attractiveness of the front. At the rear changes are minimal but you do get new tail lamps with LED lighting and the sporty new bumper with a faux diffuser makes the car look more athletic.

In profile, except for the sharply cut 16 inch wheels, the Verna remains unchanged. So you get the same coupe-like silhouette thanks to the swooping roofline. Overall, in our eyes, the Verna is easily the best looking compact sedan on sale.

In the turbo petrol, however, you get gloss black finish for the grille which makes the car look sportier. Even at the rear, the faux diffuser is finished in gloss black instead of matt finish in the CVT version.

Inside, the facelifted Verna remains mostly unchanged, which is no bad thing. So you get the same dash layout that is easy to get used to, and the interior quality and finish is class leading. Touch points like the steering wheel, switches, stalks and gear selector are finished in high quality materials. Yes, you won't find any soft touch plastics on the dash or the door pads but the texture and the grain feels premium. Finding an ideal driving position is easy thanks to the height-adjustable driver seat and the steering too adjusts for rake and reach. The seat itself is comfortable and you also get a cooling function to make your life easy on hot sunny days.

In terms of rear seating comfort the Verna still lags behind its main rivals, the Honda City and the Maruti Suzuki Ciaz. Where even Great Khali will easily fit in the Maruti or Honda, the Verna has enough knee room just for Rey Mysterio. Although knee room is just about enough, the same can’t be said about the headroom. The stylish swooping roofline is to blame here, as anyone more than 5 foot 10 inch tall will brush their heads against the roof lining. Even the limited cabin width makes the Verna strictly a four-seater. The seat itself, though, is well shaped and gives you ample back and underthigh support.

In terms of boot space, the Verna fares quite well. Sure, its capacity of 480 litres isn’t class leading, but the bay itself is well shaped and can easily gobble up a weekend’s luggage for four people with ease.

Now let's come to the changes which are mostly related to features. In the top-of-the-line SX(O) variant you get a bigger 8-inch touchscreen display that looks upmarket. This high resolution display looks crisp and the functionality too is top drawer thanks to the slick software. In fact it is as good as a high end tablet and it has loads of features crammed in too, like Apple CarPlay and Android Auto. You also get connected car features which include geo fence alert, live vehicle tracking, roadside assistance and emergency assist in case of an accident. You also get cool features like remote car cooling (only for automatic variants) and voice command, which you can activate by saying ‘Hello Blue Link!’ The features you can control with the voice command, however, are limited to just making calls or operating the onboard navigation. Apart from the infotainment system you also get an upgraded Arkamys music system which sounds better than before and offers great clarity for an OEM fitment.

Then you get two other new features which are a bit of hit and miss. You get an all-digital instrumentation which looks really cool but Hyundai should have given some customisable option to make it look a bit sober. Yes, you can choose between three themes but honestly there isn't much that changes, apart from minor font adjustments. Another new feature is the wireless charging pad, which on paper is a great addition. It works well with phones that have screen sizes less than six inches. But anything bigger and it wont fit on the charging pad because of the narrow cubby.

Apart from these new features you still get things like cooled front seats, push button engine stop start, automatic climate control, automatic headlamps and a sunroof. In terms of safety the top SX(O) variant gets six airbags, ESP, Hill Assist and ABS with EBD. Compared to the turbo petrol variant, the CVT version misses out on rear disc brakes and front parking sensors.

All the engines you now get with the Verna are brand new: a 1.5-litre diesel, a 1.0-litre Turbo petrol and a 1.5-litre naturally aspirated petrol. In this review we have driven the 1.5-litre petrol CVT version, which on paper might come across as the blandest of the bunch - but you’re in for a pleasant surprise once you get behind the wheel! This 1497cc petrol motor is basically a downsized version of the old 1.6 and it produces 115PS of power and 144Nm of torque, both of which are marginally lower than the outgoing engine. Hyundai has also replaced the old car’s 6-speed torque converter with a CVT transmission which should result in dull performance, right?

At least at low speeds, not at all. As it turns out, this combination feels quieter and more composed than before. It is creamy smooth in terms of its power delivery and also the sound it makes. Step on the gas and straight away this gearbox feels responsive yet buttery smooth. City driving is a breeze, as the CVT delivers just the right amount of pep you need. And even when you decide to step on it, the gearbox doesn’t have the typical stretched feeling that you get with a CVT transmission. Combining this with the Verna’s compact dimension results in a car that is extremely easy and smooth to drive in the city. Even out on the highway the Verna cruises in a relaxed manner with the engine ticking just over 1500rpm at 100kmph. Yes, you do feel it could have done with a bit more power, especially when you want to execute a quick overtake on a two-lane highway. In this scenario the CVT responds slowly and also the engine lacks a bit of punch in the upper reaches of the powerband.

This reflects in our acceleration test where the Verna petrol CVT posted a 0-100kmph time of 13.04 seconds, which is a second down on the old 1.6-litre engined car. This is also where the punchier turbocharged petrol with a modern DCT transmission will have an advantage over this version. So if your driving is mostly limited to the urban jungle you possibly will be happier with the CVT version of the Verna.

The smooth engine and gearbox is backed up by the ride quality too. Be it small imperfections, medium sized potholes or big sharp-edged ones, the Verna’s suspension feels surprisingly absorbent. Out on the highway the ride quality remains flat and consistent. Even sudden road imperfections don't catch this Hyundai off-guard, as the well tuned springs and dampers do their job and also settle back quickly. The suspension is silent too, which adds to the plush character of the Verna. But a bit more sound insulation would have made it even better, as a considerable amount of road noise seeps into the cabin especially on cement roads.

The old Verna never felt sporty in terms of its handling and this still holds true for the new one. It feels a bit lazy when you throw it into corners as the relatively soft suspension results in a considerable amount of body roll. Even the steering is a mere tool that turns the front wheels, as it lacks directness or any sort of feedback to inspire driver confidence. So it’s best to drive this car in a relaxed manner and enjoy this car's smoothness and great ride comfort. The brakes too on the Verna won't help with giving an enthusiastic driver much confidence either. They have a decent amount of bite, but the ABS cuts in abruptly over loose surfaces as the car keeps lunging forward, which can get a bit unnerving.

Where this car excels though is in the city. The light steering, great forward visibility, creamy smooth engine and gearbox makes your daily commutes extremely comfortable and enjoyable.

The Verna's never been a car that had something exceptionally exciting to it. It just gave you the right balance of quality, comfort, and features which made it a tempting package. With the facelift, that essence hasn't changed. And, except for a cramped rear seat there still isn’t much to dislike about it either.

This petrol-CVT version may seem like a boring choice — but, it's actually one of the best sedans for relaxed daily commutes. So, while it may seem like bland vanilla ice cream on paper, it has a secret sauce, which leaves just the right taste in your mouth.