The Honda Grazia is the latest entrant in the 125cc scooter segment. But how does it fare against one of our favourites in this space, the Suzuki Access 125? 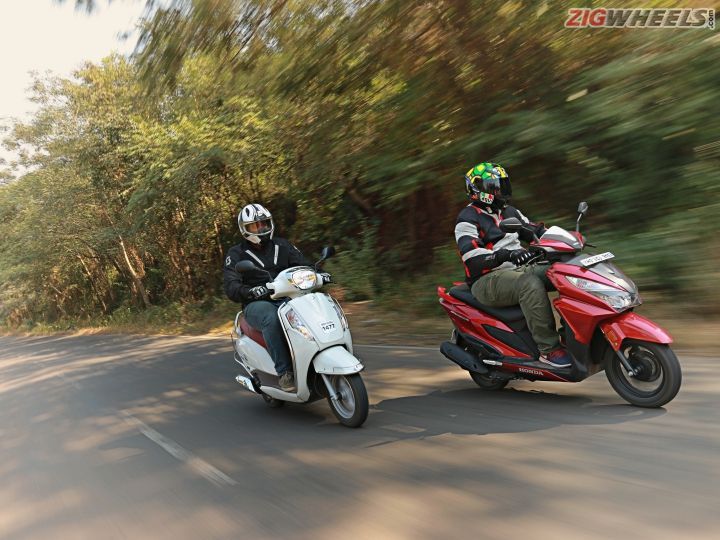 Scooter sales are on an all-time high and they are giving tough competition to even commuter motorcycles. And there’s a good reason for it. Scooters are easy to ride, easy on the pocket and and very versatile. But the bulk of the scooter sales come from 110cc scooters. So what do you do if you want a bit of more zing? Barring the overtly sporty Aprilia SR150, it’s been the Suzuki Access 125 that has been the go-to scooter for those wanting something more enthusiastic in this space. Ever since it was launched, the Access has pretty much ruled the 125cc scooter segment. And it’s popularity has only gone up since it received major update last year. But Honda, which has been utterly dominating the 110cc scooter market is looking to extend its foothold. And their latest 125cc contender is the new Grazia. So can the snazzy Honda Grazia beat our choice as the best 125cc scooter in India?

When it comes to design both these scooters are as different as chalk and cheese. The Grazia adopts sharper lines and is a sporty looking scooter while the Access is much more mellow with its retro-modern lines and curves. The first thing that you will notice about the Honda Grazia is the massive angular LED headlamp (first for any scooter in India) while the turn indicators have been nicely integrated into it. Honda designers have also cleverly used the black and silver panels to increase its visual appeal further.

The sleek side panels continue the chiselled look of the front end onto the rear. The large split grab rails not only look good but are also comfortable for the pillion to hold on to. The three-piece tail light looks appealing but aren’t LED units. On the other hand, the Access gets a traditional handlebar mounted headlamp with chrome surrounds that looks neat but the rear section looks a bit too conventional. Also the rather large exhaust muffler looks a bit out of place. The front-section and the mudguard on the Access are made of metal, but the rear body panels are plastic.

The Grazia on the other hand is an all-plastic body scooter which is understandable given its chiselled appearance. Parked side-by-side it is the Grazia that will gather more eyeballs with its angular modern lines and it is definitely among the most striking looking scooters on sale in India today. The bottom line is that the Grazia, with its sporty styling will appeal to the youngsters, while the Access has a more family-friendly vibe to its design.

The Honda Grazia gets loaded with features like an all-digital instrument console which displays the speedometer, tachometer, odometer, tripmeter, clock and fuel gauge. It is also the first Honda scooter in India to get a tachometer. Above the instruments, the Grazia gets what Honda calls a “3-step eco speed indicator” which informs you whether you’re riding economically or not - similar to the eco mode you see on some other scooters. The instrument console is well laid out and the blue backlight looks cool once the sun sets. The seat can be opened via a switch placed next to the keyhole. And when you do, you get 18-litres of storage space. However, we do wish it featured a boot light. There is also a small glovebox at the front with an optional 12V socket for charging your phone, but the quality of the glove box cover feels flimsy.

The Suzuki Access gets a semi-digital instrument unit, but the small display screen makes it a bit difficult read on the move. The seat can be unlocked conveniently through the ignition keyhole which is a useful feature. There’s also a cubby hole under the choke knob which is deep enough to hold a 1-litre water bottle. Switchgear quality of both the scooters is par for the course, and neither does anything exceptional in this department. That said, the brake lock mechanism on the Grazia is rather tedious and requires both hands to engage while that on the Access is much simpler to use.

The Access has a tall handlebar which means it does not hit your knees while negotiating tight turns, while on the Grazia, it does. Both scooters offer a generous amount of space on their footboards and while both seats are well sized, we felt that the cushioning on the Grazia was a bit too soft. An optional mobile charger is located next to the cubby hole on the Access, but isn’t an enclosed unit like the Grazia. So there is a possibility of your phone “popping out” when you ride over potholes. With 21 litres of underseat storage, the Access clearly outdoes the Grazia here. That said, both scooters can only accommodate a half-face helmet. Another feature that both these 125cc scooters miss out on is external fuel filler caps. As you can see with respect to features, both the scooters are pretty similar. Though we’d have to give practicality points to the Access, it’s the Grazia that holds a slight edge owing to its funky instrument console and LED headlamp.

Both the scooters employ the same recipe when it comes to their engines - a single-cylinder air-cooled motor. Power figures are almost similar at 8.7PS and 10.2Nm for the Access while 8.6PS and 10.54Nm for the Honda scooter. And talking about weight, the Access is the lighter scooter of the duo at 102kg as compared to the Grazia’s 107kg.

So which one is faster? My gut feeling told me it was going to be the Suzuki Access but, the V-box had a different story to tell. The Grazia finished the 0-60kmph sprint in 9.03 seconds as opposed to 9.20 seconds for the Suzuki. And if that wasn’t it, the Grazia pipped the Access by 1kmph to reach a top speed of 90kmph in our test runs. But, in roll-on times, the Suzuki was faster by more than half-a-second in our 20-80kmph run, which will certainly prove useful while overtaking.

Coming to refinement, it’s the Honda Grazia that wins this battle, but only by a narrow margin. The Honda’s motor feels a little rough when rolling on the throttle, but smoothens out drastically once in motion. The Suzuki’s engine sounds gruff throughout, and that can feel a bit bothersome over time. Both the scooters manage to cruise at speeds around 60 to 70kmph rather easily. However, above these speeds, the Grazia starts to feel a bit strained, whereas the Access does not.

Mileage is among the most important factors for scooter buyers in India. In our fuel efficiency test, it was the Access which turned out to be more frugal as it returned us 51.1kmpl in the city and 52.7kmpl on the highway. The Honda on the other hand delivered 46.7kmpl in city which improved to 48.4kmpl during our highway run. Also, the Access has a larger tank capacity at 5.6 litres as opposed to 5.3 litres of the Grazia which means it will have better range too.

Both the scooters employ telescopic front forks and a monoshock at the back and we felt it was the Access that offered a plusher ride as the Grazia’s rear suspension is sprung on the stiffer side. It’s the same story when it comes to handling as the Access tipped into corners better and it felt nimbler in city traffic too, but only just.

Braking hardware is also similar - a disc brake up front and drum at the rear. The Grazia gets the benefit of CBS. However, one has to really go hard on the lever for the brakes to kick-in and in real world conditions the brakes on the Suzuki felt more progressive and offered sharp bite as well. In our 60-0kmph brake test, the Honda Grazia came to a standstill in 2.32 seconds and 18.03m, while the Access 125 took 2.57 seconds and 20.44m.

By now you would have figured out that both these scooters are pretty neck-to-neck. Before proceeding further let’s get the money part out of the way, the Honda Grazia retails for Rs 62,269 while the Suzuki Access 125 has been priced at Rs 57,744 (both prices are ex-showroom, Delhi).

As you can see the Access is Rs 4,500 cheaper than the Honda which is not a small amount by any means. The Suzuki Access still remains a very likeable scooter with its comfortable ride, frugal engine and agility which makes it a worthwhile option for the mature buyers.

But the Honda Grazia isn’t far behind in the above mentioned aspects and offers more features and better performance, while being more refined too. Also, the sporty styling is something that will be appreciated by youngsters, and for all that, just by the narrowest of margins, we’d pick the Grazia as the best 125cc scooter on sale!