We see if Ford’s iconic Mustang takes to the Indian highways better than it does to the world class race track where we drove it first. So we headed to Hyderabad to see if the big muscle can justify the GT suffix in its name 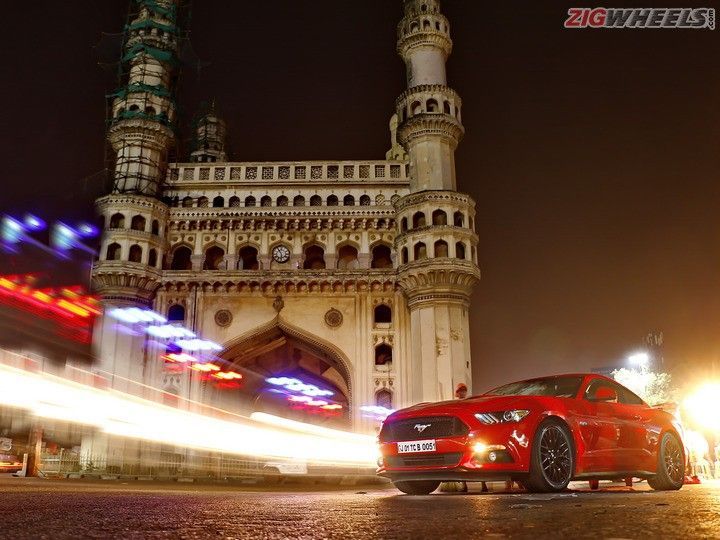 The caffeine hadn’t yet kicked in, even after consuming two good cups of coffee. It was 05:00am on a cold winter morning and my colleague Vikrant, responsible for the photographs you see here, was occupied with his intermittent naps as we made our way to the city’s most iconic monument, the Char Minar. Despite Hyderabad’s unevenly paved roads, Vikrant seemed to be blissfully ignorant of the world around him and especially the car he was in. The only conclusion to be drawn was that despite its muscle car status, the Ford Mustang GT actually rode quite well on uneven surfaces thanks to its fully independent suspension setup (first time ever in a Mustang). As we reached our shoot location I sounded the wake up call with the extension of my right foot. That woke us up properly as the 5.0-litre V8 erupted into an angry rumble. From the crowds that gathered shortly afterwards looking for the source of the bellow, it seemed we had woken up half the city as well.

It was a sight to behold. The bright red Mustang propped perfectly against the backdrop of the glorious Char Minar, a crowd gathered at 05:00am, eyeing the muscle car incredulously and not leaving a single corner un-photographed. It is a no brainer that the Mustang is one of the biggest icons of the automotive industry and a head turner. But the sheer amount of attention it gathers begs belief. The long bonnet, gaping front grille, the fastback rear and the galloping mustang gets noticed by everyone and everywhere. This was constantly reaffirmed to us throughout our 312km journey to Vijaywada. We made our way through the city and onto the Hyderabad-Vijaywada expressway, a never ending expanse of seemingly smooth tarmac and six lanes. The Ford crew in the back up car instructed us to go at a pace we were comfortable with . So we immediately dropped a couple of gears and sped off. It didn’t take a beat longer than five seconds for the backup car to become a speck in the Mustang’s rear view mirror and disappear completely.

When you have a performance car with a 5.0-litre V8 you expect it to have top end performance. But the Mustang with its strong mid-range torque, 515Nm to be precise offers that typical, laid-back American GT feel. Hence, we left the car in ‘D’ mode and it sorted out most of the things by itself. A strong mid-range also translated to lesser downshifts, sometimes even during overtaking. And while people all around us, regardless of what they were in craned their necks to get a glimpse of the Mustang as it roared past them as the tacho nudged 7000rpm. We were also thankful that while Ford has downsized and turbocharged its engines, the Mustang in India gets the old school naturally aspirated V8. And in all honesty, the V8 is as much an icon as the car it powers.

At around the halfway point we stride onto a winding section of road, and find my next opportunity to put a halt to Vikrant’s snoring, which had resumed shortly after we left Hyderabad. The 6-speed automatic gearbox was shifted to ‘Sport’ as was the steering setting. The throttle response became sharper, the brakes became instantaneously more responsive and the exhaust note became even louder (insert big smile here). I pulled the left paddle-shifter, dabbed the brakes and floored the throttle. The look on Vikrant’s face was one of pure disbelief (wide eyed and all) as all of the 401 horses and 515 torques made their way to the rear wheels and onto the tarmac. He looked like someone had taken him off his comfortable bed and strapped him directly onto a supersonic jet.

In the corners, the Mustang felt surefooted and planted. The balanced suspension setup helps absorb mid corner undulations with ease. The well weighed and direct steering provided plenty of feedback and the Brembo brakes felt well tuned and responsive. The only thing that felt a little out of sync was the 6-speed automatic transmission. The upshifts were smooth and quick but there was a slight delay in the downshifts. Also, double downshifts tended to be especially jerky which was its way of telling us that it didn’t like being pushed. The car feels comfortable and surefooted at speed but get too aggressive with the gearshifts or the throttle and it starts to bite back. Simply put, you cannot treat it like the Porsche Cayman and expect it behave itself, unless you are a drift king and wrestle heavyweight V8s into submission for a living.

The winding section ended and the car was back in civilised mode. We had done about 200km at this point and I was waiting for the car to start feeling uncomfortable. But it never did. The seats were comfortable throughout and provided plenty of back and side support. Even after almost 250km of constant driving I did not feel I needed a break. The cabin of the Mustang is well laid out and a nice place to be. The touchscreen infotainment system and the plethora of buttons on the steering though, do take some time getting used to. There is a fair amount of leather on the dash but the hard plastic on the door panels feels out of place. But, the cooled seats and the SYNC infotainment system coupled with Shaker sound ensured our time in the car was quite enjoyable.

The comfort is also down to the ride which was almost sublime on the highway. It can tackle 200kmph with ease and never once feels like it's about to leave the ground even over the bigger bumps. The 137mm of ground clearance is low, but still proved to be ample for the speed humps the road could throw at us. The ‘Stang is probably one of the best suited performance cars for our country and also completely justifies the GT suffix.  The biggest testament to that however has to be Vikrant, who had peacefully dozed off yet again.

It was only when we reached Vijaywada that we realised just how big the Mustang really is. On the highway it felt completely at home weaving through traffic and accelerating out of tight spots. But here, confined to the limits of the city, it suddenly felt a bit too big. Though, the view through the front windscreen is ample you can’t see the end of the bonnet because it’s just too long. The view in the left side ORVM is quite restricted and the biker population of the city made us feel even more hemmed in. The attention grabbing form and the V8 rumble weren’t helping matters either. Plus, the weighty steering which was a boon on the highway suddenly felt too cumbersome for the packed city roads, especially when negotiating three point turns. It was only when we reached our hotel that we heaved a sigh of relief.

It had been quite a day and the Mustang had been quite a surprise. The Mustang we knew was not an out and out track car, yes it can be made into one but inherently it is built to ride into the sunset, not post ridiculous track times. In the real Indian conditions the Mustang felt quite at home, it even returned a mileage of nearly 8.0kmpl by the end of our journey And we had been having a bit of fun along the way.We could have easily driven another 300km without ever tiring of the car or the drive. Even Vikrant agreed that he would’ve rather been in the car than on the plush bed he slept on the night before. While we think the Mustang is worth every Rupee of its Rs 65,00,000 ex-showroom price tag, we’d spend it be behind the wheel of. Out there, on the open and winding roads, the Mustang proved to be relaxed, capable, quick and fun enough when we wanted it to be. If you want the quintessential GT experience, this is it.