Audi India is set to launch the new generation A4 in India. Here's what it feels like to drive on Indian roads 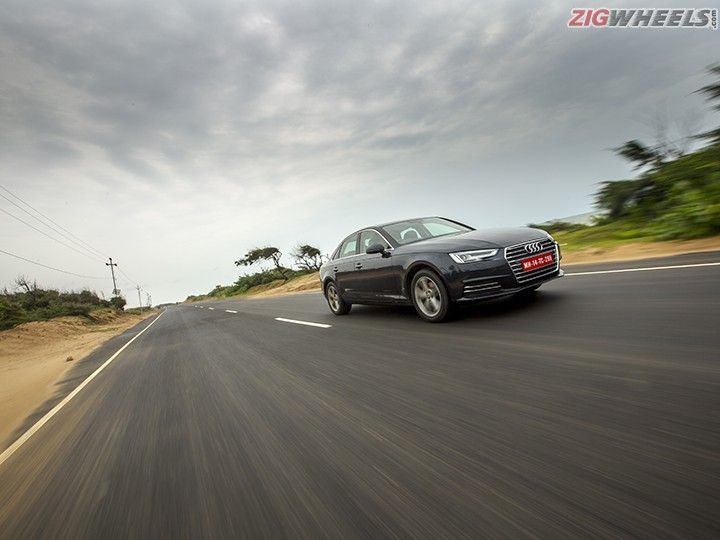 Audi was the last of the German trinity to set shop in India, but has been quick to become one of the top luxury car brands with its aggressive product strategies. Despite launches across the ever widening luxury car spectrum the A4 has been its most popular sedan, and also the car the Audi brand is the most synonymous with in India. The last generation of the A4 was around for a little too long, though timely updates ensured it didn't feel dated, well, visually at least. The new generation A4 broke cover internationally last year, and with its India launch around the corner we thought driving it on Indian soil would be a good idea, having driven it in Germany earlier.

Update: The Audi A4 has been launched with prices starting from Rs 38.1 lakh ex-showroom Delhi. We recently drove the car extensively. Here is the  Audi A4 30 TFSI Road Test Video Review

A lot has been said about how the new A4's design is more of an evolution of the previous generation car's design. But then, Audi is known to not change its designs radically across generations. The new car looks familiar, yet has the sense of newness you would associate with a new generation model. The car looks wider, the look accentuated further thanks to the wider grille. Headlights are sharper and more aggressive with fangs on the insides. The outside rear view mirrors are mounted directly onto the doors, and there's a sharp crease on the shoulders to add more character, though the silhouette from the side reminds of the older car. The rear is different thanks to the new tail lights and slightly pronounced lip at the top of the boot lid. The new A4 also gets Audi’s dynamic turn indicators, which have the LEDs swiping in the direction of the turn.

There's a lot more differentiation inside too, and the dashboard design in fact looks a lot like the new Q7’s. The design is also more driver-centric now. What takes the cake though is the brilliant 12.3-inch digital display that has replaced the conventional dials behind the steering wheel. You get a large speedometer and tachometer at either end of the screen along with a whole lot of information in the centre. You can switch views to see information like average efficiency, tank range and the like or the music or maps for navigation. The latter is my favourite, since you get directions on a big screen right behind the wheel and don't need to look away towards the centre console.

The dashboard has a wooden strip running across it, above which sit the air-conditioning vents. The vents are interspersed by a design that looks as if the air-con vents run from end to end of the dashboard, again borrowed from the Q7. The 7-inch display screen on top of the centre console is a fixed unit though it appears like a pop-up. The new A4 also gets the latest generation Audi MMI, which packs in more features than before. Its controls are newer and smarter, and are easier to use on the go. Then of course, the new A4 comes equipped with Android Auto and Apple CarPlay both. The front armrest features two USB slots and an AUX port, apart from which the glove box has two SD card slots and one SIM card slot which means connectivity options are aplenty, be it for music or Wi-Fi internet.

The A4 also gets a wireless phone charging dock under the front arm rest. Switches look classier, and are touch sensitive which means unless you want to change the air-conditioning settings you don’t need to push the switches, a mere touch will give you information. The drive selector lever is now the yatch-like unit we’ve seen on the A8, and adds to the more premium feel. There’s so much on offer I could literally write an article on just the features of the new A4, but I’ll save that for another day. The surprise highlight has to be the new engine. As if the fact that Audi will launch the new A4 with only a petrol engine for now wasn’t surprising enough, the German car maker has surprised us with the engine itself.

Powering the new A4 for now will be a four-cylinder 1.4-litre turbocharged petrol engine, the smallest ever for an Audi in India. Audi tells us the engine has been revised thoroughly and is a lot more powerful and refined. The 1.8-litre TFSI motor has been given the boot, and the 1.4-litre motor will replace it. Surprised? Don’t be. I had my doubts initially too, but after the drive I was convinced the smaller engine makes sense. Some numbers first. The engine offers 150PS and 250Nm of torque, which Audi claims will propel the car to 100kmph in 8.5 seconds. For the record, the older engine offered 160PS, accelerated to 100kmph in 8.6 seconds.

The new car is also 95kg lighter thanks to the extensive use of aluminium.  Well, that’s not the highlight though. The highlight is Audi’s claim of 17.84kmpl as compared to the older car’s 12.48kmpl! That’s a huge gain, and over the course of my drive I realised that if driven sanely, the car could easily return double digit figures. The new A4 continues to offer Audi's Drive Select that lets you choose between four driving modes, Comfort, Auto, Dynamic and Individual. The driving modes alter engine and gearbox performance, but not the suspension or handling.

Dynamic is what I stuck to, as it was the most interesting and fun to drive with sharper responses from the engine and gearbox. At full chat the gearbox is a tad slow to respond to inputs from the paddle shift levers but when driving in a relaxed manner at low to mid revs the gearbox was quicker to swap cogs. Engine response is quick, and despite being turbocharged power delivery is linear enough to feel like a naturally aspirated motor. The fact that the engine is superbly refined has made its torque curve flat, which has made it slightly boring to drive, but for most owners that’s not a bad thing at all.

The engine offers brisk performance. There’s no edge of the seat action here though, neither will your eyes widen when you put pedal to metal. But there’s good grunt all through, except for when you hit the top of the revband. That’s where the engine seems to run out of breath, especially once you cross 5000rpm. That said, the new A4 is perfectly at ease being driven in a relaxed manner, and an indicated 120kmph will have the motor spinning at a mere 2000rpm, in seventh gear. That’s the engine, what’s also interesting is the car’s demeanour on the whole when driven fast. It remains calm and composed even when you’re switching lanes violently, with a planted feel. The suspension does a good job of soaking in bumps, and ride quality is impressive.

For the chauffeur driven, there’s legroom at the rear. Even with my near six foot frame in the front seat there was ample space behind. What’s more, the front wheel drive configuration has helped eliminate the transmission tunnel, which means seating three abreast in the rear seat is a comfortable affair. The steering could have offered more feedback, as at low speeds the steering wheel is pretty light, and it even weights up well as speeds go up, but it isn’t as communicative as I would have liked. Also, I was finding it a bit hard to find my favourite driving position – I kept fiddling with the motorised seat adjustments and the manual adjustments for the steering wheel but couldn’t really make myself feel at home.

But these little niggles barely affect the brilliant feel of the new A4. It feels set to challenge its competitors like the Mercedes-Benz C-Class, BMW 3 Series and the Jaguar XE. Audi has upped the game with the entire gamut of features and equipment, not to mention the 8 airbags and excellent sound insulation. Seats are plush and space is abundant though we would have preferred a full-sized tyre in the boot instead of the space saver. The car feels more premium than its predecessor in every respect, and we feel the pricing will be in line with that. Expect the new A4 to be more expensive than before, but prices should begin under the 40 lakh rupee mark for the base variant.