Alto vs Kwid vs S-Presso Off Road

India’s most popular small car defends a title it never asked to be bestowed with! 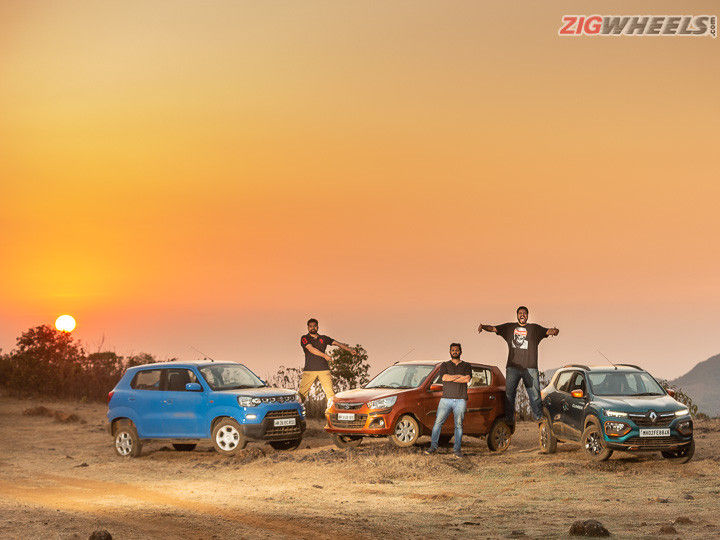 Word association, it’s something we do subconsciously. Think of noodles, and the mind immediately has a brand name flashing through it. You’re thinking of it right now, aren’t you? Well, when it comes to off-roading, the mind would traditionally associate it with SUVs. However, while the hairy chested heritage of SUVs has much to do with the popularity of their image today, most cars claiming to be SUVs would most likely soil themselves at the sight of a smidgen of muck.

More importantly, there’s a colossal gap between the tool and purpose. Think about it. The common man living in the challenging remote and hilly regions of India isn’t driving a Fortuner, Endeavour, Wrangler or a G-Wagen. The masses that have to drive through gravel, sump-smashing rocks, dust and inclines need something that’s easy to manoeuvre, light on the pocket and easy to mend too (service stations can be hours, if not days away).

And hence, thousands of people in these regions have been using cars like the Maruti Suzuki Alto. A small car with no claim or credentials for off-roading but has been quite the mountain goat since the turn of the century. Now, though, we’ve got the Renault Kwid and Maruti’s own S-Presso. Two cars that follow the Alto’s formula but have updated the equation with better ground clearance and more sophistication. These cars claim to carry the SUV mantle, but can they better the champ’s abilities?

To find out, we prepared a series of tests, the last of which, demanded an abject lack of mechanical sympathy from us. Oh, the guilt we’re feeling now!

The Candidates And Their Credentials

On paper, there’s little to separate the Alto K10, Kwid and S-Presso. They all come powered by 1.0-litre, 3-cylinder engines, produce 68PS and near as makes no difference 90Nm of torque. They also tip the scales between 750-780kg. Where the S-Presso & Kwid have an advantage is ground clearance.

The Long & Short Of It

This off-road challenge includes four tests where none of the cars will set foot on tarmac. Every car is driven by the same test driver for each challenge to ensure consistency in the driving style.

The winner will be declared based on the total points amassed. The tests get progressively tougher and indeed, weirder too! Each challenge tests a specific aspect of each car that makes it better from an off-roading perspective. And then, there’s one final challenge that tests the summation of all these aspects.

The first three tests offer three points for 1st place, two for 2nd place and one for 3rd place. The final test, though, doubles the points scorable for each rank i.e. 6,4 & 2. In every test, it’s the Alto that sets the target to beat.

(Drive downhill on a gravel+rock laden path with 1st gear engaged. No touching any of the floor pedals, especially the brake. The car that ends the test with the lowest recorded top speed gets the most points.)

Our satellite-linked speed recorder (VBOX) mounted to the Alto, we approach the steep start of the downhill path. Clutch released and feet pulled back, the car picks up pace quickly. The rocks below make the car violently bounce and toss about. Sitting in the co-driver’s seat, all you have at your disposal is trust in your tester’s abilities. The mind braces and hopes for the sensation of braking, but that’s off the cards until after the finish line.

Bear in mind, the trail is marginally wider than the car itself. The surrounding foliage makes contact with the car, making the drop even noisier and more dramatic. Finally, we reach the finish line and jam the brakes. The maximum speed recorded is 33.3kmph. Doesn’t sound like much, but on a path barely good enough to walk down, doing over 30kmph feels like a land speed record.

Up next is the Kwid, which goes down the trail while controlling the in-cabin drama slightly better. The highest speed clocked is 31.6kmph, nearly 2kmph slower than the Alto. Finally, the Alto’s cousin rushes down the slope and clocks in at 32.9kmph. A sliver slower than the Alto but good enough to lock 2nd place.

(Each car approaches the braking point at 40kmph. The smallest braking distance on gravel gets the most points.)

The Alto K10 was recently updated with features like ABS with EBD and a driver airbag. However, the car used for our test was from an older lot and did not have anti-lock brakes. Now, this may be a disadvantage on tarmac but on gravel, we felt it would do better. On gravel, the wheels lock causing the momentum and weight of the car to dig into the ground below. This, in turn, would slow the car down quicker. Sure enough, that’s exactly what happened.

While the ABS equipped S-Presso and Kwid stopped within inches of each other, with the S-Presso stopping earlier, the Alto stopped nearly half a car length earlier. The Alto redeems itself and rolls off with the most points in this test.

Test 3: Mirror Mirror On The Wall, Who’s The Smoothest Of Them All (Ride Quality Test)

(The test driver drives up to 40kmph, at which point, the co-driver attempts to get a clean draw in a game of connecting the dots. The cleanest draw gets the most points.)

Our test driver speeds up to 40kmph on our mini rally stage. All the while, I stay ready with the test drawing in hand. Once the speed is reached, he gives me the go ahead and I try my best to connect the dots and carve out the perfect dolphin.The gravel filled test route is littered with sharp rocks and bends alike. The terrain and speed make it very difficult to hold a steady hand for this game, which is rated for three-year-olds.

At the end, it’s the Alto that gets the cleanest draw, followed by the Kwid and S-Presso. While I wouldn’t say the Alto’s ride is particularly more comfortable than in the others, it rides lower i.e. there’s less roll through the turns and not as much suspension travel/bounce.

Test 4: All Or Nothing (The Hill-Climb)

(Each car drives up the same rocky/gravelly hill that they drove down for the engine braking test. Only this time, they’re loaded with the driver and three others! The car that reaches the finish quickest gets the most points.)

This is our most daunting test yet. Essentially, we drive on the same path where the engine braking test was carried out. The only difference? This time, it’s uphill. And yep, it’s with four adults on board.

As always, the Alto goes first and we have a good feeling. While the jagged rocks are scary obstacles, the K10’s 1.0-litre engine (same as the S-Presso’s) is known for its low-mid range punch and happy to rev nature. It’s a fun-to-drive car and has the right heart for challenges like this.

With the car loaded up with more than half its kerb weight in humans, we’re hard off the start line and are quickly scampering uphill. The loose stones create an ungodly racket in the wheel wells but the car keeps climbing on. But as the slope gets steeper, the Alto can’t find the grip to keep going. We push on and with the rev needle bouncing off the limiter, finally cross the finish line in 29.03 seconds. An impressive time, but is it enough?

Nope, it is immediately bettered by the Renault Kwid. Not only was the Kwid 3.78 seconds quicker than the Alto, it also felt more comfortable doing it. The bumps on the way certainly didn’t make the cabin feel like a luxury suite but the suspension handles the sharp edges with far more maturity. That said, we do believe the Alto has the superior engine. In fact, in our pre-qualifying test runs, the Kwid actually overheated on this stretch. The Kwid’s longer suspension travel helped it bounce ahead through points where the Alto struggled. Combine the better motor with a more suitable suspension than the Alto’s, and you get the S-Presso.

The Alto put up a commendable fight, winning 2/4 tests in the challenge. However, it’s the Maruti Suzuki S-Presso that goes home with the winnings thanks to its performance in the hill-climb which carries the most weightage.

Through this challenge, we’ve learnt why so many people use Altos in the semi-urban and hilly parts of India. While there’s nothing SUV about it, it has some characteristics (light kerb weight & sprightly engine) that make it do well on surfaces it isn’t meant for.

However, the S-Presso and Kwid do well to one up those credentials. While their appeal largely lies in the SUV styling, they do offer something extra to make them do better than the original but unwitting champion of the cause.