Till the new C63 AMG comes to India, the BMW M3 sits in a sweet spot where it has got no competition. If you want this racy compact sports sedan then, and you don’t have a choice, should you buy one? And if you do, what will it feel like? Here's our take 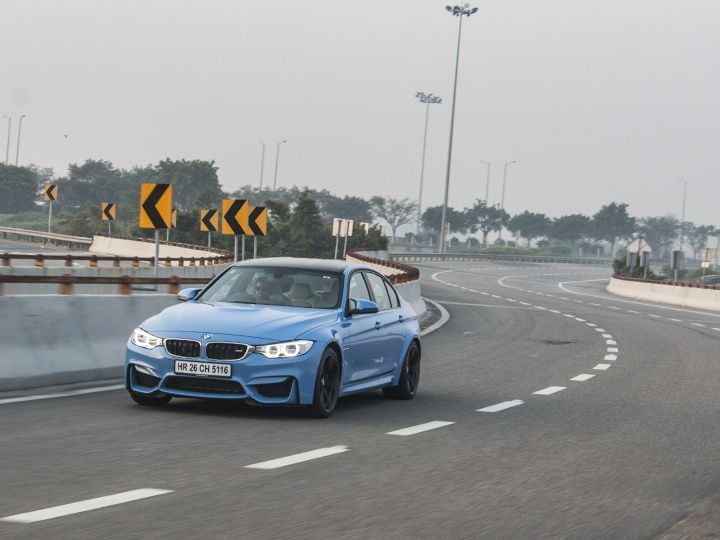 I’m glad for the fact that the sedan retains the M3 moniker while the coupe is badged the M4. BMW’s M division has done the world a great deal of good by introducing us to the M3, the perfect driving machine for the BMW fan - fast, agile, compact and aggressive in equal measure. It’s the sedan, to my eyes, that feels better proportioned and more desirable of the two and so the M3 would be my pick over an M4. Now that this is settled (you can disagree of course), let’s take a closer look.

The 3 Series is a family sedan that BMW purists will agree has gone soft. It however is the donor car for the M3, and in the M3’s fifth generation, M division has performed an expansive design job to give this car its distinct identity. It looks a lot more hard-edged than its predecessors, even when standing still, the fangs on the sides of the front bumper to the eye-lids above the air dams, it all looks like a butcher’s knife meant to cut through air with one swift slice. Then there’s the power bulge on the bonnet, visible from the driver’s seat and reminding you of its racy intentions.

You will also love the wing mirrors, shaped to provide very little resistance to air and the set of black aggressive twin five-spoke alloys on those 19 inch wheels. The M3 we drove came with 255/35 R19 fronts and 275/35 R19 rears, ridiculously low profile but rather sexy looking pair of shoes. We recommend you stick to the stock 40 profile 18 inchers for a more comfortable ride. More on that in the ride and handling section.

The rear bumper carries on with the fang theme, and looks delectable from a low angle with the two double barrel exhaust tips in full view. These have been at the receiving end of a lot of flak for what used to be an enchanting note when spitting out exhausts from the V8 in its predecessor but don’t sound as natural with the new twin turbo in-line six. They look fantastic however. We also like the understated lip spoiler on the boot and the carbon fiber roof, the latter a first for the M3 sedan. If I’d have to nitpick, I was a bit badgered by the excessive M division branding all around the car. If you suffer a memory loss, and forgot the English language in the process, you will not forget the letter M and the number 3.

Unlike the menacing exterior, the interior is fairly docile but a familiar place. The driver focused cabin, neatly laid dashboard with no flashy element and top quality materials all around are things you will notice first. But it’s an M3, not a 3 Series, so you get the M Sport bucket seats that you will begin to appreciate the faster you go and the harder you take corners. The woven carbon fiber elements on the dashboard get the right amount of glow as you chase the sunrise, and light grey leather upholstery holds a nice contrast to the dark cabin materials. The M leather wrapped steering wheel feels fantastic to hold and the M colour stitching on the inside of the wheel is a fine touch. Four passengers can sit in excellent comfort… when the driver isn’t wringing the motor that is.

The M3 is also a practical car with higher profile tyres than the one our car came with. Besides four doors and the space for four adults, there’s a 480 litre boot. The rear seats split 60:40 and fold flat to open up even more storage. The 120mm of ground clearance however is a bit of worry if you’d plan to take it everywhere. It’s can’t be your everyday car for sure in India if your route has a few demon speed bumps along the way.

It’s all about the driver’s seat in the M3. Once you are firmly strapped in and driving, it’s the features that change the character of the car that you will need most. Since it’s a properly fast car, the heads up display is the best feature you can have. It displays everything from speed to navigation to even your gearshift indicator, that comes in handy when you are banging in redline shifts. There’s a large optional 8.8 inch navigation screen on top that also displays feed from the various optional camera angles – front, sides and top – rear is standard. Near the gear lever are the ‘magic buttons’ that alter the M3’s characteristics (we’ll elaborate on them in the driving bits).

Adaptive LED headlights, two zone climate control, ambient lighting in the cabin and app connectivity under the Connected drive platform that lets you record your driving behavior from your iPhone. Auto start-stop and Brake energy regeneration try frantically to save a few precious drops of high octane fuel. Safety features include driver, passenger, knee, head and side airbags, ABS with brake assist, Cornering Brake Control that distributes braking force while cornering, DSC and M Dynamic Mode that offers a certain level of slip before the DSC intervenes. Then there is a optional equipment list you will want to splurge into but will drive up the price. The carbon fibre interior trim and black chrome inserts are an add-on, about eight different varieties of leather interior upholstery and the 19 inch wheels are optional extras. The 16 speaker Harman Kardon system is optional as well, so while the stock M3 will cost you Rs 1.2 crore ex-showroom Delhi, expect it to be a whole lot dearer on the wallet.

Turbos kill the engine note alright but they do make cars go a whole lot faster past the lag phase. In case of the M3, while the former is true, there is absolutely no turbo lag I can talk of. Sustained acceleration from idle to 7,300rpm when you upshift, the new 3.0-litre twin-turbo inline six mill will surprise you with the levels of performance it offers. You get 437PS at a high 5,500-7,300rpm band to play with, and crucially, 550Nm between 1,850-5,500rpm, a massive 40 percent more than its predecessor. The M3/M4 are about 0.2 seconds quicker to the ton than their larger siblings with the 4.4-litre twin turbo V8s. Light-weighting surely is the replacement for displacement, as is a bunch of cleverly engineered turbos.

M Division’s way around the lag is to keep the single-scroll turbos at half spool in anticipation of the performance requirement, negating that lag phase. Torque as a result is linear and relentless all the way up to 5,500 rpm. It’s when you think that the performance is going to taper down that it gets stronger and quicker, demanding a higher gear. You need to up the gearbox settings and the throttle map to sport to get the best out of the 7-speed M-DCT gearbox. The shifts are quicker than you can fathom and a redline shift keeps you at the peak of the powerband in every gear to gain speed north of a 100kmph like there is absolutely no mass to lug or wind to resist.

The M3 is also a precise track tool, and if you haven’t read our track review yet, you must here

The M3 is the kind of car you get into and instantaneously feel like you belong there. Dumb the throttle maps and the gearbox to its least alert setting and the M3 is no more difficult to drive in traffic than a 3 Series. The ergonomics are spot on and the car just feels so well wrapped around you to negotiate traffic. The engine purrs lightly and the exhaust stays quiet as you amble around town. Keep the suspension in Comfort mode even if you are stepping on the gas when you are hustling your way through because Sport mode requires a silky smooth surface. Don’t even bother with Sport Plus.

The steering too offers three settings like the suspension. Sport Plus is direct and precise and painful over a period of time. The Sport setting keeps it just perfect but you could lighten up responses in Comfort for most of the time. In addition to these settings for the gearbox, throttle map, steering and suspension, you get M Dynamic mode.

Driving dynamics is the M3’s USP and keeping all the systems on, you will enjoy a really fast M car carving up corners faster than a RWD sportscar is meant to. But it’s as much about fun as it is about being fast. The M3’s active M differential ensures that, with the DSC either turned completely off or in M Dynamic mode you can flatter the drifter in you. The latter is the friendlier one for the enthusiast with a little less skill to catch that powerslide. The DSC allows some slip, intervenes when the slip turns closer to a spin and could be good fun on a winding road. The grip from the Michelins is as good as they come and the brakes are progressive and offer carnivorous bite on a hearty meal of tarmac.

The bother of economy is the frequent visits to the fuel station and not the speed at which the car sips fuel. Official figures stand at 10.75kmpl but a proper workout for the six cylinders returned us about 3.8kmpl. You’d get somewhere in between this range but if you care, it’s not the car for you. As for the price, the M3 costs 1.2 crore ex-showroom Delhi without a bunch of optional extras featured on our test car. It is surely on the expensive side as all M cars are, compared to say the RS and AMG lines from Audi and Mercedes.

But buying an M3 isn’t about the price right now for there is no competition till the new C63 AMG is introduced. And even when it is, unless your best friend buys the latter and challenges you to a track duel, you’d be more than happy in the M3. It is a special car even without a thunderous engine note, could shame a few AWD cars with its corner carving prowess and can do duties of a family car if need be. The M3 is the car for the young, rich, quintessential petrol head family man.