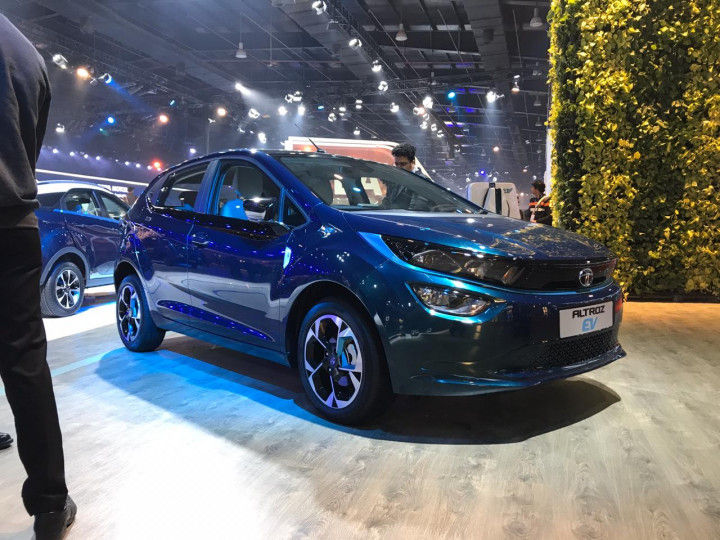 Tata Motors’ showcased a total of seven cars, including BS6 models, at Auto Expo. Amongst these vehicles was the all-electric iteration of the Altroz hatchback that was launched back in January 22. It had first made its debut in concept form at the 2019 Geneva Motor Show, and now the near-production spec vehicle has finally made its presence.

Since this is the electric version of the Altroz, its no surprise that it looks nearly identical. It is based on the ALFA Arc (Agile, Light, Flexible and Advanced) platform. Exterior bits that have been carried over include the rear end that features split LED tail lamps connected by a black plastic trim. However, there are a few distinct bits from its ICE counterpart such as a tweaked front end and a different set of alloy wheels.

The similarities in the Altroz EV continue on the inside with a similar dashboard design. Feature highlights include a 7-inch touchscreen infotainment system with Android Auto and Apple CarPlay, connected car tech, Harman sound system, ambient lighting, cruise control and a coloured multi-info display. Safety features consist of dual airbags, ABS + EBD, rear parking sensors, a rearview camera, high-speed alert and driver and co-driver seatbelt warning. In place of the gear lever in the ICE version, the Altroz gets a centre armrest-mounted rotary control for the driving modes.

Under the hood, it is powered by the Ziptron powertrain, which made its debut in the Nexon EV. It draws from an IP67-rated dust- and water-proof battery pack which delivers a driving range of 300km on a single charge.

It is likely that Tata Motors will launch the Altroz EV in India towards the end of 2020 with prices starting from Rs 14 lakh (ex-showroom, India). The standard Altroz competes against the likes of the Maruti Suzuki Baleno, Toyota Glanza, Hyundai Elite i20, and Honda Jazz.