Renault Kwid Facelift vs Maruti Suzuki S-Presso: Which Mini-Cross Hatch Should You Buy?

The S-Presso and Kwid have arrived right on time for the festive season. So let’s find out which one deserves your attention 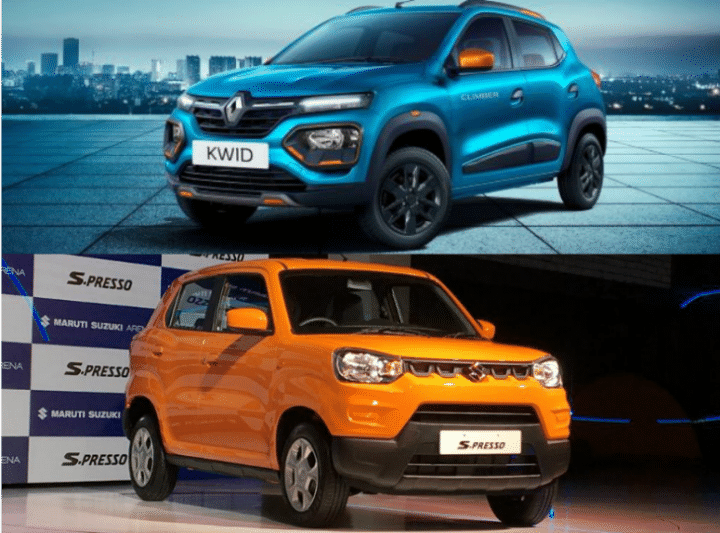 Just a day after the launch of the much-anticipated Maruti Suzuki S-Presso, Renault has officially debuted the Kwid facelift. The Kwid facelift comes with premium looks, bigger dimensions and packs more features as well. So does that make a strong case for the baby Renault? The only way to find out is by pitching both models against each other in an on-paper comparison.

While the Kwid misses out on steering-mounted audio controls, it packs premium elements like LED DRLs and tail lamps. It also gets optional rear power windows as well. Meanwhile, the S-Presso misses out on a tachometer.

Safety features on both models include a driver side airbag, ABS with EBD, rear parking sensors, driver and co-driver seat belt warning as well a high-speed alert. The S-Presso also packs a passenger airbag in the top-spec VXi+ variant while it is an option in the Kwid. However, the Renault Kwid is the only car to come with a rearview camera.

Both models displace power from a 1.0-litre 3-cylinder petrol unit that develop similar power and torque figures. However, the Kwid’s engine produces its peak torque at a high 4250rpm while the S-Presso’s unit does it at a more relaxed 3500rpm. Both models come mated to a 5-speed manual or an AMT. Special credit must be given to the S-Presso though as it comes with a BS6-compliant engine.

The Renault Kwid can also be had with an entry-level 0.8-litre engine. It develops 54PS of power and 72Nm of torque, mated to a 5-speed manual gearbox.

Prices for the 1.0-litre Renault Kwid start from Rs 4.33 lakh, which makes it Rs 64,000 more expensive than the S-Presso. However, the 1.0-litre engine in the Kwid is only available in the higher-spec, and consequently pricier, RXT and Climber variants. Tilting things towards the Kwid is the top-spec Climber AMT that is cheaper than the S-Presso’s VXi+ AMT variant by Rs 7,000, making it a good value for money offering. That said, if it’s a lower-spec variant that you’re looking for, the S-Presso seems like a better option thanks to its bigger engine when compared to the base-spec Kwid.