2021 Toyota Fortuner vs Rivals: Will The Facelifted SUV Pick Up Where Its Predecessor Left Off?

The established full-size SUV is now accompanied by a sportier Legender variant and will resume its rivalry with the Endeavour, Alturas G4, and the newly launched Gloster 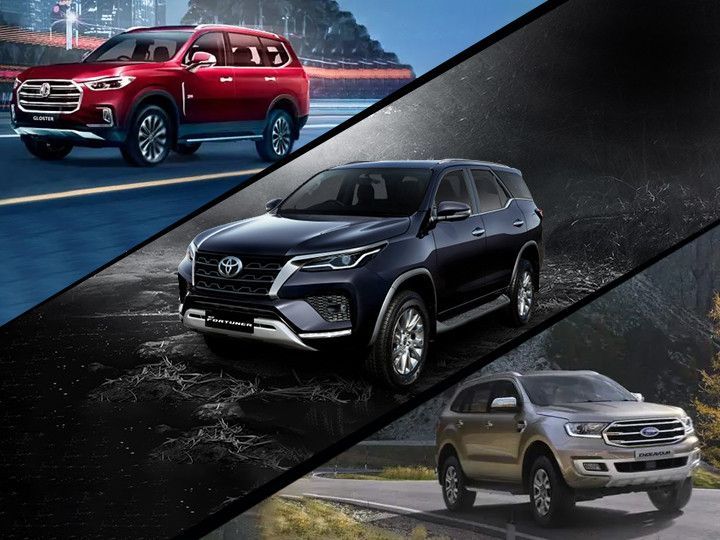 Toyota has launched the facelifted Fortuner and it's more sporty and premium variant, the Legender. Aside from cosmetic upgrades, it gets the same engines, with the diesel packing more punch than it did before.

For the longest time, the Fortuner went head to head with the Ford Endeavour in a closely contested rivalry. With the Mahindra Alturas G4 and the recently launched MG Gloster thrown into the ring, how does the new Fortuner fare against the three? Take a look.

The Bigger They Are…

…..the more fun it gets when it comes to full-size SUVs. While the Gloster is the longest, the Alturas G4 is the widest of the four, with the Endeavour being the tallest. The Fortuner might not be the longest, the tallest, or the widest in comparison to its rivals, but it manages to stand out from the rest of the crowd thanks to its road presence. If that’s not enough, there’s always the Legender variant for a little more eye-candy despite it measuring the same as the standard model.

Change For The Better?

The diesel engine of the Fortuner may not have changed in terms of displacement, but don’t judge a book by its cover. The new engine now puts out 204PS and 500Nm, an extra punch of 27PS and up to 80Nm over the outgoing model. However, torque output for the manual variant is limited to 420Nm, which is the same as before. The increased grunt also takes it a notch above the Endeavour and Alturas G4, on paper. That being said, the Gloster’s twin-turbo unit is the most powerful, at 218PS.

In addition to the diesel motor, the facelifted Fortuner retains its 166PS 2.7-litre petrol engine which gets the option of a 5-speed manual and 6-speed automatic gearbox. This makes the Fortuner the only model in its segment to get a manual transmission option. These motors drive the rear wheels only. The diesel engine also gets a 6-speed MT and a four-wheel drivetrain option.

Like its rivals, the Fortuner gets features such as LED headlamps and LED DRLs. The facelift sees the addition of new features which were prominently missing from the SUV’s list. It has finally got Android Auto and Apple CarPlay connectivity and an 11-speaker JBL sound system (earlier it came with just six). However, the Fortuner still misses out on a sunroof, a popular feature offered with the SUVs in the segment.

The Fortuner gets all the safety features that are standard across the segment. This includes multiple airbags, ABS with EBD, and electronic stability control. However, unlike the MG Gloster, it misses out on level 1 autonomous driver assist. It doesn’t get parallel park assist, which is offered in the Gloster and long-term rival Ford Endeavour.

But At What Cost?

The Fortuner has always been heavy on the wallet but the facelifted version sees a premium of up to Rs 3 lakh over its predecessor. While the Fortuner is built to last a war, the pricing does make one scratch his head before signing the cheque.