Can the refreshed Polo fend off rivals from Maruti, Ford and Hyundai? Let’s find out 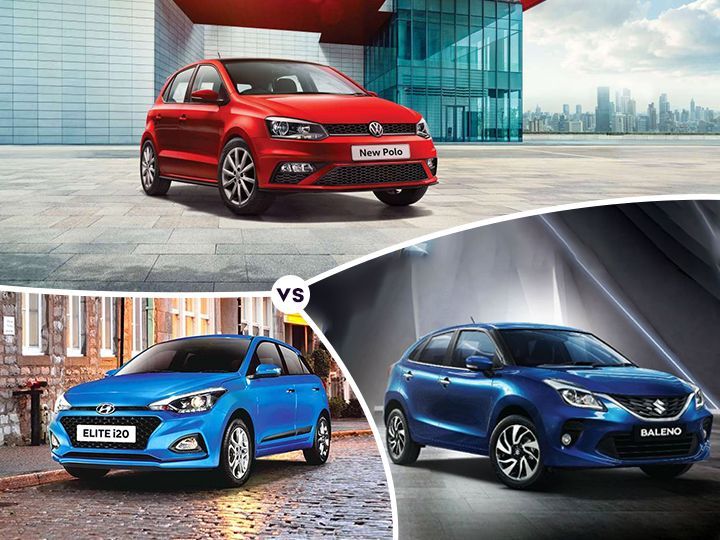 While the Volkswagen Polo has been a solid hatchback in the past, it has been showing some signs of age against newer and more modern rivals like the Maruti Suzuki Baleno and the Hyundai Elite 20. In an attempt to keep up, Volkswagen has launched the Polo facelift priced between Rs 5.82 lakh to Rs 9.88 lakh if you count the GT trim. While the changes  are only limited to its cosmetics, how does it fare in the uber competitive hatchback segment? Let’s find out.

The Volkswagen Polo facelift continues to be the smallest hatchback in its segment. The Maruti Suzuki Baleno is the longest (3971mm), widest (1682mm) and tallest (1510mm) among the three hatchbacks.

However, that advantage is held by the slimmest of margins as the Hyundai Elite i20 only falls behind the Baleno by an average of 5-10mm in length, width and height. The i20 does have an advantage in terms of wheelbase.

Under the hood, the high end trims of the Polo and the Baleno blitz the competition, but the Polo GT edges ahead in power (105PS) and torque (175Nm). If these variants aren’t counted, the Baleno Smart Hybrid variant is the most powerful(90PS) of the lot, while the standard Polo is the least powerful (75PS).

In terms of fuel economy, the Baleno and its RS trim streak ahead of the rest with efficiency figures above 20kmpl.  While the Polo GT has power, it comes at the cost of fuel efficiency, which at 17.21kmpl, is the least out of the three hatchbacks. It is closely followed by the Hyundai Elite i20 in its CVT trim at 17.4kmpl. However, the standard Polo is the only hatchback that is close to the Baleno with 18.78kmpl. In terms of transmissions on offer, all three hatchbacks come with a 5-speed manuals. however they differ in the automatic range. The Polo GT gets a slick shifting 7-speed DSG, while  the Baleno and the Elite i20 receive CVTs which are efficient but less fun to drive.

While the petrol powered hatchbacks are close in power, there are more differences when it comes to their diesel motors. The Polo GT leads the way in power (110PS) and torque (250Nm), but comes at a cost of being more of a gas guzzler (19.91kmpl). Interestingly, the standard Polo and the Elite i20 boast the same power figures (90PS), but the i20 is more frugal at 22.54kmpl compared to the 20.14kmpl in the Polo.

The Baleno’s 1.3-litre diesel has gone more for a frugal setup, sacrificing power (75PS) to give it better fuel efficiency at 27.39kmpl. All three diesel hatchbacks come with a 5-speed manual transmission.

All three hatchbacks are adequately equipped with features like a touchscreen infotainment system with Apple CarPlay and Android Auto connectivity. Other common features include automatic climate control, powered ORVMs with electric folding and keyless entry, cruise control as well as steering mounted audio controls. The Polo however, misses out on projector headlamps and DRLs that are present in the Baleno and Hyundai Elite i20. Push button stop/start is another feature exclusive to the Baleno and i20.

The Polo gets a slight advantage with cruise control, whereas the Elite i20 has an additional wireless charger option compared to the two hatchbacks. The Baleno scores in additional smartphone connectivity via its Smartplay infotainment system.

While all three hatchbacks get standard safety features like ABS, and rear parking sensors, the Hyundai Elite i20 goes a step further with six airbags in the top-spec Asta (O) variant. Both the Baleno and the Elite i20 also feature reverse assists and a rear parking camera which is not present in the Polo.

Sadly, the Volkswagen also misses out on ISOFIX child seat anchors which is present in the Baleno and the Elite i20.

In the end, if you are looking for a car with some serious juice under the hood, the Volkswagen Polo would be your best bet. However, it comes at a compromise of low fuel efficiency and less premium features at a higher cost. The Maruti Suzuki Baleno is the ideal pick if you are looking for a frugal car with modern gizmos. It offers the most banf gor your buck too. The Hyundai Elite i20 offers the best of both worlds, but with additional safety equipment. What would be your ideal pick? Let us know in the comments below.