Updated Datsun Go and Go+ Launched Ahead of Festive Season 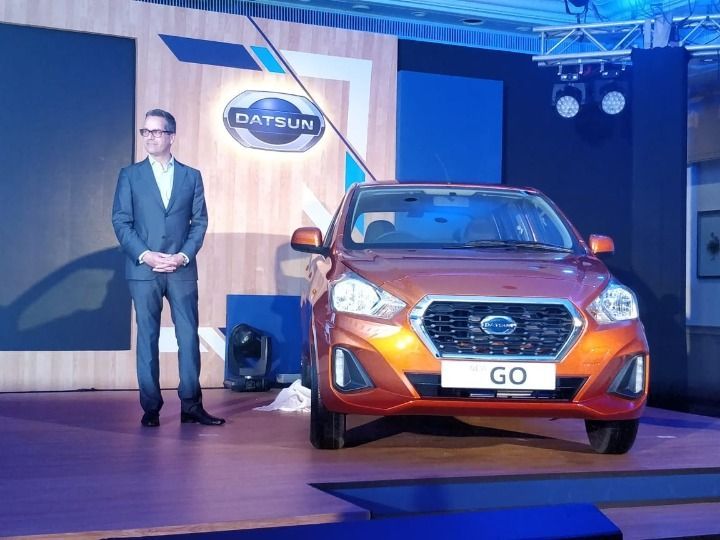 In a bid to enhance the appeal of the Go and Go+, Datsun has launched the two cars with a few cosmetic upgrades at a starting price of Rs 3.29 lakh and Rs 3.83 lakh (ex-showroom Delhi), respectively. Currently available for booking, the updated Datsun twins come right ahead of the festive season and bring a lot of goodies with them.

Among the changes, Datsun has announced two new colours called ‘Amber Orange’ and ‘Sandstone Brown’, accompanied by a revised front end with a sharper bumper and the all-important LED daytime running lamps. Another noticeable change comes in the form of 14-inch alloy wheels that replace the 13-inch steel wheels. Notably, the India-spec car doesn’t look any different from the facelift that debuted in Indonesia earlier this year.

Here is a detailed look at what the updated Datsun Twins have to offer.

Changes to the exterior design are limited to the front fascia, ORVMs and the wheels.
Both the Go and the Go+ feature a redesigned bumper and grille, both adding a bit of sportiness to the design. The bumpers also get noticeable vertically stacked LED DRLs.

The ORVM covers are also body coloured in the new Go and Go+, though limited to the top-of-the-line variants. Also limited to the top variants will be the new 14-inch alloy wheels instead of the older 13-inch steel wheels with full covers.

The bolder design theme continues on the inside too. Unlike the mostly beige-and-brown interior of the pre-facelift models, the new Go features all-black interiors with faux carbon-fibre inserts on the door pads and centre console, while Datsun has gone with dual tone, white and black finish inside for the Go+. Brushed aluminium plastic inserts also adorn the centre console, the gear console and the door handles.

The central AC vents are now rectangular-ish instead of circular, forcing the hazard warning button to move to the lower centre console near the gear console. The hazard warning switch is placed where the earlier car had its archaic pull-type handbrake, the new Datsun Go and Go+ get a conventional handbrake lever.

Fitting a traditional handbrake also means that the connected front seats on the older cars have been replaced by traditional individual bucket seats. This has also freed up space to place cup holders/mobile phone placemats on the floor. The other big addition to the cabin is, of course, the proper armrests on the doors. The driver-side armrest features four power window switches, meaning that at least some variants of the new Go and Go+ will feature power windows for all doors.

Both the cars are now available with a 7-inch touchscreen infotainment system! This, apart from having an in-built multimedia player with Bluetooth/Aux-in/USB/Radio playback, also supports Android Auto and Apple CarPlay smartphone connectivity with Google Maps navigation. Our first glimpses of the system were surprisingly good the screen felt both informative and responsive. Additionally, Datsun is also offering a rear camera as accessory on the top end variants, which can display feed at the system.

The Datsun Go and Go+ now comes fitted with dual front airbags, ABS+EBD+BA, rear parking sensors, driver-side seatbelt reminder and escort headlamps as standard across all variants. While these features have been added to comply with upcoming safety norms, the Datsun twins will have the first mover advantage. Datsun has also had a specific focus on improving the structural strength of the GO Twins, which has resulted in an overall increased weight on the latest iterations.

Under the bonnet, both the Datsun Go and Go+ are powered by the same 1.2-litre, petrol-manual powertrains as their pre-facelift variants. And just like on the outgoing models, the 3-cylinder naturally aspirated petrol motor, which develops 68PS/104Nm, has been paired to a 5-speed manual transmission powering the front wheels.Datsun also says it has implemented different gear ratios than the outgoing models to enhance the overall pickup and agility in the new models.

The new Datsun Go will lock horns with the upcoming and much awaited 2018 Hyundai Santro, we have seen the latter recently and got a feel of what all it will bring to the market, you can check out our first impressions here.