SUVs stole the limelight this week with MG finally launching the Hector, the Jeep Compass Trailhawk making its debut and Kia revealing the Seltos’ launch date. Here are all the highlights: 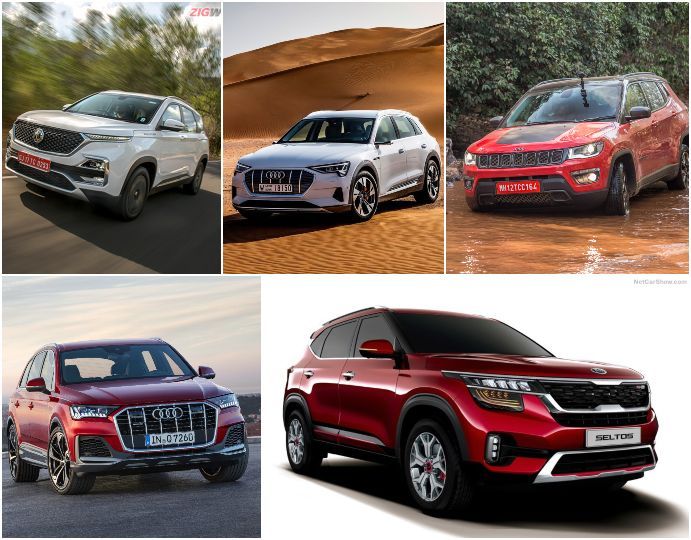 This week saw a host of SUVs grabbing the headlines with launches, reveals and more. MG launched the Hector, which also marks the debut of the British brand’s operations in India. In other news, Jeep launched the off-road focussed  Compass Trailhawk. Kia, meanwhile, has finally revealed the launch date of its first offering for India - the Seltos. And to top it all off, Audi showcased the all-electric e-tron in India with a launch slated for the end of this year

MG has finally launched its much-anticipated SUV, the Hector, with an aggressive price tag ranging from Rs 12.18 lakh to Rs 16.88 lakh (ex-showroom pan India). The Hector is available in a total of four variants - Style, Super, Smart and Sharp. The Hector brings a host of  connected features as a novelty to the segment, but it has a lot riding on its shoulders. Powering the Hector are a 1.5-litre turbo petrol and a 2.0-litre diesel motor. The FCA-sourced 2.0-litre diesel mill churns out 170PS and 350Nm while the 1.5-litre makes do with 143PS and 250Nm of torque. The latter is also offered with a 48V mild-hybrid system which improves the fuel efficiency by 12 per cent. The petrol-mild hybrid and diesel come mated to a 6-speed manual, while the 7-speed DCT can only be had with the petrol. The Hector comes packed with features and the much talked about iSMART connected features. You can read more about it here. Want to know more about the Hector? Head over here.

Kia Seltos To Be Launched On August 22

The Seltos will be the newest entrant in the crowded compact SUV segment when it goes on sale on August 22. It has already broken the internet with its styling and four transmission options (6-speed manual, CVT, 6-speed automatic, 7-speed DCT). The Seltos has got everything right on paper and its opponents have every reason to worry. Kia has a potential winner on its hands and with the right pricing, it could crack the segment. The Seltos will be available with three BS6-compliant engines. The 1.5-litre petrol churns out 115PS and 114Nm of torque while the 1.5-litre diesel engine pushes out 115PS and 250Nm of torque. The talk of the town, though, is the petrol 1.4-litre Turbo GDI unit that is good for 140PS and 242Nm. The features list is another forte of the Seltos as it comes packed with all the goodies, the most impressive one being the premium Bose sound system. It will also feature a host of connected features (UVO connect) similar to the BlueLink system on the Hyundai Venue. Here’s everything you need to know.

The e-tron is the first all-electric Audi and the first all-electric premium SUV to come to India. The SUV will come in through the CBU route and will feature an  electric motor each at the front and rear axles. The combined output is rated at 408PS and 664Nm and power is sent to all four wheels through quattro AWD system. The e-tron with its ‘Boost’ mode can do 0-100kmph in 5.7 seconds with a top whack 200kmph. The 95kWh lithium-ion battery pack is good for a range of 400kmph and the battery pack also supports fast charging. It can be charged from zero to 80 percent in thirty minutes! The all-electric SUV comes with  features like adaptive air suspension, all-wheel steering, cameras instead of ORVMs, Bang & Olufsen sound system, and more. Head here for more dope on the all-electric e-ton.

Audi has taken the wraps off the Q7 facelift. It gets revised exteriors, all-new interiors, more tech and mild-hybrid powertrains. The Q7 now has more SUV design cues, including black cladding all around, for some much-needed rugged appeal. The 3.0-litre TDi engine will come in two states of  tune - 231PS and 286PS. And the petrol is a 3.0-litre turbocharged unit that produces 340PS. All the engines will also come with a 48V mild-hybrid and brake regeneration systems as standard. Moving on to the features, it gets Audi’s Virtual Cockpit, four-zone climate control, soft closing doors, Bang & Olufsen sound system, and more. The SUV also features  all-wheel drive steering, electromechanical active roll bar stabilization and adjustable stabilizers for better body control and dynamics. You can read more about the Q7 by clicking here.

Jeep Compass’ off-road-focussed version, the Trailhawk, is here. The SUV is priced at Rs 26.80 lakh (ex-showroom pan India), commanding a premium of Rs 3.70 lakh over the top-spec Limited Plus variant. What you get is a diesel-auto combination and some hardcore mud-plugging abilities in true Jeep fashion. Under the hood is the 2.0-litre diesel engine that puts out 173PS and 350Nm. The engine is now BS6 compliant and comes with a 9-speed automatic transmission. Jeep has also made various cosmetic changes to make it more capable off the beaten path. The SUV has more ground clearance, water wading capacity and all-terrain rubber with 17-inch wheels. Most of the notable features have been carried over from the range-topping Limited Plus with few misses like the powered seats with memory function, auto headlamps and rain-sensing wipers. But on the flipside, it gains exclusive features like cruise control, a bigger 7-inch coloured MID and a start/stop system. Head over here for details.