A new luxury van, an updated sedan, and all the news about upcoming cars that you missed last week. 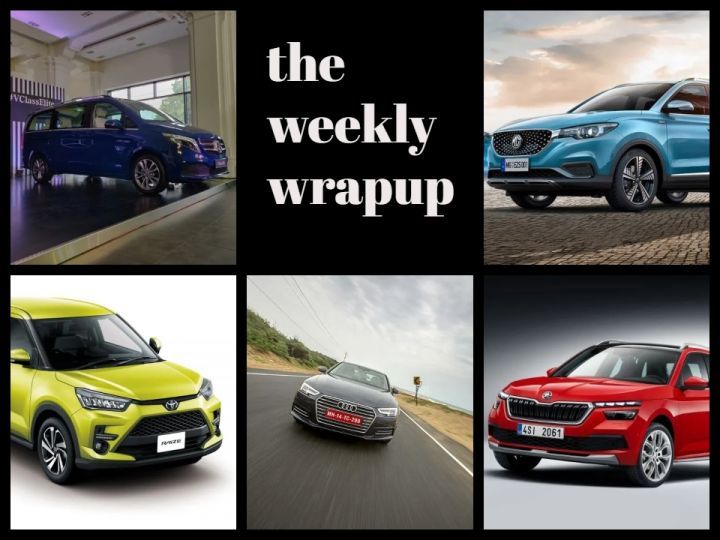 Last week, Audi got us excited with its plans to launch a number of new cars in India next year, though none of them will be diesels. Its parent company, Volkswagen, launched the ID.3 electric vehicle — VW’s people’s car of the future. It’s going to go on sale only in Europe for now, but we also had a bunch of car news from closer home in India, from Mercedes-Benz, Audi and Toyota to MG, Skoda and others. Here’s the TL;DR version of all that happened last week:

While it may have the same body style as the Toyota Sienna, the Mercedes V-Class Elite is the opposite of the utilitarian family runabout. This variant of the luxury people carrier comes with creature comforts comparable to an S-Class, with a Burmester sound system, and costs Rs 1.1 crore in its top spec. Know all about this ultimate MPV by clicking here.

Morris Garages (MG) will take the wraps off the ZS EV on December 5. MG has been preparing for it by setting up charging stations in major metro cities. Does the ZS EV have what it takes to go up against the Hyundai Kona electric? Find out all MG Motor India has in store for the EV market in India by clicking here.

Audi’s new A4 may not be in its 2020 avatar, but it has got a mild facelift. Only available with a petrol engine, the A4 adds adaptive headlamps and autonomous parking to its list of features. To know all about the new Audi A4 QL, click here.

But sadly, it might not come to India. Toyota’s Raize is a compact SUV, which we really wanted in India, but the company might just bring in a rebadged, restyled Maruti Suzuki Vitara Brezza instead. In any case, Toyota’s next SUV is likely to be a Hyundai Venue competitor in India. To read all about why Toyota might not bring the Raize to our shores, click here.

Spy shots of the upcoming Skoda Kamiq SUV testing on Indian roads surfaced last week. Spoiler alert — it’s the Euro-spec model. We’ll get it sometime next year, and it will go head-to-head with the Kia Seltos, Hyundai Creta, MG Hector, and other SUVs. We hope to see it at the upcoming Auto Expo. Know all about the upcoming Skoda by clicking here.

Skoda released a sketch of the upcoming Octavia sedan’s interior. We had spied the interior before, and after so many spy shots and a teaser video, we can’t wait to see what the upcoming sedan will look like. Skoda is set to reveal the sedan next week. Click here to know all about the 2020 Skoda Octavia.