Tata Pulls The Plug On The Harrier Camo Edition 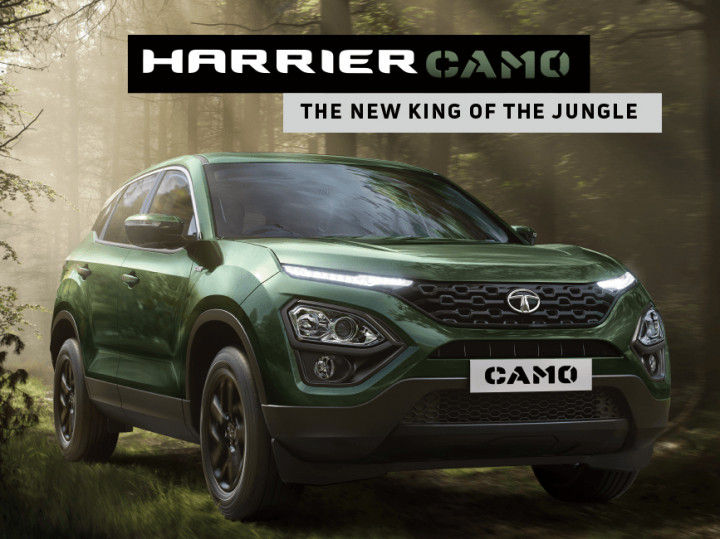 If you had your eyes set on the Tata Harrier Camo Edition, we have some disappointing news. The green coloured SUV, introduced back in November 2020, is no longer on sale. It was offered in six variants, priced between Rs 17.24 lakh lakh and Rs 21.01 lakh (ex-showroom).

What made the Harrier Camo Edition stand out is its Camo Green colour, similar to military vehicles and jeeps used in the jungle. Also, the blacked-out alloy wheels and “Camo” badging gave it the necessary amount of style statement.

Inside, save for the green stitching, the Camo Edition’s cabin is pretty much similar to the older Harrier Dark Edition. Even the feature list remained identical to the standard Harrier.

That being said, the Camo Edition did get its own set of predefined accessory packs, namely Camo Stealth and Camo Stealth+. Some notable features in these accessory packs include a Harrier mascot on the bonnet, Camo graphics, and front parking sensors. Interior additions include a back seat organiser, scuff plates, sun shades, 3D-moulded mats, and anti-skid dash mats.

The Harrier Camo Edition was powered by the familiar 170PS 2-litre diesel engine, paired with either a 6-speed manual or an optional 6-speed automatic transmission.

The discontinuation of the Camo Edition means the Dark Edition is your only choice if you want a Harrier that stands out from the crowd. Tata’s midsize SUV is priced between Rs 14.4 lakh and Rs 21.09 lakh, putting it in the same league as the Hyundai Creta, Kia Seltos, MG Hector, Skoda Kushaq, and VW Taigun.