Based on the H5X’ platform, this sedan concept is the first EV to be born out of Impact Design 2.0 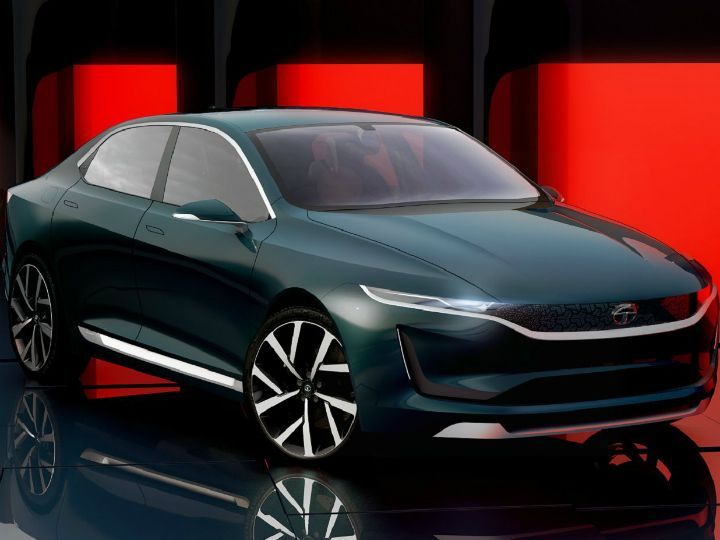 To celebrate its 20th year at Geneva, Tata has unveiled the E-Vision concept. It is the first sedan based on the Impact Design 2.0 and the third in the series of new concepts, two of which (H5X SUV and 45X hatchback) were unveiled at the 2018 Auto Expo. But, while the earlier two are pegged to be conventionally powered, the E-Vision sedan is an all-electric contender and is aimed at showcasing the capabilities of the new OMEGA architecture for EVs. This is the same platform which also underpins the H5X but has been slightly revised to accommodate an electric drivetrain.

Unlike the earlier two concepts that were rather striking, the E-Vision has a clean and simple approach to design, only highlighted by elements like sleek headlamps, animated taillamps and shoulder creases. Certain elements which differentiate it from its bloodline are the brushed aluminium trims which underline the grille, sides and the rear bumper. Tata calls them ‘Humanity Lines'. The grille and the headlamps too in Tata's books are termed as 'pieces of high-tech jewellery'.

Inside, the cabin is highly minimalistic - all the displays, except for the all-digital instrument cluster, are tucked away. And because there is no gearbox, the footwell is fully open. The centre screen slides out of the centre of the dashboard in almost a tray like fashion and displays info like climate control, while the other information screen is placed on top of the dashboard with a sleek display for navigation. The steering itself is a leather-wrapped flat-bottom unit with wooden accents. And, since the batteries are placed under the floor, the E-Vision is expected to be quite spacious as well.

There is not much information about the drivetrain at this point, but we know that the concept features two motors, AWD, both slow AC charging and fast DC charging, has a top speed of 200kmph, a 0-100kmph time of sub-7 seconds, range of 350-420km, and will feature advanced technologies like predictive energy management systems, connected technologies such as cloud computing, analytics, geospatial mapping and increased human-machine interface.

We do want this car to be available in India as soon as possible and rival the likes of the Hyundai Elantra and the Skoda Octavia. But, unlike the H5X which will go into production this year, this one remains a design study for future Tata EVs.