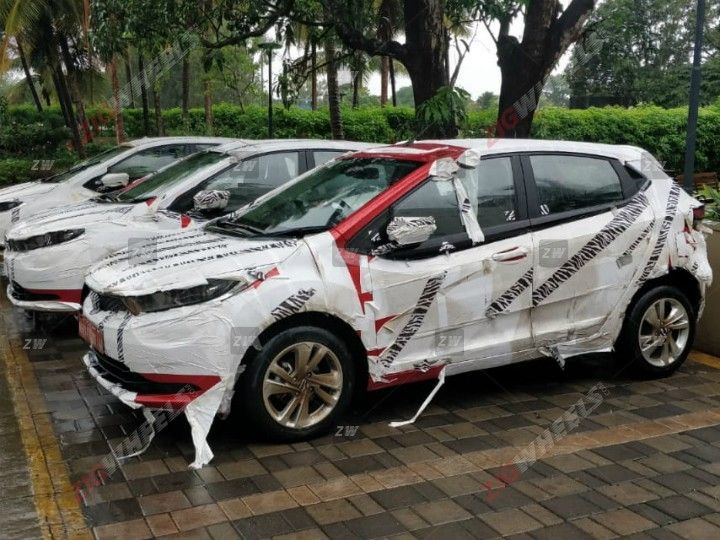 The Tata Altroz is one of the most anticipated cars of this year. Right from when it was showcased at the Geneva Motor Show, the hatchback grabbed everyone’s attention with its sharp styling and premium feel. Slated for launch later this month, we have now spotted the production-spec Altroz along with its interiors and here’s what you can expect.

The spy pics show three Altroz heavily covered up with camouflage. Two of the three hatchbacks can be seen flaunting a red shade while the last car sported the trademark gold shade, similar to the Geneva edition car. The camouflage is hiding most of the design elements but Tata had recently teased the premium hatchback through a set of images which gives us a peek into its sleek styling. Nothing much can be traced out due to the camouflage but you can see the black inserts in the lower window line and the single-tone alloy wheels wrapped in 185/60/R16 tyres.

From the numerous spy images over the course of time, it is clear that Tata hasn't tinkered much with the styling of the Altroz that was showcased at Geneva.  We can also see an up close image of the blacked-out dual-barrel projector headlamps. The interior image is not exactly of the best quality, nevertheless, a dual-tone grey and black scheme is used. A flat-bottom steering wheel with some rich-looking silver inserts can be seen throughout the whole dashboard. The seats and the front armrest also get a nice contrast white stitching. Also seen in action is a 5-speed manual gearbox. The touchscreen infotainment system can also be vaguely seen and we expect it to be sized around the 7-inch mark.

Tata's new Impact Design 2.0 philosophy is featured in the Altroz, most prominently seen in the  shark nose and sharp lines across the bodywork. Underpinning the premium hatchback is the AlphaARC platform, which aims to be a balance between versatility and agility. Two BS6 petrols and one diesel unit can be expected in the Altroz. Higher-end variants are likely to get a 1.2-litre turbocharged petrol motor that churns out 100PS and 140Nm of torque, while the lower variant is expected to come with the 1.2-litre naturally aspirated petrol engine from the Tiago. This engine produces 85PS and 114 Nm.  Tata might borrow the 1.5-litre diesel engine from the Nexon which makes 110PS and 260Nm of torque.

The petrol engines are expected to be offered with a choice of a 5-speed manual and AMT option, while the diesel is likely to be paired with a manual gearbox. Tata also showcased the 250-300km range electric version of the Altroz in Geneva, which might follow later in 2020.

Being pitched as a premium offering, the Altroz is most likely to come with some impressive goodies like a touchscreen infotainment system with Apple CarPlay and Android Auto, automatic climate control, a huge multi-info driver’s display, and steering-mounted controls.

The Maruti Suzuki Baleno, Hyundai i20, Honda Jazz and the recently launched Toyota Glanza are the competitors in the space where the Altroz is debuting. It is likely to be priced from Rs 5.5 lakh to Rs 8.5 lakh (ex-showroom) when it gets launched by August this year.