Tata Altroz Revealed; Premium Rival To Baleno and Elite i20?

Tata's premium hatchback, like its siblings, is a looker. And, it gets an all-electric sibling as well. 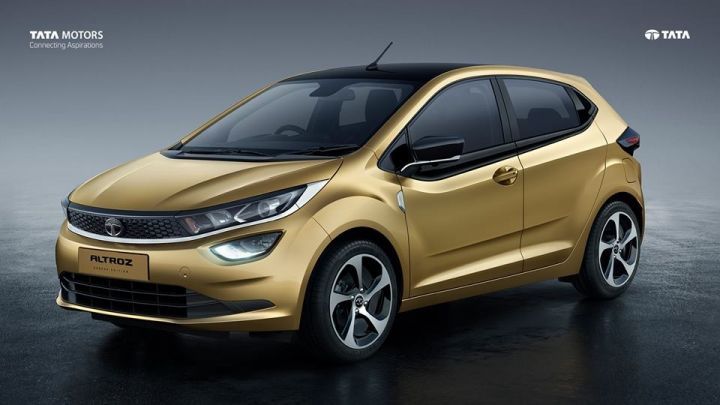 Tata has revealed the Altroz, its premium hatchback for India and the first Tata to be based on the new AlfaARC modular platform. It will slot above the Tiago hatchback and will rival the likes of the Maruti Baleno and the Hyundai Elite i20 in the Indian market. Alongside the Altroz, Tata has also showcased Altroz EV. While the powertrain details are not out yet, we know that it gets a claimed range of over 300km! It will be launched in India in 2020. But if you want your Altroz before that, the internal combustion engine-powered hatchback will be launched close to June in the country, priced between Rs 5.5 lakh-8.5 lakh.

Based on the Impact Design 2.0 philosophy, the Altroz features a slim and wide front grille with sharp lines to make it look edgy. It has the Tata family design and like the Tiago and the Nexon, the Altroz too is a handsome lad. It gets projector headlamps, LED DRLs, 16-inch alloy wheels and LED taillamps as well. Also, Tata claims that the Altroz will be a NCAP 5-star-rating car.

The Tata Altroz will borrow its engine from the Nexon, a 1.2-litre turbocharged petrol which makes 100PS in the hatchback along with 140Nm of torque. It will come mated to a 56-speed manual transmission. There might also be an AMT in the lineup later in the lifecycle. Ironically though, Tata has not confirmed if the Altroz will get the 1.5-litre diesel engine or not. It is likely that due to the declining demand for diesel cars and with BSVI coming in soon, the company has decided against pairing a diesel powertrain with the premium hatchback, at least for now.

Inside, the highlight of the Altroz is a floating touchscreen. It looks similar to the Nexon's 7-inch unit and not the Harrier's 8.8-inch setup. Nevertheless, it supports Android Auto and Apple CarPlay. The instrument cluster gets an LCD display (like the Harrier) which can convey a variety of vehicle information in easy-to-understand graphics. What Tata has mentioned specifically is that it will have a better sound system than the Harman one present in the current lineup of cars. It also gets automatic climate control, rear AC vents and a rear passenger armrest.

It wil likely have same variant nomenclature like the rest of the Tata cars. The Altroz will offer dual front airbags along with ABS as standard along with rear parking sensors and ISOFIX mounts (likely) as well. The LCD display and the floating touchscreen infotainment on the other hand could be limited to the top variant. Lastly, the top variant, likely XZ, could offer up to six airbags as well.

Recent products from Tata have been sales successes owing to their value for money nature and the safety package on offer. If the Altroz is able to keep true to those factors, the Altroz could be another big winner for Tata.