The special edition middleweight streetfighter has been launched in France 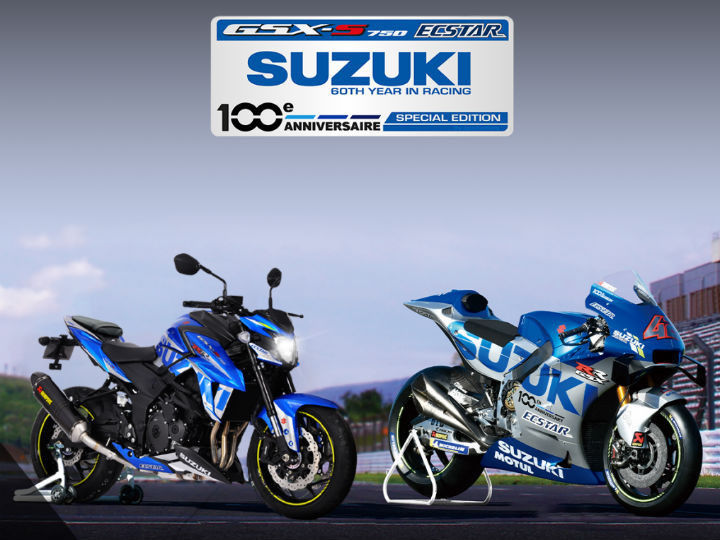 Suzuki wowed us enthusiasts when its racers Alex Rins and Joan Mir unveiled the achingly gorgeous MotoGP livery on its race bike in February this year. It soon trickled down to smaller machines like the GSX-R125 in select southeast Asian markets. Now, in celebration of Suzuki’s 100th anniversary and its 60th year in racing, the Japanese brand has launched the Suzuki GSX-S750 MotoGP Replica in France. Priced at EUR 9,449 (around Rs 8.01 lakh), it is EUR 750 (about Rs 63,600) dearer than the A2-license-friendly standard version sold in the country.

That’s great value for money considering you get to experience the full potential of the motorcycle and then some more. That’s because the A2-spec version makes a paltry 48.1PS and 62.9Nm (to make it newbie-friendly) whereas the MotoGP Replica gets the full power of the stock motorcycle: 115.5PS at 10,500rpm and 79.4Nm, plus the added performance of an Akrapovic slip-on exhaust system. Apart from the exhaust system and the exclusive MotoGP-inspired livery, the bike also gets a tail tidy kit, tank pad and wheel rim stickers for added premium quotient.

The rest of the bike has remained unchanged, though. The engine is reined in by a three-level traction control system, and there’s dual-channel ABS as standard. Underpinnings include a 41mm inverted front fork and a linked monoshock, both preload-adjustable, from Kayaba. Braking is courtesy dual 31mm front petal discs with Nissin radial calipers and a single petal disc at the rear.

In the Indian market, the Suzuki GSX-S750 was the second localised big bike from the Japanese brand after the legendary Hayabusa. Suzuki is expected to launch the BS6-compliant version soon and we really hope the brand brings this MotoGP Replica as a variant too. Who doesn’t want to get a taste of the legendary MotoGP racing genes?