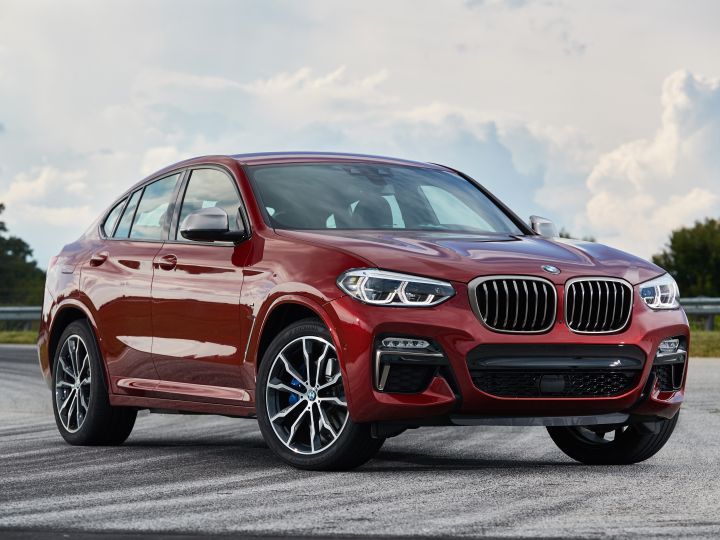 BMW has launched the X4 SUV-Coupe in India at a starting price of Rs 60.6 lakh (ex-showroom pan-India). The SUV has been launched with two diesel engine options, the xDrive20d and the xDrive30d, and one petrol engine, the xDrive30i. All of which are available in a single M Sport X variant, which has been launched in the country for the first time. The X4 will be locally produced in Chennai and will slot in between the X3 and the X5 in BMW's X family. The prices of the three engine options are as follows.

The BMW X4 gets its styling cues from the X6 and definitely looks sportier than the X3. The coupe-like silhouette helps it look distinctive and along with the sleek headlamps and the flared wheel arches, the X4 is one of the good-looking members of the family. It gets fully adaptive LED headlights and LED fog lamps along with a big kidney grille at the front, 19-inch alloy wheels at the side, and wraparound taillights and twin exhaust pipes at the back.

Inside, you get 'Vernasca' leather upholstery as standard along with a 10.25-inch infotainment touchscreen which gets BMW Apps, Wireless Apple CarPlay and is paired to a 16-speaker, 600 watt Harman Kardon sound system. It also has a full-colour BMW Head-Up Display. Other features include the BMW Display Key, Gesture Control, Wireless Charging, multifunction M leather steering wheel and illuminated M door sill. The BMW X4 also gets a glass roof along with the ambient lighting and welcome carpet lights which we have seen on the X3 and the 7-series. For passenger comfort, the X4 also gets adaptive suspension that makes it possible to adjust the damper characteristics to suit any given driving situation, increasing comfort and driving dynamics.

In terms of performance, the 3.0-litre diesel is the quickest to 100kmph, taking just 6.0 seconds. The 2.0-litre petrol is just 0.3 seconds slower while the 2.0-litre diesel takes 8.0 seconds to complete the same sprint. All the options come mated to the 8-speed Steptronic Automatic Transmission and all-wheel drive.

The BMW X4 will rival the Mercedes GLC 43 AMG Coupe which is priced at Rs 78.03 lakh in the country.