The Karoq is Skoda’s second attempt in the premium midsize SUV segment after the immensely capable yet overshadowed Yeti. How does it fare when pitched against its rivals? 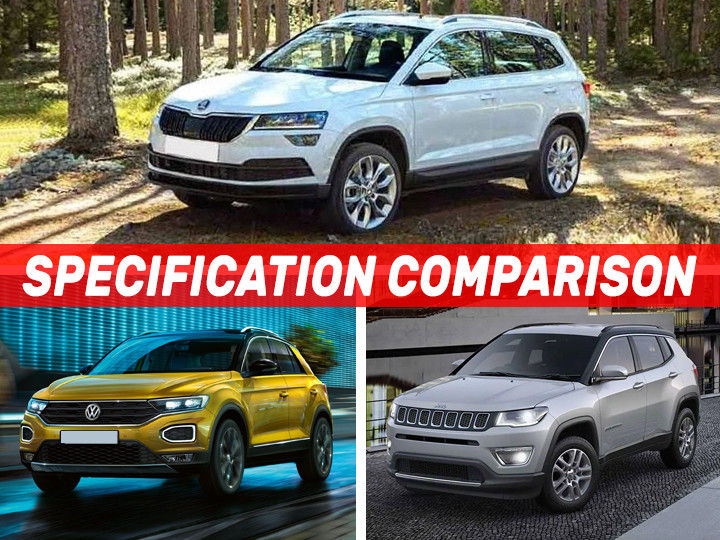 Skoda India has launched the Karoq at Rs 24.99 lakh (ex-showroom, India). The Karoq is Skoda’s second attempt in the premium midsize SUV segment after the immensely capable yet overshadowed Yeti. In fact, it is the spiritual successor of the Yeti. It’s brought to India as a completely built unit (CBU) and locks horns with the recently launched Volkswagen T-ROC and Jeep Compass. How do their specifications match up? Let’s find out.

The Skoda Karoq is the widest SUV in this test and has the longest wheelbase. It falls short on overall length and height when compared to the Jeep Compass. Meanwhile, the VW T-ROC is the smallest SUV in this bunch. In terms of boot space, the Karoq has the largest followed by the T-ROC and the Compass.

The Karoq is the best equipped here, with premium features like powered front seats and ambient lighting, which the T-ROC and Compass, respectively, lack.

The Skoda Karoq and Volkswagen T-ROC come with a 1.5-litre TSI petrol engine that develops 150PS of power and 250Nm of torque. This powertrain comes with active cylinder technology, shutting down two cylinders during low loads for improved fuel economy. While it may be loaded with tech, VW’s 1.5-litre TSI motor is 13PS down when compared to the Jeep’s unit. However, it develops an identical 250Nm torque.

The Skoda Karoq and VW T-ROC can be had with a 7-speed DSG only. On the other hand, the Compass’ base variant is offered with a 6-speed manual while top-spec variants utilise a 7-speed DCT. The Compass also packs in a 170PS 2.0-litre diesel engine, an option which its European rivals lack.

At Rs 24.99 lakh (ex-showroom), the Karoq does seem like a pricey affair, especially when considering that the Volkswagen T-ROC and the top-spec Jeep Compass petrol is cheaper by around Rs 4 lakh. Both models also come loaded with a raft of equipment to satisfy customers and the Jeep also has an added advantage of a diesel engine. That said, the Karoq with its premium design elements, luxurious creature comforts and long list of safety features could catch those buyers who are looking for a premium midsize SUV with an extra dose of luxury.