This is the first of three bespoke coachbuilt Boat Tails, belonging to a couple that also own a restored version of the original Boat Tail 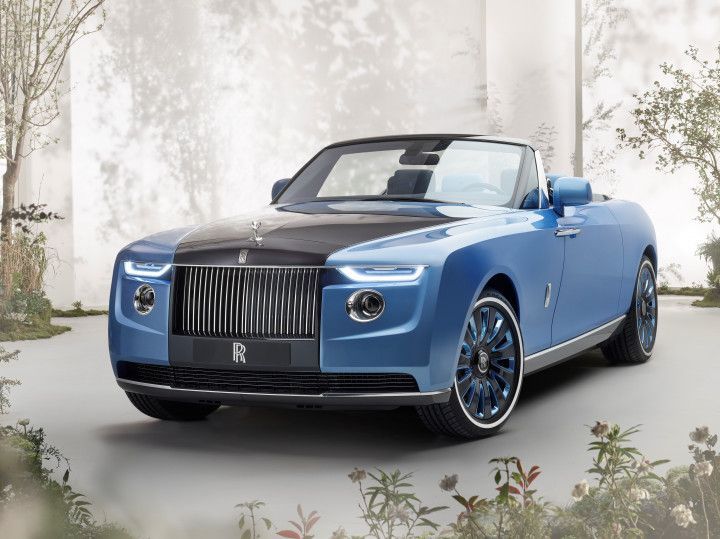 Luxury carmaker Rolls-Royce has unveiled the coachbuilt Boat Tail, the first of three bespoke models custom-made to the preferences of each client. Here are six interesting details about it you ought to know:

Rolls-Royce offers a feature called coachbuilding, wherein a client can commission a bespoke body style while remaining within the confines of the luxury carmaker’s design language. This Boat Tail here is also a coachbuilt model, the first of three to be made. Rolls-Royce has also announced the revival of its coachbuilding operations for future models.

Why Is This Boat Tail Special?

The first of three Boat Tails to arrive, this model has been commissioned by a couple that already owns a restored version of the original Boat Tail. This new model’s design has elements of a J-Class yacht as well as the original 1932 Boat Tail. It even gets a wooden rear deck.

All Hands On Deck!

Yes, what you see there is the rear deck… on a car… a Rolls. The wooden back panel has stainless steel pinstripe inlays to add to the visual appeal. The butterfly-styled doors open up to exactly 67 degrees, followed by the contents inside which are raised on a platform by 15 degrees. The contents? All you can think of, from luxury silverware and fine cutlery to two refrigerators, two picnic tables, and towels of course. One of the refrigerators is specially designed for champagne bottles, and is capable of rapidly cooling the bottles to their ideal serving temperature of 6 degrees Celsius. Additionally, if the umbrellas in the doors weren’t enough, there’s an extra one tucked beneath the centre-line of the deck as well.

As Bespoke As It Gets

In addition to that fancy deck, there are other bespoke elements that cannot go unnoticed. There’s that sweeping removable canopy roof with the buttress-like, extended structural elements. Rolls-Royce has also catered to when the Boat Tail is caught in the rain with its roof off by offering temporary seat covers (tonneau) as well. Inside, the instrument dials are treated with a technique called guilloche. The timepieces are custom-made for this particular model by BOVET 1822, and can be used as wristwatches as well. To cater to the clients’ love for pens, this model’s glovebox contains a Montblanc, housed in a hand-crafted leather and aluminium case. Like the exterior, the interior too gets two nautical shades of blue, the darker on the front seats and the lighter on the rear.

Closer Look At The Design

The nautical theme is apparent as you move your gaze towards the rear, but the front still has that dazzling appearance synonymous with a Rolls-Royce. There’s that pantheon grille, flanked on both sides by those round headlamps and wide LED DRLs. While the front gives off that luxurious Rolls vibe, it is in profile that you realise the sheer size of the car and its near-5.8m length. At the rear you’ll notice the level of craftsmanship that’s on par with that of luxury yachts, especially with those tail lights which are set low to give off the appearance of a boat’s dipped stern. Bits of carbon fibre are evidently used around the lower parts of the car, on the bumpers and the sides.

While we don’t have the official specs of the Boat Tail, we know for sure that its nautical influences are limited to just the looks. It will definitely not float if taken out to sea. You can expect it to utilise the same powertrain as in the Cullinan, Phantom, and Ghost: a 6.75-litre V12 twin-turbo unit that puts out around 570PS and 900 Nm.

This is just the first of three Boat Tails to come. While all three will share the same body, each will be distinctly different from each other, with bespoke inputs from the respective clients. We can’t wait to see the other two models as well.