Renault HBC (Kiger) And Nissan Magnite Spied Next To Each Other 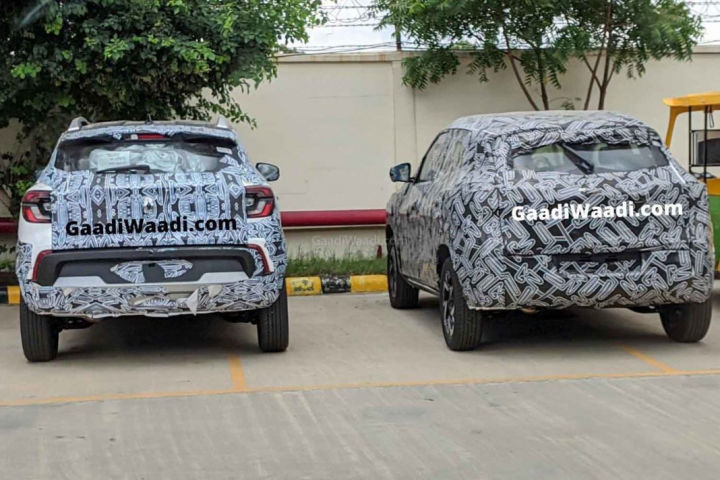 Renault and Nissan will soon be present in the sub-4 metre SUV segment with the HBC and Magnite respectively. We had already seen the Magnite in its concept iteration while the Renault is yet to be revealed. Now a spy shot of both the SUVs being parked next to each other has surfaced online.

Both the manufacturers have done a blooming good job differentiating the two SUVs despite them being based on the same platform. The Renault HBC has shed some of its camo and we could notice design elements such as the ‘C’-shaped LED tail lamps, the butch rear bumper and a sculpted tail gate. But, we must admit that it looks more like a blown-up Kwid.

The production-spec interior of both the models is yet to be seen. That said, Nissan had earlier revealed the Magnite’s interior design sketches and it looks simple yet funky. Have a closer look at it right here.

Both SUVs should come with a touchscreen infotainment system with Apple CarPlay and Android Auto, climate control, cruise control, keyless entry with push button start, LED headlamps and digital instrumentation. On the safety front, expect multiple airbags, ABS with EBD, and rear parking sensors. Some of the Magnite’s confirmed features include a 360-degree camera and connected car technology.

The Renault HBC is likely to be unveiled by the end of this year and sales are likely to start in early 2021. The Magnite’s launch, on the other hand, has been postponed to around the same time in 2021. Expect both the SUVs to have an aggressive starting price of around Rs 6 lakh (ex-showroom). Both SUVs will fight it out with the Hyundai Venue, Tata Nexon, Ford EcoSport, Mahindra XUV300 and the upcoming Kia Sonet, Toyota Urban Cruiser.