It will be loaded with features like connected car tech, a 360-degree camera and an 8-inch infotainment display. 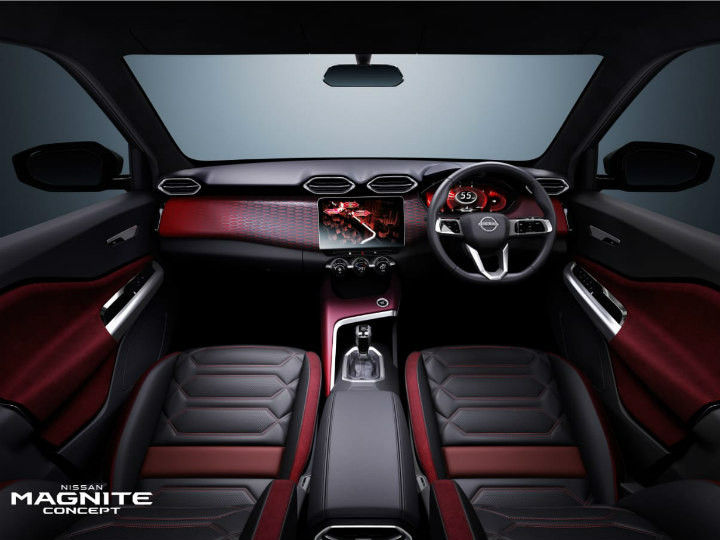 Almost a month after Nissan revealed its upcoming Magnite sub 4-metre SUV in concept form, the carmaker has now unveiled the cabin of the Magnite concept ahead of its expected launch in January 2021. And we can tell you that not only will it be minimalistic, but funky as well.

The cabin in the Magnite concept sports what looks like a two-tone upholstery combination of black and maroon red all over with a funky pattern running across the middle portion of the dashboard. At the center lies a tablet-style touchscreen infotainment system with climate control knobs below. Other highlights include a digital instrument cluster and AC vents placed at the upper end of the dashboard.

We can safely say from these images that the Magnite is set to be one of the more feature-loaded SUVs in its segment. Some expected bits include cruise control, a 360-degree camera as well as connected car tech. Expect more features such as Android Auto and Apple CarPlay, climate control, and maybe even a sunroof. Safety kit could include around 4 airbags, ABS with EBD, and electronic stability control.

Spy shots of the production-spec Magnite in heavy camouflage reveal a similar bold silhouette as showcased in the concept. It also sports alloy wheels, roof-integrated spoiler, and roof rails which are likely to be functional like the Triber. Expect features from the concept like the large single-piece front grille and ‘L’ shaped LED DRLs, as well as spilt-wraparound tail lamps to be retained for the production-spec Magnite.

The Magnite is likely to share its powertrain options with the upcoming Renault HBC (Kiger). It could include the Renault Triber’s 72PS 1.0-litre naturally aspirated engine and a new 1.0-litre turbo-petrol unit that’s expected  to deliver around 100PS. Both engines could be paired to a standard manual gearbox with a CVT option exclusive to the turbo-petrol motor.

Expect the Nissan Magnite to launch at competitive prices starting from around Rs 5.5 lakh (ex-showroom). It will go up against the likes of the Tata Nexon, Ford EcoSport, Maruti Vitara Brezza, Hyundai Venue, the Mahindra XUV300, Kia Sonet and the upcoming Renault Kiger.