The most affordable Mahindra is getting an update in less than two years since its launch, while the industry prefers a three-year update cycle 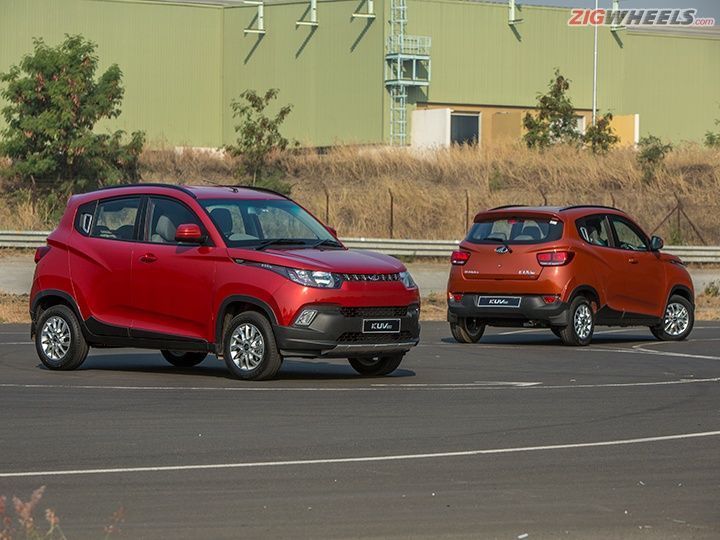 The Mahindra KUV100 facelift will launch tomorrow with a handful of cosmetic changes. If the pictures floating around the Internet are anything to go by, the updates will include a fresh bumper with black surrounds for the fog lamps, all-black rear door handles, new 15-inch machined alloy wheels and a clear lens taillamp cluster. Interior changes are likely to include a new 7-inch touchscreen infotainment system. The three aircon knobs will also make way for a cleaner button layout with only one knob to control the fan speed. The car will also get a new suffix and will be called KUV100 NXT.

The car's SUV-ish looks along with space for six (with the front bench seat configuration) have been its USPs. To make room for three in the front, the carmaker provided a dashboard-mounted gear lever, which puts the middle passenger at a serious safety risk as there are only two 3-point seatbelts in the front. If you're sitting front and centre, you'll have to settle with a lap belt. On the bright side, the front centre passenger's backrest folds forward and makes for a comfortable armrest that's also wide enough to accommodate two forearms.

The KUV was also the UV manufacturer's first offering to pack the homemade 1.2-litre mFalcon G80 petrol engine with variable valve timing. It makes 83PS of power at 5500rpm and 115Nm of torque between 3500 and 3600rpm. Just like the petrol motor, the 1.2-litre D75 diesel engine is also a 3-cylinder unit and it generates 78PS of max power at 3750rpm and 190Nm of peak torque between 1750 and 2250rpm. Both powertrains come paired with a 5-speed manual transmission.

The Mahindra KUV100 is losing market share rapidly, and the production has plummeted from close to 3,000 units in March to just a third of that in August. Meanwhile, its closest rival, the Maruti Suzuki Ignis, has settled into its rhythm of ~4,000 units per month after hovering around the 5,000 units mark in the first quarter. The update should give the micro-SUV's sales figures a boost as it comes during the festive season. Whether it's enough to sustain 3,000 units/month remains to be seen. Ex-showroom prices of the car in Delhi currently range from Rs 4.64 lakh to Rs 7.42 lakh and we aren't expecting a major revision.