The baby Lambo now has a convertible sibling and its drop-top gorgeous! 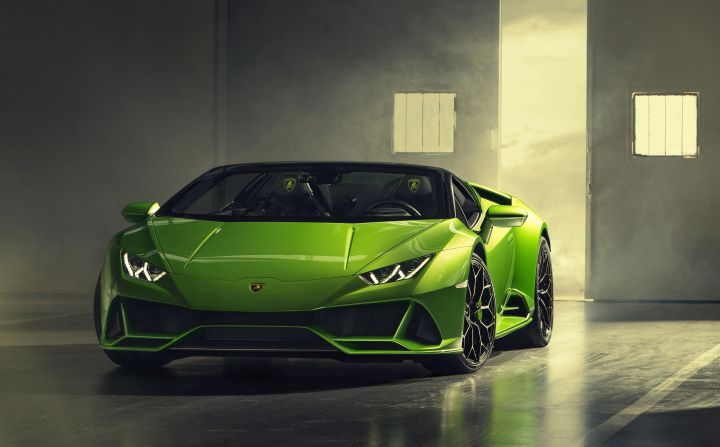 Earlier this month, we broke the news that Lamborghini was set to unveil a convertible version of the Huracan EVO at the upcoming Geneva Motor Show. And just a couple of weeks later, Lamborghini has confirmed the same by unveiling the gorgeous Huracan EVO Spyder in all its glory, just ahead of its world premiere on March 5.

Boasting the same specs and features as the coupe, but with a stunning drop top design, the Huracan EVO Spyder joins its coupe counterpart launched earlier this year. Like the EVO, it features a reworked front end with a sharper nose, wider intakes and different front splitter and wings. The rear features an integrated spoiler along with a tail section that is reminiscent of the Huracan Performante, with the dual exhaust pipes sticking out right from the mid-section of the tail.

The Spyder adopts Lamborghini’s next-generation vehicle dynamic control and aerodynamics developed for the coupe, with the 5.2-litre naturally-aspirated V10 engine uprated for a higher power output and incorporating titanium intake valves. The roof opens in just about 17 seconds and can be operated at speeds of up to 50kmph. The EVO Spyder weighs in at 1542kg, a tad more than the coupe that weighs 1422kg.

The mechanical specs of the Spyder are the same as the wild coupe, and the V10 engine churns out 640PS of max power and 600Nm of peak torque. The engine is mated to a 7-speed dual clutch transmission that drives all four wheels. While the coupe does a 0-100kmph run in just 2.9 seconds, the convertible is a tad slower at 3.1 seconds. However, it gets the same top-speed as the Huracan EVO at 325kmph. Hair raisingly fast indeed!

On the inside, the Spyder gets the revised touchscreen infotainment system seen on the EVO. It gets Apple CarPlay and Android Auto as well as a telemetry mapping system that records and analyses track data and performance figures.

The Huracan EVO Spyder will make its global debut at the Geneva Motor Show on March 5, with sales set to start in international markets from April onwards. The raging bull had brought the Huracan EVO (for Rs 3.73 crore, ex-showroom) to India just a month after its global reveal. So you can expect the Spyder to follow in its footsteps too. We certainly cannot wait to get our hands on this beauty from Sant’Agata Bolognese, which could be priced slightly more than its coupe sibling.

The Open-top Lambo Huracan Evo Is Now In India