Is the Austrian Scalpel a worthy buy despite its high price? Find out in this review in detailed images 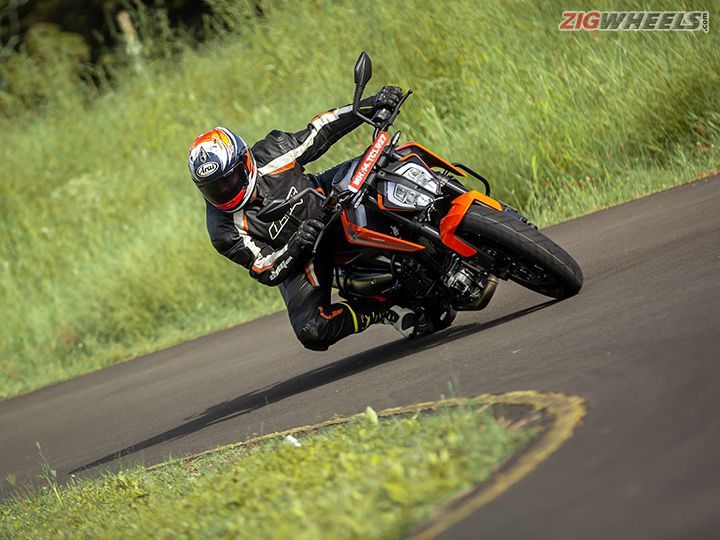 KTM has finally launched the 790 Duke in India at Rs 8.64 lakh (ex-showroom) and we have already put the bike through its paces at Bajaj’s Chakan track. It may have an un-KTM-like pricing and output figures on paper. However, things are completely different once you swing your leg over the saddle. Here’s a detailed review of the bike in images:

At first glance, it’s easy to mistake this bike for the 390 Duke. However, the large parallel twin engine, tapered underseat exhaust and fatter swingarm give the bike a lot more muscular look than the 390 Duke.

The overall build quality reeks of premium-ness, clearly indicating that the bike has been made in Mattighofen, not Chakan.

Compared to the 390 Duke, the handlebars aren’t as close to the seat, giving a sense of space. The overall riding position is fairly neutral with just the right amount of sportiness.

The 799cc LC8c parallel twin motor is quite responsive because it makes a huge chunk of its 87Nm between 3000rpm to 6000rpm. The motorcycle didn’t feel out of its powerband even on slower, tighter turns at the track either.

KTM offers a 6-speed transmission with slipper clutch and bidirectional quickshifter as standard. The gearbox works extremely well when ridden hard. However, at low speeds it feels a little clunky. Also, it is a little sensitive if you keep pressure on the shift lever before upshifting.

The motor is reined in by a host of electronics like lean-sensitive nine-level traction control, cornering ABS, engine brake control, wheelie and launch control. You can tinker with the settings on the TFT colour screen which looks smaller than the one on the 390 Duke.

Thanks to the steep 24-degree rake and tight 98mm trail, the bike is super quick to turn into corners. It also turns precisely without requiring much effort. The motorcycle is also forgiving enough to let you correct your lines mid-corner.

The front fork is non-adjustable but the setup is so well-balanced that you’ll not miss having more sophisticated underpinnings.

The Maxxis Supermaxx ST tyres offer plenty of grip and feel but they’re no match for Pirelli Supercorsas, though.

At 825mm, the rider’s seat might be a little tall for shorter riders. However, the bike is slim enough to allow shorter riders to straddle around easily. The pillion seat is comfortable for riders of different statures too.

Overall, the KTM 790 Duke is an incredible motorcycle that will quite literally do everything that most people need from a sport naked, while leaving a stupid grin on their face every time they take a spin.