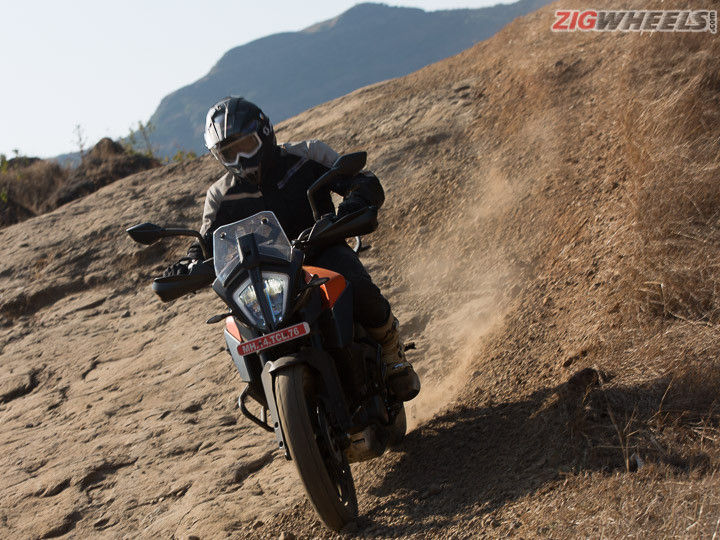 It certainly has to be one of the most hyped motorcycles in the Indian context and after riding it, the KTM 390 Adventure was not quite the bike that we had envisaged. Is it the do-it-all motorcycle for India, we asked. The answer lies in our review as well as in our video from the first ride, which you can check out here. However, there were several questions that you dropped in the comments section. Here’s us answering the frequently asked ones:

Why do we need to spend so much more for the 390 Adventure than the Duke if you want a touring bike?
After completely revamping the bike in 2017, the KTM 390 Duke became more welcoming for riders of all sizes. It got a larger tank and comfortable ergos. Even though you could effortlessly carry triple digit speeds without any strain from the motor, the new riding posture was more supermoto than naked, forcing you to sit on the saddle rather than in the bike. You can check out our video on the road trip on KTM Dukes to Goa to know what exactly we are talking about here.

The 390 Adventure is a pretty good tourer. It has that extra bit of ground clearance and suspension travel to tackle anything that you would encounter on our Indian roads. Despite the ridiculously high 855mm seat height, the upright riding posture is brilliant for touring. We had hoped that one would be able to carry more fuel on-board but you just get an extra litre than the Duke. And the windshield is capable of protecting riders of most heights from windblast.

Is it worth the extra Rs 50,000 over the KTM 390 Duke?
With the launch of the KTM 390 Duke BS6 at Rs 2.52 lakh, the price difference between the two bikes is Rs 47,000. For that extra price you are getting what we have mentioned above, long travel suspension, touring-friendly ergos and slightly larger fuel tank. Plus, there is lean-sensing traction control and cornering ABS also. Just for the above, it certainly doesn’t add up to being worth that extra Rs 47,000.

However, consider what you are gaining in terms of ability over the Duke. The 390 Adventure will not be as quick and agile as the Duke in the city or for weekend twisty fun but you will be hot on the naked’s tail all throughout. It is certainly better at touring. While it might not be the perfect starter motorcycle for an off-roader, it has the basic building blocks in place for you to at least attempt to go off-road.

Is it good for riders below 5 feet 9inches?
855mm is creeping quite close to motocross territory and not really the adventure segment. It is a daunting task to just climb aboard the 390 Adventure. During stop-go traffic situations or while moving it around in the parking lot (while you are on the bike) will be an issue for the riders below that height. You could learn the trick of sliding off the saddle to move the bike around, just like MX riders do, but right off the bat, it will be an issue. There are no complaints once you are on the move.

How does it stack up against the Royal Enfield Himalayan BS6?
If you want to read on how the 390 Adventure stacks up against the Royal Enfield Himalayan and other adventure motorcycles on sale in India, on paper at least, we have got you covered with this spec comparison. As for the actual riding comparison, we await the arrival of both bikes at our HQ in Pune.