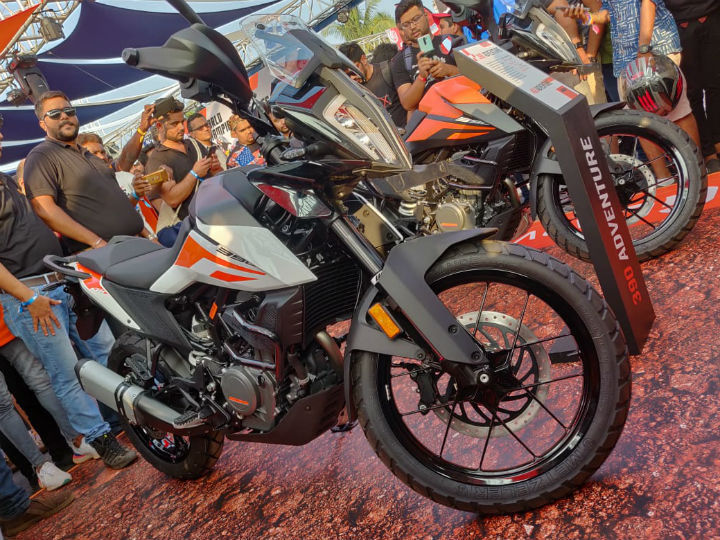 KTM finally unveiled the 390 Adventure in the country at this year’s edition of India Bike Week in Goa. Interestingly, the one unveiled here didn’t match up spec-to-spec with the bike unveiled at 2019 EICMA. The Indian two-wheeler market is a tricky one and for the best balance of practicality and value for money, here’s what KTM has done with the India-spec bike compared to the international one:

KTM has equipped the 390 Adventure with WP inverted fork up front but it isn’t adjustable like the one unveiled abroad. The international-spec bike features both compression and rebound adjustability. While it wouldn’t make much of a difference for casual tourers, pro riders will definitely appreciate some versatility in their motorcycle’s suspension settings. One of the reasons is that the adjuster knobs are prone to be fiddled with at crowded parking spaces. Hence KTM had to settle with the non-adjustable front fork.

Fortunately, the rear gets the same WP Apex monoshock as the international model. It offers preload and rebound adjustability with a decent 177mm wheel travel.

While the India-spec KTM 390 Adventure rides on the same 19-inch front and 17-inch rear alloy wheel combo, they are wrapped with different rubber. It gets Metzeler Tourance block pattern tyres instead of the Continental TKC 70. KTM has opted for these tyres because it has a healthy rapport with Metzeler brand as it already supplies tyres for the 390 Duke as well as the RC 390 in India.

Moreover, the brand has an established presence in the country, making them the natural choice for the Indian market. Interestingly, the BMW G 310 GS also uses Metzeler Tourance rubber on both ends.

Gets quickshifter as standard:

The India-spec ADV comes with a standard bi-directional quickshifter for clutchless upshifts and downshifts. This is available only as a PowerPart option in the model sold abroad. As far as the feature list is concerned, the inclusion of the quickshifter should compensate (at least to an extent) for the lack of adjustable front fork.

Also Read: Here’s How Much The KTM 390 Adventure Is Expected To Cost In India

Apart from these aspects, the motorcycle remains the same as the international model. More importantly, KTM has retained the lean-sensitive traction control as well as the cornering ABS in the India-bound bike, making it a tempting, feature-laden proposition.