Certain variants of the 2020 Honda City stray into compact SUV category. Should you pick up the sedan then or take the SUV route? 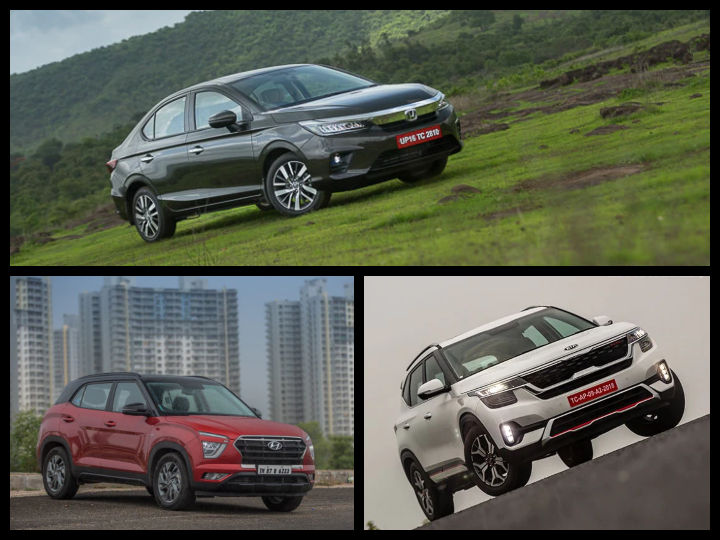 The 2020 City is here and boy, has Honda priced it aggressively this time around. It starts from Rs 10.90 lakh for the base-spec petrol MT variant and goes up to Rs 14.65 lakh for the top-spec diesel manual variant. Have a look at the detailed variant-wise prices here.

Though the base-spec V variant offers incredible value for money for the price you pay, you should know that the top-spec ZX variant clashes into the compact SUV category. This got us thinking with a slight twist: “Should you pick up the City or step up for the Seltos or Creta?” Let’s get it crackin’.

Who Is The Biggest Here?

Unsurprisingly, the 2020 Honda City is the longest car in this comparo while the Seltos is the widest and the Creta the tallest. Both the SUVs also have a slightly larger wheelbase though they fall short on boot space when compared to the City, which has a 506-litre boot.

Styling is a personal opinion.  We feel the Seltos and City come across as neatly styled while the Creta’s design goes a bit overboard. Yes, it might grow on you as time passes by but it could also be a deal breaker for some.

While the Creta’s exterior design may be quirky, its interior design comes across as conventional. Meanwhile, the City and Seltos’ interior takes a more European approach to its design. You can have a look at the design of all three cars in the gallery links attached below:

Had a look at the gallery? You tell us which car’s styling you prefer in the comments section below.

All three cars come with impressive features even though the NA petrol variants of the Seltos and Creta aren’t offered in their top most trims. Common bits include a touchscreen infotainment system with connected car technology, Android Auto and Apple CarPlay, climate control, a sunroof, cruise control, keyless entry with push button start, a large colour multi-info display, LED headlamps with LED DRLs and alloy wheels.

The Seltos and Creta go a step further by offering a nice sound Bose Sound System. And while only the left mirror in the City features a blind spot monitor, it is offered on both sides in the Seltos.

Here are the unique features each car offers:

All three cars in this test come with 1.5-litre petrol and diesel engines. The City’s petrol unit is the most powerful at 121PS while the Seltos’ and Creta’s petrol engine puts out 115PS. They all develop similar amounts of torque at around 145Nm. All of them can be had with either a 6-speed manual or a CVT. Here’s how all three engines fare on fuel efficiency:

However, if you want something fun, we suggest you look at the Turbo variants of the Creta and Seltos. Both SUVs come with a 140PS 1.4-litre turbo-petrol engine that’s offered with a 7-speed DCT. The Seltos Turbo can also be had with a 6-speed stick shifter if you want to take matters in your own hands.

Which One Should You Pick?

Honestly, this boils down to personal preference. If you want a car that’s engaging to drive, has a comfortable rear seat and might be predominantly used as a chauffeur-driven car, then pick up the Honda City. Even the base-spec V variant comes loaded with all the features and you don’t need to step up to the top-spec ZX trim unless you want your City to woo others.

If you need a car with more rugged appeal, mild offroading capabilities and some visual pull, head towards a Kia or Hyundai showroom. If you have the budget to extend, we suggest you pick up the sporty Turbo variants for an engaging drive, or a diesel-automatic variant if convenience and fuel efficiency matters.

Nevertheless, whichever car you pick, we are sure it won’t let you down.