The Kia Seltos is set to shake things up in the compact SUV space and it looks gorgeous! 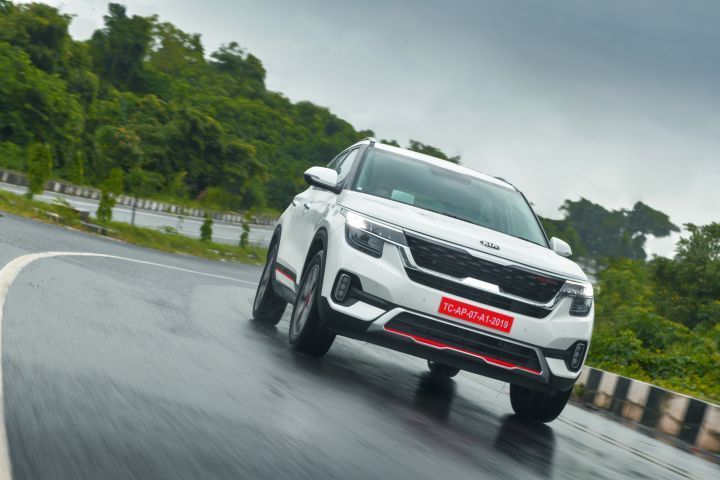 Kia is set to unleash the Seltos SUV in India very soon. The Seltos will be pitched as a premium compact SUV by Kia and will rival the likes of the Hyundai Creta, Maruti Suzuki S-Cross, Nissan Kicks, Renault Captur, MG Hector and the Tata Harrier in the Indian market. Kia will offer the Seltos with a host of engine options and features in two trims - GT Line and HT Line. Here’s a closer look at  Kia’s futuristic compact SUV in detailed pictures.

The Kia Seltos stays true to the SP Concept which was showcased for the first time at the 2018 Auto Expo. At the front, it sports Kia’s signature ‘Tiger Nose’ grille and gets futuristic looking LED headlamps and vertical LED fog lamps below. A chrome wraparound is present on the headlight. The GT trim gets an additional chrome-red insert on the air dam to cap off the front design.

A closer look at the LED headlamps reveal that the Seltos gets 3D multi-layer indicators. An interesting feature of the Seltos is that the slim LED DRL strip on the top of the headlamp extends all the way to the centre of the grille.

The side view reveals some interesting bits like the flared wheel arches with black cladding running all around the bottom of the car. There’s also a neat chrome insert that extends from the windowsill to the rear windshield raking up sharply under the rear quarter panel. The GT Line features a red strip lower on the doors instead of the chrome as is the case on the HT Line.

The Kia Seltos GT Line gets a choice of 16- or 17-inch dual-tone machine-finished alloy wheels that look quite good. With disc brakes on all four wheels, the Seltos should have great handling characteristics.

The Kia Seltos also comes with 205/60 R16 or 215/55 R17 tyre options. The simpler, single-tone gunmetal wheel in the picture above is offered on the HT Line.

Going towards the rear, the Seltos gets a sleek design with one of its main highlights being a neat chrome strip on the boot lid that extends from one tail light to the other. The rear bumper gets a black cladding as well, with faux exhausts and a skid plate. The GT Line gets an additional red strip above the skid plate.

A closer look at the Seltos’s tail light shows LED elements inside which mimic the 3D effect seen on the headlamp. They sport a wrap-around design that blends with the chrome strip. The GT Line sports its trim badge on the boot lid.

The Kia Seltos sports a dual-tone roof as well as a sunroof. Unfortunately, it is not a panoramic unit like the one on the MG Hector. Roof rails complete the exterior highlights of the Seltos.

Inside, the Kia Seltos gets a host of premium features like a 10.25-inch touchscreen infotainment system with Apple CarPlay and Android Auto connectivity and a 7-inch all-digital instrument cluster. Other features include a head-up display, a 360-degree camera, blind-spot monitor, sound mood lighting, and more.

The Kia Seltos also gets its own connected tech system similar to the Hyundai Venue. Called the UVO connect, it gets up to 37 features like AI voice command and stolen vehicle tracker, among others.

Another interesting highlight of the Seltos is the premium 8-speaker Bose 400W sound system. There is a central speaker mounted in the dashboard, two tweeters, front and rear door-mounted speakers along with an 8.0-inch subwoofer.

Under the hood, the Kia Seltos can be had with either one of three engines. The most powerful of the lot is a 1.4-litre Turbo GDI 140PS/242Nm petrol engine that is only offered in the GT Line. The other engine options available are a 1.5-litre 115PS/144Nm petrol and a 1.5-litre CRDI 115PS/250Nm diesel engines which are offered in the HT Line. All three engines are BS6-compliant.

The Seltos will be launched in India on August 22. It will be offered in eight variants that will be split among the GT and HT trim. Once launched, the Kia Seltos is expected to be priced between Rs 10 lakh and 16 lakh (ex-showroom India).