Only 30 units will be produced, completing the 100-car production run of the souped-up muscle car 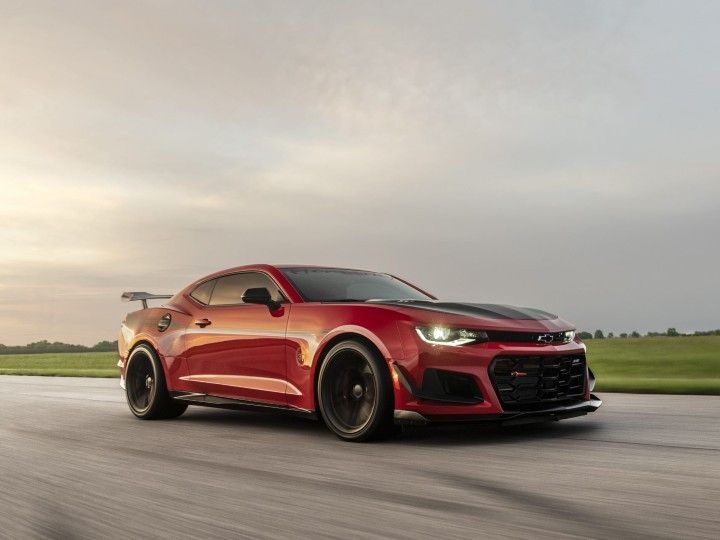 The US-based company, Hennessey, is well known for its bonkers mods that make performance cars even faster. Now, celebrating three decades of souping up cars, Hennessey has revealed the Exorcist 30th Anniversary Camaro muscle car. Based on the Chevrolet Camaro ZL1, the Exorcist 30th Anniversary certainly lives up to its name in Hennessey fashion by exorcising everything behind its rearview mirror with the performance on tap.

What makes the Exorcist 30th Anniversary Camaro stand out from the standard Exorcist is a special anniversary logo behind the front wheels and a spicy red-black body shade. Moreover, each unit will come with an Anniversary Edition chassis plate featuring the individual build number.

In terms of performance, it's just as extreme as the Exorcist Camaro. It’s powered by a 6.2-litre supercharged V8 engine making a whopping 1000PS of grunt and 1197Nm of twist. Offered with both manual and automatic transmission gearbox options, the souped-up muscle car can hit the 0-97kmph sprint in just 2.1 seconds and the quarter mile sprint in 9.57 seconds before topping out at 350kmph.

Compared to the base Chevrolet Camaro ZL1, the Hennessey-tuned Exorcist gets a more potent supercharger, high-flow air induction system, an upgraded auxiliary fuel system, high-flow catalytic converters, a bespoke camshaft, HPE engine management calibration and upgraded valve springs, retainers, intake valves, exhaust valves, lifters and pushrods. The gains not only come from under the hood but also through a dyno-tuned chassis.

Priced at USD 135,000 (around Rs 1 crore), Hennessey is offering the Exorcist 30th Anniversary Camaro in both coupe and convertible body styles. It will be an exclusive offering with only 30 units that will complete the 100-unit production run of the Exorcist Camaro. So if you’ve got around a crore to burn, you may want to go for an unfiltered Camaro.