Exploring The Land Of Dawn-lit Peaks In A 4x4 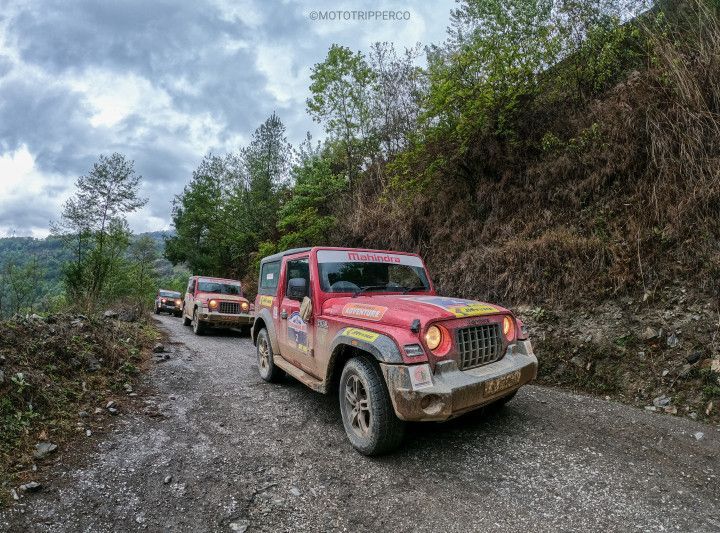 With unspoilt snow-clad peaks and one of the highest motorable roads in the world, Tawang is a paradise nestled in the northwestern region of Arunachal Pradesh. We were invited for the Trans Arunachal Drive 2021 by the Department of Tourism, Government of Arunachal Pradesh. The rally was held from April 5-18, 2021, covering three zones of the state: eastern, central, and finally culminating in the western zone. I joined the last leg of the rally, which primarily covered the city of Tawang and neighbouring places.

With no operational airport in the entire state of Arunachal Pradesh, I had to get off at Guwahati Airport for the start of my adventure. It took me another six hours to reach Shergaon, a hamlet, where I had to join the convoy, which had already covered the eastern and central zones in Mahindra Thars and 4x4 Scorpios -- with Mahindra Adventure as rally partner. Our long journey ended in a cosy tent stay near a stream with local Shergaon delicacies. The next morning we started early for Tawang, kicking off a journey that will evoke fond memories in me for years to come.

As we began our ascent to Tawang, we were greeted by newly laid mountain roads amid lush green oak forests. We took a slight detour to see 108 Mane at Mandala Top. Situated in Dirang, the gateway to the city of Tawang, 108 Mane, is at an elevation of around 10,000ft! As we were ascending, fog started building up and by the time we reached the Top, it felt like we were knocking on heaven's door.

Locals served piping hot famous 'lal chai' (no milk), and it tasted divine in the frosty weather. The 108 Mane is a recently built site that features 108 pillars constructed as five concentric circles with a stupa in the centre. These pillars have the holy Buddhist mantra ‘Om Mani Padme Hum’ inscribed on them.

After a quick lunch at Dirang, the convoy raced towards Tawang to cross the famous Sela Pass before the sun went down. Since it was raining in Dirang, locals informed us it would snow in the Sela Pass region. With an elevation of close to 14,000ft, this zigzaggy mountain pass is among the highest motorable roads in the world. Roads were slick throughout the Sela Pass; only some of the mid and top sections had rough, gravely patches of broken roads, probably due to landslides. The Mahindra Thar was feeling at home and even the Scorpios came into their element.

I’d never experienced snow in my life until I saw the mesmerizing snow-clad peaks while traversing through the Sela Pass. As the convoy was ascending and almost halfway through, I got the first glimpse of the winter wonderland through the large windows of the Thar. The views had me awestruck till we reached the iconic Tawang gate reading ‘Welcome To Tawang.’ Snow-draped peaks and deep valleys made every view on this drive absolutely picturesque.

We crossed the Sela Pass at twilight and rushed to the hotel in Tawang as a big day lay ahead of us. Trips to the Sangestar Tso and Panga Teng Tso lakes around Tawang, and the closing ceremony were planned for the final day. We kicked off the last day by exploring the Tawang Monastery, right next to our hotel.

I was astonished to know that it is the second biggest monastery in Asia after the one in Tibet, with which Tawang shares a border too. Sitting atop a hill, the gigantic yellow-roofed Tawang monastery has rotating prayer wheels, intricate thangkas paintings, and prayer flags. Don’t skip this monastery at any cost if you happen to be in Tawang.

Next, we hit it off for one of the most exciting drives in the rally yet. Sela Pass was just the prelude of what’s there in store for us... snow drive! At 15,200ft, the Sangestar Tso (lake), our next destination, was over 1000ft higher than the Sela Pass. Sangestar Tso is around 40km away from Tawang and it takes roughly less than two hours of scenic snow drive to reach the lake. As it was snowing, roads were slushy so we had to switch our Mahindras to four-wheel high. Everywhere you looked, the snow-cladded expanse was a treat to your eyes. BRO (Border Roads Organisation) has done a wonderful job of making roads connecting borders as always.

The convoy made it to Sangetsar Lake after thoroughly enjoying the snow-draped twisties and several small lakes along the way. Sangestar Tso looked dramatic, with water streams coming in from the hills and snow falling from the sky. It also kinda looked post-apocalyptic to me thanks to the dead tree trunks, foggy atmosphere and super chilly weather.

Interesting fact, this lake was formed by a flash flood after an earthquake in the year 1950. It is also popularly called Madhuri Lake as it was renamed after the shooting of the film Koyla. After a finger-licking lunch at the army cafe alongside the lake, we were off to the closing ceremony of the 2021 Trans Arunachal Rally near the PT Tso lake. Sadly, we didn't go to Bum La Pass, a border pass between Tibet and India, which was not too far away from the lake, as it was snowing heavily there.

Eventually, my adventure in this magnificent state came to an end. The next day we had a long fourteen-hour drive to Guwahati as most of us had our flights late at night or the next morning. While heading out early the next morning to put luggage and warm up the Thar, I saw a majestic view of a sun-lit peak. At that very moment, I realised why Arunachal is called the Land of Dawn-lit Peaks.  Arunachal, especially Tawang, was way more appealing and mesmerizing than I expected. This less-explored state offers some of the country’s wildest terrains, densely forested hills, warmth, patriotism and amazing hospitality--it should be on your bucket list. The memories of the scenic landscape of Tawang and driving on some of the highest motorable roads on this planet in an iconic 4x4 will linger on.

How to reach Arunachal Pradesh: The nearest airports are Dimapur and Guwahati. You can take a helicopter from these airports to reach Arunachal. You can also take a train or travel by road. It is important to note that majority of Arunachal does not need a 4x4 but it always helps.

Disclaimer: The event took place before the lockdown from April 5-18. We are hoping the lockdown restrictions are eased in the coming weeks; meanwhile, here’s our report to fuel your wanderlust.