Nearly half the bike's total weight is from its battery 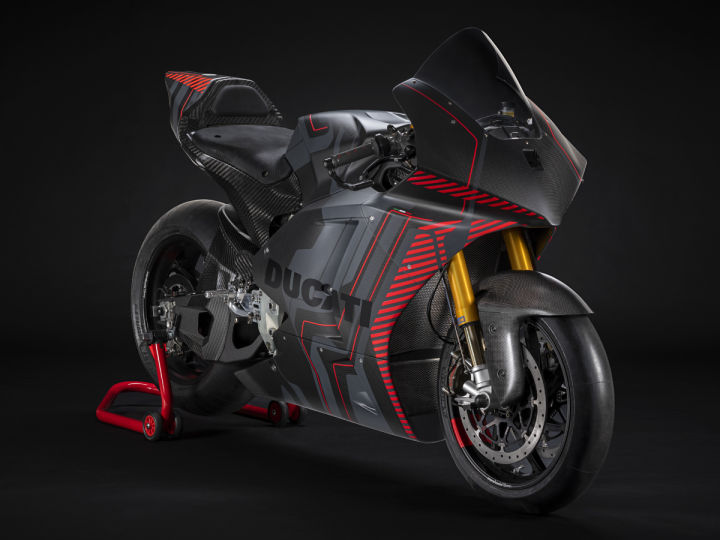 Ducati presented its new 2023 MotoE bike, called the V21L, at an event in Modena. The Bolognese manufacturer is going to be the official supplier of race bikes for the 2023 season of the MotoE championship, which is run in parallel to a few MotoGP rounds.

This is the first time Ducati has taken up such an endeavour of not only creating a performance electric motorcycle but also being the sole manufacturer for a racing series.

There’s no mistaking the V21L for anything other than a typical Ducati. The immediate visual cues don’t scream ‘electric motorbike’ in the way that we’re used to from other entries in the genre. Still, even someone who hasn’t heard about the V21L before getting the chance to see it might suspect its nature just through the red accents over its subtle carbon fibre clothing.

The carbon fibre case of the battery pack also acts as a stressed part of the chassis, similar to the Ducati Panigale V4’s Desmosedici Stradale engine.

This version weighs a stonking 225kg, which is 12kg less than the minimum requirement. Much of that weight comes from the 110kg battery pack, which is an 18kWh unit specially designed to fit this bike and connect directly to the swingarm. A 20kW charging socket is integrated into the tail of this bike. In comparison, the current MotoE racer, Energica Ego Corsa motorcycle weighs 260kg.

Ducati states that the cooling system consists of a double circuit of liquid-cooling for the battery pack, motor and inverter. As a result, there's no need to wait before charging once the bike comes in hot from the track. It can be plugged directly in to charge, and reach 80 per cent charge in 45 minutes.

Peak output is claimed to be 110kW with 140Nm. It’s able to complete the required seven laps of a GP track in its MotoE races, and the top speed it has reached so far is reportedly 275kmph at Mugello, which puts it just a rung lower than the Moto2 class bikes, where top speeds are around 295kmph. Currently, the performance offered by the V21L should be able to match it with the likes of the Ducati Panigale V2.

Other key components include an Ohlins NPX 25/30 pressurised 43mm upside-down fork, which is derived from the Superleggera V4. There's also an Ohlins TTX36 fully adjustable monoshock, as well as an adjustable Ohlins steering damper. Specially-designed Brembo brakes that optimise cooling are also an integral part of this design.

Of course, this bike is still being tested and will only continue to get better as Ducati’s team of test riders and engineers further push and develop it on track.

Ducati’s contract as the sole supplier for the MotoE World Championship is slated to run till the end of the 2026 season, subject to renewal based on the bike’s performance. 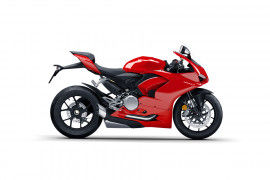 All Comparisons of Panigale V2