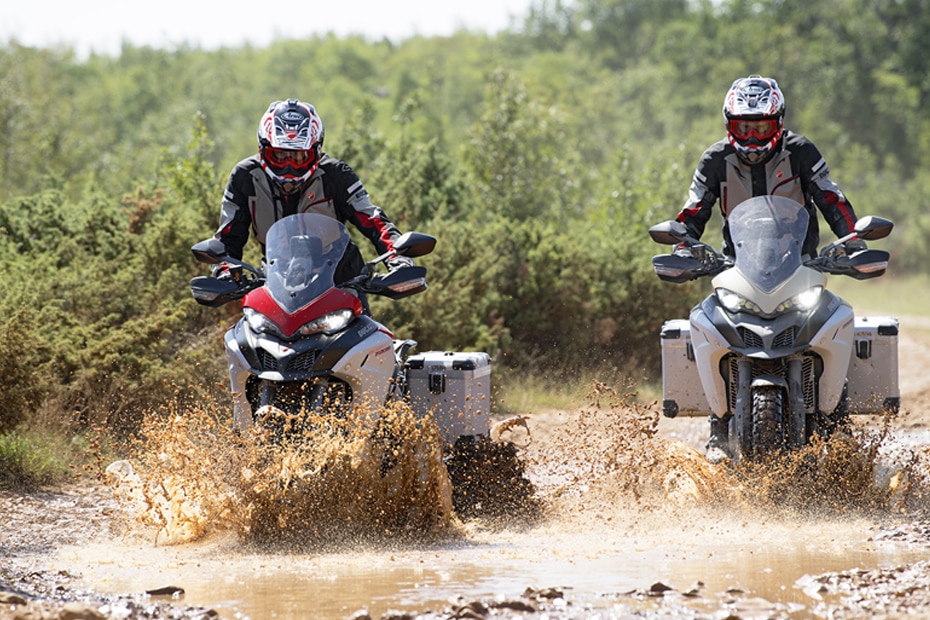 Ducati India has launched the Multistrada 1260 Enduro in India with price tags starting at Rs 19.99 lakh (ex-showroom India). Unveiled in October 2018, this variant is touted to be Ducati’s most hardcore offroad ADV, designed to dance in the dirt with ease. Here’s what the new ADV is all about:

Ain’t no replacement for displacement:

For the Multistrada 1260 Enduro, Ducati took the 1198cc Testastretta L-twin engine and increased the piston stroke from 67.9mm to 71.5 mm. However, the bore value remains unchanged at 106mm. The Italian brand also used new connecting rods, crankshaft and cylinders and recalibrated the Desmodromic Valve Timing (DVT) to maximise low- to mid-range torque delivery. These changes have resulted in an increase in the engine’s displacement to 1262cc, and, at 158.2PS arriving at 9,500rpm, the engine generates 5.5PS more than its predecessor.

The peak torque output has remained unchanged at 128Nm, coming in at 7500 revs. However, the way the torque arrives has been tweaked quite extensively. The new engine makes 85percent of the torque below 3,500rpm. What’s more, at 5,500rpm, there’s a 17percent increase in the torque curve compared to the previous model too. The powerplant is paired with a 6-speed gearbox with slipper clutch and bi-directional quick shifter as standard.

The Ducati Multistrada 1260 Enduro comes with a new ride-by-wire throttle, and is reined in by a host of electronics like three-level Bosch cornering ABS, eight-level traction control and four rider modes (Urban, Sport, Touring & Enduro), eight-level wheelie control - all working in conjunction with a 6-axis Bosch Inertial Measurement Unit.

For the tech-savvy riders, Ducati offers a new 5-inch TFT display with Ducati Multimedia System (DMS) as standard. This system pairs up with Ducati Link App which lets riders access features like caller ID, music and the likes. There’s a cruise control system and a hill-hold feature as standard too. What’s more, the 1260 Enduro also gets an all-LED lighting system with cornering lights!

Packs a ton of off-road-ready kit:

Ducati has equipped the Multistrada 1260 Enduro with a large 19-inch front spoke wheel and a smaller 17-inch rear unit. The spoke wheels are shod with off-road-friendly Pirelli Scorpion Trail II tubeless rubber on both ends. As far as underpinnings are concerned, the bike comes with 48mm Sachs inverted front fork and a Sachs monoshock at the rear. Both front and rear are fully adjustable and are electronically assisted by semi-active Ducati Skyhook suspension. Both the front and rear suspension offer a generous 185mm wheel travel.

While the standard Multistrada 1260 comes with a single-sided swingarm, the 1260 Enduro features a double-sided swingarm which offers better stability while off-roading. Plus, there’s an aluminium bash plate at the bottom to protect the underbelly too.

The fuel tank has been reshaped and the handlebars have been lowered by 30mm for improved ergonomics on the road. This coupled with a 10mm lower seat (860mm) results in a lower centre of gravity, which translates into better off-road dynamics.

An enormous 30-litre fuel tank coupled with the claimed fuel efficiency of 18.1kmpl should result in a theoretical range of about 540km. The Enduro variant also gets a centre-stand as standard.

The Ducati Multistrada 1260 Enduro costs 19.99 lakh for the Ducati Red colour variant. This makes the motorcycle more expensive than the 1200 Enduro by Rs 1.96 lakh. There’s also a “Sand” colour variant which is Rs 24,000 dearer than the red colour variant. Bookings have already commenced across Ducati dealerships in India and the bike competes against the BMW R 1250 GS and Triumph Tiger 1200 XCx.