The upcoming premium midsize SUV will lock horns with the Jeep Compass, Skoda Karoq and the Hyundai Tucson 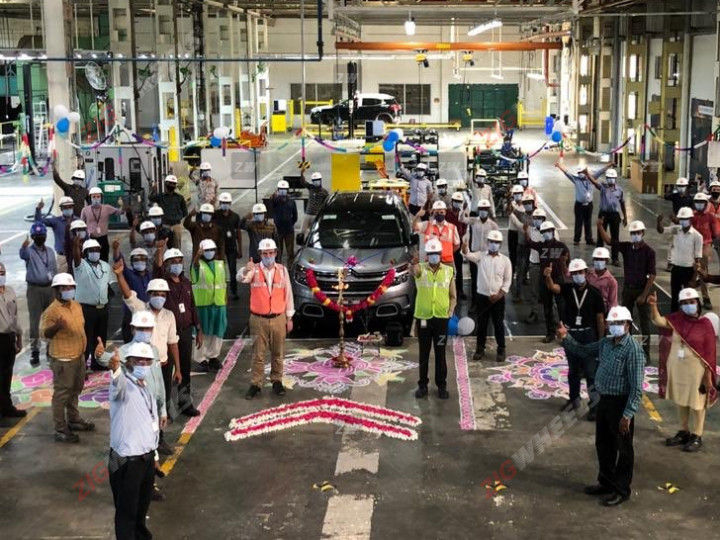 Citroen will soon start its Indian innings with the C5 Aircross whose trial production has now commenced. Coming in as a CKD, the C5 Aircross will be assembled by PSA in collaboration with CK Birla Group at their Thiruvallur plant in Tamil Nadu.

The Citroen C5 Aircross was expected to reach showrooms by mid-year. However, the nationwide lockdown halted proceedings, pushing the launch of the upcoming SUV to early 2021. The India-spec model has also been spotted testing plenty of times and you can have a closer look at it here.

It looks chic and has an air of French flair to its design. Its crossover stance is quite a departure from the muscular stance of something like a Jeep Compass. It features funky bits like tasteful red inserts, sleek Citroen grille, and rectangular elements in the LED tail lamps that give it a premium look.

There are a few funky elements on the inside as well. We particularly like the split AC vents which look rather unique. The central console comes with a large 12.3-inch infotainment system and the driver is pampered with a digital instrument display.

Other notable features include Apple CarPlay and Android Auto, dual-zone climate control, a panoramic sunroof, cruise control, and keyless entry with push button start. On the safety front,  it comes with multiple airbags, ABS with EBD, and front and rear parking sensors.

In terms of engine options, expect the C5 Aircross to be offered with both petrol and diesel options. The petrol variants could be powered by a 180PS 1.6-litre unit while the diesel motor could be a 176PS 2.0-litre unit. Both engines are likely to be offered with a manual and automatic gearbox.

Prices for the C5 Aircross are likely to begin from Rs 20 lakh (ex-showroom). If priced right and backed up by a strong aftersales network in the country, the C5 Aircross could have a good start in the country. It will lock horns with the Jeep Compass, Skoda Karoq, and the Hyundai Tucson.